Hollywood filmmaker and podcaster Kevin Smith becomes one of the first people to release a full film as an NFT.

NFTs – non fungible tokens – are fueling a frenzy among artists and investors looking to cash in on the market that has ballooned by as much as $1.5 billion so far this year.

These digital collectibles are irreplaceable assets that can be bought or traded like any other piece of property. But unlike a painting you can hang on your wall, buying an NFT is like owning an encrypted jpeg. That jpeg can be downloaded on your computer, but it really exists on the blockchain Ethereum, which drives the second largest cryptocurrency platform behind Bitcoin.

WANT TO BUY AN NFT? HERE'S WHAT TO KNOW

"They have similar property rights that you would associate with physical things," said Devin Finzer, the founder and CEO of the marketplace OpenSea, which has traded over $250 million in NFTs, told FOX Business.

"You could throw it in the trash, give it to your friend, go and put it for sale on eBay or Craigslist. These new types of digital items give you this similar freedom."

The once-niche marketplace for NFTs has been around since 2017 and was largely shielded from the masses because of the jargon of blockchain, which is a digital ledger of irreversible transactions.

But now – as top artists like Damien Hirst and Beeple are selling their artwork for millions as NFTs – local artists, investors and crypto-fanatics are not only starting to take notice, but are rushing to spend billions in digital tokens.

"In the creator market, you know, there has been a lot of an influx of supply," said Finzer. "All the people who want to be creative and distribute content and monetize it, I think is a lot bigger than just a billion dollars so far."

With fees paid back to the artist every time a token is bought or traded, many sellers are incentivized by the guaranteed royalties. On the other hand, some investors see these tokens as a more efficient blockchain powered currency – like Bitcoin – that possesses the potential for a flip.

"A unique, irreplaceable, not interchangeable asset like a painting is not a new concept," Christopher Volberg, who just started trading NFTs in the past year, told FOX Business. "What is new is the token element to it, which is the blockchain technology."

Decentralization and immutability make blockchain unique, but with no backing from a major financial institution, there’s no accountability for a fraudulent transaction or a stolen NFT. But despite security pitfalls, the emergence of Ethereum represents the evolution of the utility of blockchain.

"So sky's the limit as it relates to the blockchain, whether it's being integrated with the way that the Federal Reserve uses fiat currency, or whether it is more prominent artists looking to get into the NFT space and in that way helping it to continue to grow," said Volberg.

Marketplaces like NBA Top Shot – which exclusively sells top moments from NBA history – trades more than 7.6 million NFTs, and expands on digital tokens’ collectability with limited-edition packs that drop online and are sold off in minutes. 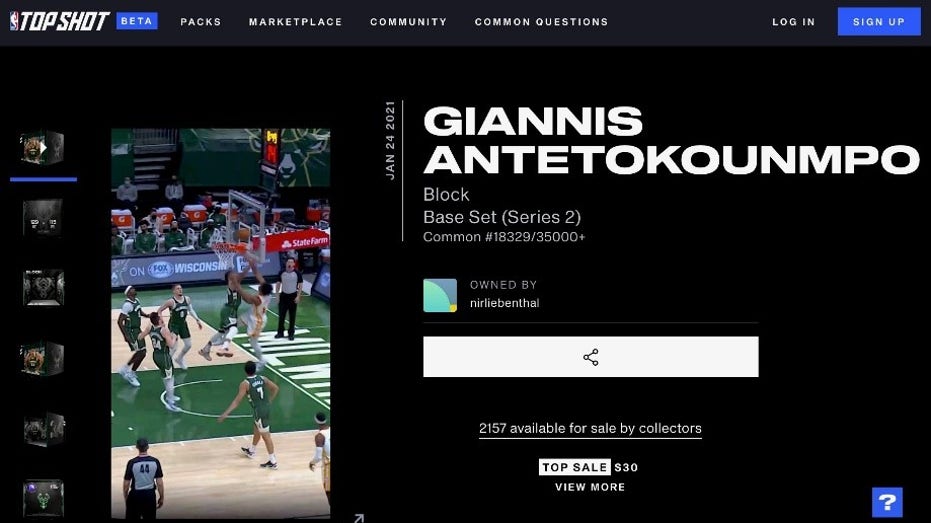 "This is more fun for me than trading stocks," said Nir Liebenthal, an animator based in Los Angeles who bought an NFT of the "Greek Freak" Milwaukee Bucks player Giannis Antetokounmpo blocking a shot.

Liebenthal and his friend, filmmaker Noah Morse, both bid on Top Shot pack drops and purchased their favorite NBA moments to not only collect the moments but also to turn a profit. 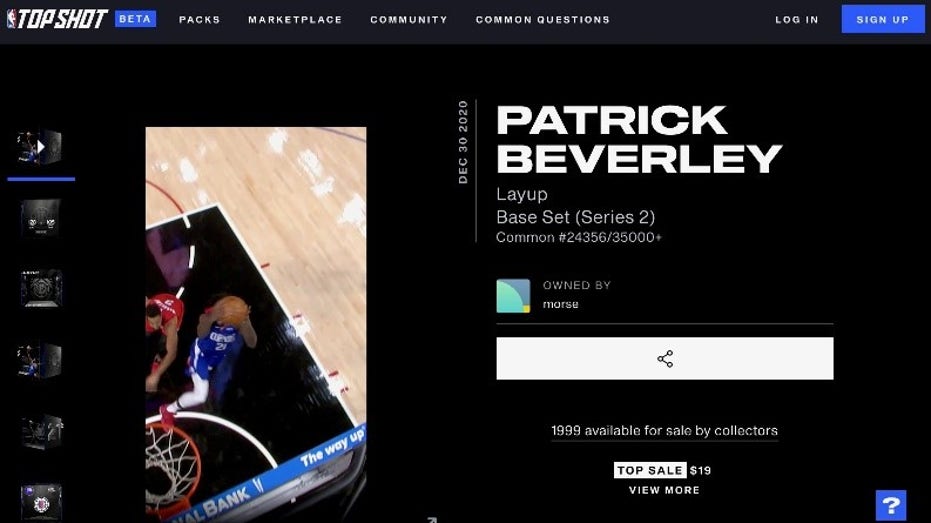 "It’s great to have a collector’s moment, but I don’t actually care about owning a trading card," said Morse, who bought an NFT of Los Angeles Clippers' player Patrick Beverley doing a lay-up. "I just want to see if I can make money off of it."

But Finzer disagrees with this strategy. "I think viewing them as an investment is not very wise," he said.

"They can go up in price, but it’s more around the utility or the collectability or the support of artists that I think is particularly compelling."