The United Kingdom had barely emerged from a 10-day period of mourning for the Queen before it was staring down the barrel of a currency crisis last week, as the pound plunged to record lows.

There are now predictions the country faces even sharper interest rate rises, and the Bank of England has stepped in to head off a crisis in its pension system. What is behind the financial turmoil in the UK, and what consequences might it have? 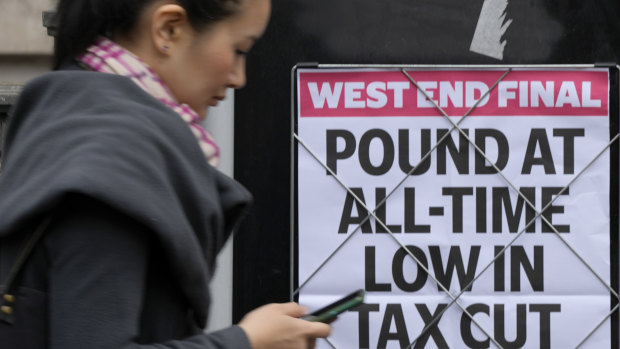 The currency market response to the UK government’s planned tax cuts was brutal.Credit:AP

The pound collapsed this to record lows against the US dollar, which sparked worries in global financial markets and ultimately led to emergency moves from the Bank of England.

The plunge in the pound occurred alongside a surge in yields on UK government bonds (known as gilts) which in turn triggered a crisis in parts of the UK pension market.

The Bank of England responded by unleashing an emergency bond-buying program, which has caused yields to retreat in recent days.

Why did it happen?

Experts say the UK government’s mini-budget or “fiscal event” the previous week is to blame for the turmoil. New Prime Minister Liz Truss and her chancellor, Kwasi Kwarteng, had unveiled £45 billion ($75 billion) in tax cuts, mainly for high income earners, and the market reaction was brutal.

The pound tanked as investors worried about a blowout in the budget deficit, and the risk that tax cuts would worsen the UK’s inflation problem.

National Australia Bank’s head of FX strategy, Ray Attrill, says the extent of the tax cuts came “out of the blue” to international investors – who play a crucial role in funding UK government borrowing. “International markets took compete flight at the potential financial and funding implications of the plan,” Attrill says.

Even before the shock move, the UK economy had inflation of 9.9 per cent and a high current account deficit. The current account measures key transactions between an economy and the world, including imports, exports, and income flows, such as dividends.

Markets worried the tax cuts would push inflation even higher, because when households get a tax cut they have more cash to spend. This is the opposite of what central banks – including the Bank of England – are trying to achieve by raising interest rates.

The surge in bond yields threatened to create a crisis in parts of the UK pension system, because of the role long-dated bonds play in defined-benefit pension schemes. The Bank of England’s bond-buying program is a temporary move aimed at ensuring financial stability. But it still works against the central bank’s goal of tackling inflation, as AMP chief economist Dr Shane Oliver observes.

“You’ve got this perverse situation where the Bank of England is both easing and tightening at the same time,” Oliver says.

The volatility could have a major impact on the UK economy by causing a surge in borrowing costs for the government and households.

The surge in bond yields is a sign that investors expect aggressive interest rate rises from the Bank of England, as it tries to get on top of its inflation problem. Its chief economist, Huw Pill, last week made it clear there would be a “significant” response from the central bank at its next rate-setting meeting in November.

“Taken in conjunction with the macroeconomic impact of ensuing market developments, it is hard to avoid the conclusion that the fiscal easing announced last week will prompt a significant and necessary monetary policy response in November,” Pill said.

Oliver says there’s an expectation the Bank of England will raise its interest rates by about 1.25 percentage points at its next meeting. That’s more than double the size of the recent Reserve Bank rate rises.

‘You’ve got this perverse situation where the Bank of England is both easing and tightening at the same time.’

The rapid change in interest rate expectation has prompted UK banks to pull hundreds of mortgage products from the market because of difficulties in pricing their interest rates, and there are predictions of big house price falls.

What does it mean for the global economy and Australia?

The UK market volatility made ripples around the world, causing Australian bond yields to jump last week, although they have since retreated.

AMP’s Oliver says an event such as this would not normally have global impacts, but it did this time because markets are on edge over how rising interest rates might cause financial problems, and investors “smelled a crisis”.

“The basic problem globally is just hawkish central banks and high inflation, and the UK episode just added a sense of crisis on the sidelines,” he says.

All the same, Australia’s direct economic exposure to the UK is limited, as it is not a major trading partner, despite the strong cultural links between the countries.

Commonwealth Bank’s head of international and sustainable economics, Joseph Capurso, says: “I don’t see long-term ramifications for Australian financial markets or the Australian economy. If it was China, it would be a big deal.”