The man was arrested after police had issued multiple warnings to the crowd at a protest in the city’s Causeway Bay shopping district that they might be in violation of the law, according to a police statement on Twitter.

Details of the arrest were not immediately available. Hong Kong police said on Facebook they had arrested over 30 people on various charges, from unlawful assembly to the violation of the national security law.

The law, imposed by China after last year's anti-government protests in the semi-autonomous territory, took effect Tuesday at 11 p.m. (1500 GMT).

The law makes secessionist, subversive, or terrorist activities illegal, as well as foreign intervention in the city's internal affairs. Any person taking part in secessionist activities, such as shouting slogans or holding up banners and flags urging for the city’s independence, is in violation of the law regardless of whether violence is used. 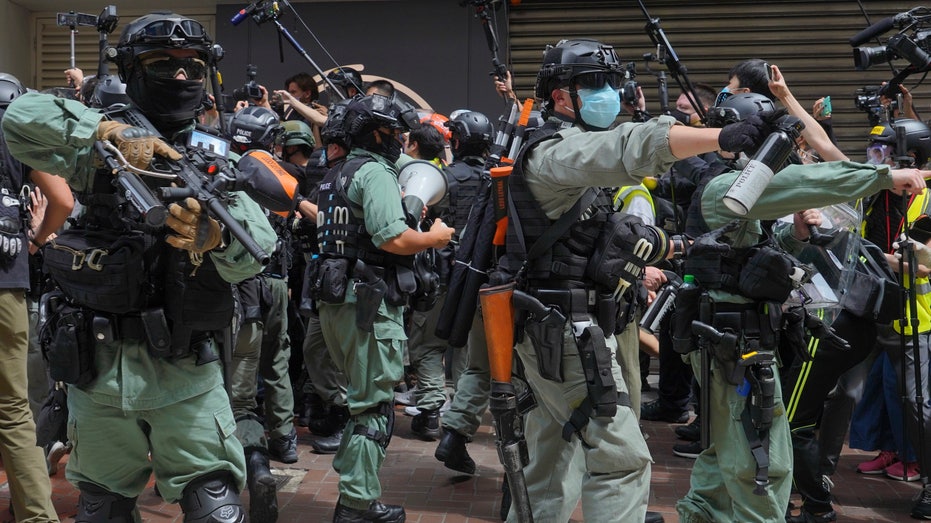 Police spray pepper spray towards protesters in Causeway Bay during the annual handover march in Hong Kong, Wednesday, July. 1, 2020. Hong Kong marked the 23rd anniversary of its handover to China in 1997, and just one day after China enacted a natio

The most serious offenders, such as those deemed to be masterminds behind the crimes, could receive a maximum punishment of life imprisonment. Lesser offenders could receive jail terms of up to three years, short-term detention or restriction.

“The enactment of the national law is regarded as the most significant development in the relationship between the central authorities and the HKSAR since Hong Kong’s return to the motherland,” chief executive Carrie Lam said in a speech, following a flag raising ceremony and the playing of China’s national anthem.

“It is also an essential and timely decision for restoring stability in Hong Kong,” she said.

A pro-democracy political party, The League of Social Democrats, organized a protest march during the flag-raising ceremony. About a dozen participants chanted slogans echoing demands from protesters last year for political reform and an investigation into accusation of police abuse.

The law’s passage Tuesday further blurs the distinction between the legal systems of semi-autonomous Hong Kong, which maintained aspects of British law after the 1997 handover, and the mainland’s authoritarian Communist Party system. Critics say the law effectively ends the “one country, two systems” framework under which Hong Kong was promised a high degree of autonomy.

The law directly targets some of the actions of anti-government protesters last year, which included attacks on government offices and police stations, damage to subway stations, and the shutdown of the city’s international airport. Acts of vandalism against government facilities or public transit can be prosecuted as subversion or terrorism, while anyone taking part in activities deemed as secessionist would also be in violation of the new law. 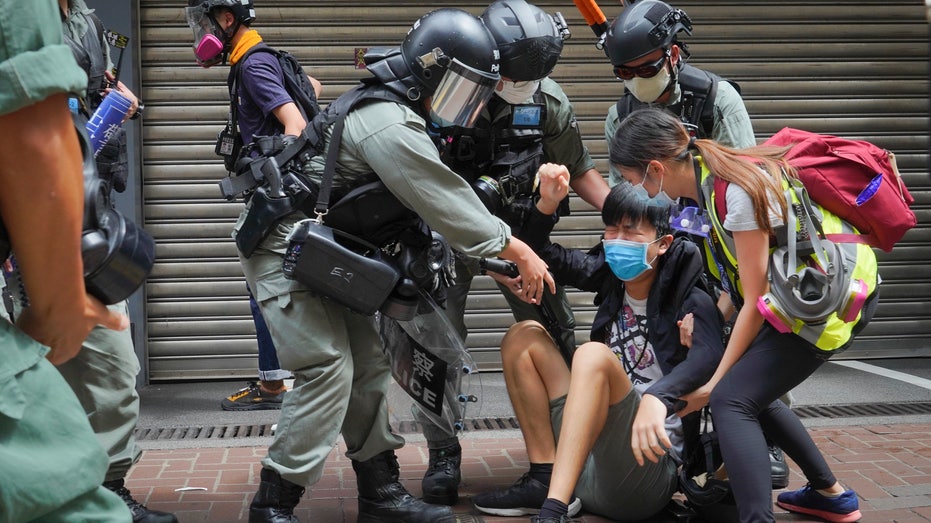 A reporter is helped by police and others after being with sprayed pepper spray in Causeway Bay before the annual handover march in Hong Kong, Wednesday, July. 1, 2020. Hong Kong marked the 23rd anniversary of its handover to China in 1997, and just

Pro-democracy lawmaker Claudia Mo said in a news conference that the new law did not abide by rule of law and was a dire warning to the free press.

“This would tell you that they want not just to get us, but to intimidate us into inaction, into a catatonic state,” Mo said.

CHINA TO IMPOSE VISA RESTRICTIONS ON US INDIVIDUALS OVER HONG KONG

Hong Kong's police force had said they would consider as illegal any flag or banner raised by protesters deemed to be promoting Hong Kong's separation from China or expressing support for independence for Tibet, Xinjiang and the self-governing island democracy of Taiwan that China claims as its own.

Police will use a new purple flag to warn protesters if they display banners or shout slogans that may constitute a crime under the law and could be arrested and prosecuted for violating it.

Concerns have also been raised over the fate of key opposition figures, some of whom have already been charged for taking part in protests, as well as the disqualification of candidates for the Legislative Council elections scheduled for September.

Schools, social groups, media outlets, websites and others unspecified will be monitored and their national security awareness will be raised, according to the law's text, while China’s central government will have authority over the activities of foreign non-governmental organizations and media outlets in Hong Kong. 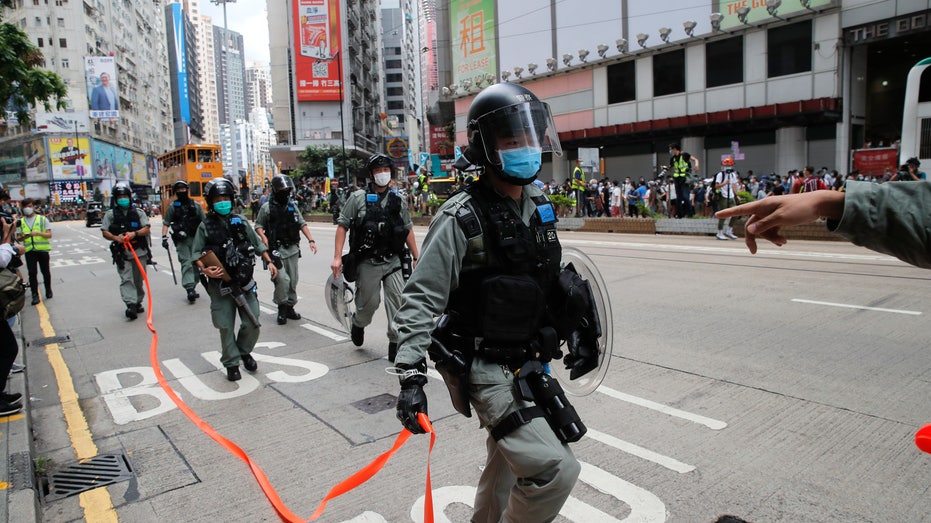 Police set up parameter line to control movements of protesters during a protest in Causeway Bay before the annual handover march in Hong Kong, Wednesday, July 1, 2020. Hong Kong marked the 23rd anniversary of its handover to China in 1997, and just

The legislation was mandated under Hong Kong’s local constitution but an earlier attempt to pass it in the city’s legislative body in 2003 was shelved in the face of massive public opposition. Having lost patience, Beijing finally decided to circumvent the Hong Kong legislature and have it passed Tuesday by the Standing Committee of the National People’s Congress, China’s rubber-stamp parliament.

President Xi Jinping signed a presidential order putting the law into effect and it has been added to the Basic Law, Hong Kong’s constitution.

In Beijing, the executive deputy director of the Cabinet’s Hong Kong affairs office said Hong Kong people were allowed to criticize the ruling Communist Party but could not turn those complaints “into actions.”

“I think the opposition fronts in Hong Kong should seriously reflect on themselves and make some adjustment,” Zhang Xiaoming told reporters Wednesday.

The U.S. is moving to end special trade terms given to the territory. The Trump administration has also said it will bar defense exports to Hong Kong and will soon require licenses for the sale of items that have both civilian and military uses.

Congress has also moved to impose sanctions on people deemed connected to political repression in Hong Kong, including police officials, while Britain has said it could offer residency and possible citizenship to about 3 million of Hong Kong’s 7.5 million people.

China has said it will impose visa restrictions on Americans it sees as interfering over Hong Kong.

U.S. Secretary of State Mike Pompeo denounced the threat of a visa ban as a sign of “how Beijing refuses to take responsibility for its own choices" and said the law's adoption “destroys the territory’s autonomy and one of China’s greatest achievements."

Beijing’s “paranoia and fear of its own people’s aspirations have led it to eviscerate the very foundation of the territory’s success," Pompeo said in a statement.

Taiwan on Wednesday opened an office to facilitate migration from Hong Kong.

The establishment of the office is “not only a statement on Taiwan’s support to Hong Kong’s democracy and freedom, but also highlights our determination to care for Hong Kong people,” said Taiwan’s Mainland Affairs Council minister Chen Ming-tong at a ribbon-cutting ceremony.

Latest Posts
FamilyMart Buyout Set to Open Yet Another New Slot on Nikkei 225
Amy Kennedy Defeats Democratic Machine In South Jersey House Primary
Dr. Fauci’s Dire Warning As Daily COVID Cases Reach Second Highest In US
U.K. Jobs Plan, Hong Kong Peg, Supply Chain Managers: Eco Day
U.S. Threat on Hong Kong Dollar ‘Self-Defeating’, Say Economists
Recent Posts
This website uses cookies to improve your user experience and to provide you with advertisements that are relevant to your interests. By continuing to browse the site you are agreeing to our use of cookies.Ok