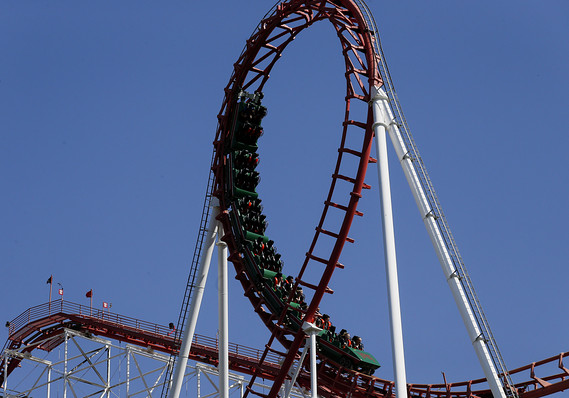 Even as coronavirus concerns upended financial markets over the past week, exchange-traded fund investors have behaved in a very peculiar way.

They have been relatively rational.

That’s even as U.S. markets saw their worst two-day slide in stocks on record.

Investors have trimmed their exposure to Japan, one of the countries hardest-hit by the virus contagion. They have “reined in their risk tolerance,” in the words of CFRA analyst Todd Rosenbluth. And they are snapping up lower-cost versions of popular investing strategies. What they are not doing is panicking and stuffing money under the mattress.

Those observations come from CFRA’s data showing the past week of flows in and out of ETFs, through Monday. The 10 funds that saw the biggest inflows are shown in the table below. While there are some self-evident themes — investors are snatching up bonds in a risk-off climate — there are some trends that may be less obvious.

For example, far and away the biggest recipient of flows was the Vanguard Total Stock Market ETF. But the single-biggest loser during the week was the SPDR S&P 500 ETF Trust. Funds with the biggest outflows are in the table below.

What’s the difference? As MarketWatch has previously reported, SPY is a broad stock-market index fund that’s favored by institutional investors because of its liquidity. Inflows into funds like VTI and another Vanguard product, VOO, which picked up nearly $90 billion over the past week, are more likely representations of individual investors calmly plowing their money into the lowest-cost, broadest exposure stock funds available. (VTI charges an expense ratio, or management fee, of just 3 basis points, cheaper than the 9.45 basis points SPY charges. That means that for every $1,000 invested in that fund, a fee of 94.5 cents will be charged.)

“What I don’t see here is panic,” Rosenbluth said in an interview. “The buy-and-hold ETF investor doesn’t seem as fazed by the past week as the liquidity-focused institutional audience.”

But the big players aren’t exactly freaking out, either. They are shifting money out of Japan, as noted, probably to the benefit of Europe — a market-cap-weighted index of large- and midcap stocks in developed European countries was the tenth-biggest gainer in the past week. They are selling financials — XLF was one of the biggest losers — which makes a lot of sense as interest rates have fallen off a cliff and the yield curve has inverted even more. They are also pulling sharply away from junk bonds, a step that makes a lot of sense in uncertain times.

To be sure, there are some curiosities among the data. Amid concerns about a global economic slowdown and massive disruptions to supply chains, the fourth-biggest set of inflows went to a fund that tracks industrial stocks. “There’s a lot of noise in the data,” Rosenbluth noted.

Still, the information overall tells a straightforward story. With about $1.3 billion flowing into funds amid all the upheaval, there’s still demand for ETFs, Rosenbluth noted. “Money is flowing in while uncertainty is accelerating,” he said.