One of Australia’s largest investors says he is concerned aggressive rate rises could cause “more harm than good” as central banks attempt to slow the economy and tame inflation.

For an unprecedented fourth consecutive month, the Reserve Bank of Australia raised the official cash rate on Tuesday by half a percentage point, taking the rate to 1.85 per cent. 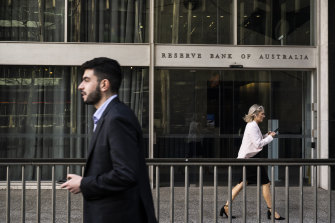 The Reserve Bank has lifted official interest rates by 1.75 percentage points in four months, its most aggressive tightening move in nearly 30 years.Credit:Louise Kennerley

Money markets are pricing in more increases to a peak of about 3.25 per cent in early 2023, followed by a 0.25 percentage point cut in the second half of the year. This would take the cash rate to 3 per cent.

On an $800,000 mortgage, the cumulative increase in monthly repayments since the RBA started tightening monetary policy is $770.

AustralianSuper chief Paul Schroder, who has led the $261 billion super fund since October last year, said on Tuesday that the rising cash rate showed policymakers were trying to slow an overheating economy.

“We think it’s inevitable you have to slow it down. What we want to try and achieve is a slowdown which is a smooth slowdown, and that they can thread the needle to slow it down without crashing.”

However, he said there were risks associated with aggressive monetary tightening.

“What we really want to make sure is that the policymakers are very sensitive to the real-world economy impacts of their decisions,” he said.

“Our concern is that the Fed or Reserve Bank or any other central banks in their efforts to slow the economy down, pull the brakes too hard, stomp on the brakes, and cause more harm than good. That’s definitely a concern we have.”

In the RBA’s statement on Tuesday, governor Philip Lowe said the board expected to take further steps as it worked to “normalise” monetary conditions over the months ahead, but they were “not on a pre-set path”. He also said it was important to tame inflation while “keeping the economy on an even keel”.

Future interest rate decisions would be guided by incoming data, he said, including wages data, which will be published in the next fortnight.

Deloitte Access Economics lead partner Pradeep Philip said the predominant drivers of inflation in Australia were imported, such as the energy crisis sparked by Russia’s invasion of Ukraine. The Reserve Bank needed to be cautious and determine what was driving inflation domestically. 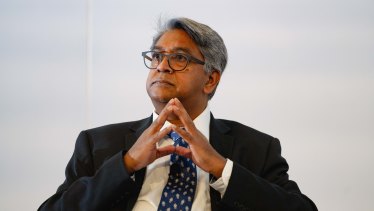 “We’re saying it’s time to be a bit cautious. And make sure that the next step is even more data driven. Let’s look for the evidence of those domestic drivers before we take the next step,” he said.

“The banks have been worried that everyone thinks they’re weak on inflation, so they have to show they’re tough on inflation because they wanted to establish their credibility. I think they’ve done that. Four in a row … we haven’t done this in a long time.

“They’ve gone hard. We’re seeing signs of slowdown. We’re getting close to normal, the global economy is slowing. Are there a few more rate rises likely? Probably, because inflation still hasn’t peaked. But at this point, having done this work, just be cautious, wait for more evidence.”

Economist and former Labor MP Craig Emerson said there were still questions around how much inflation was being driven by transitory, rather than ongoing, factors.

“Let’s make sure that we’ve got the right data and then make the right decisions rather than have any preconceptions,” he said.

Emerson said another 50-basis-point rise in September followed by a quarter of a percentage point in the months following, would be too far.

On Tuesday, leading banking analyst Jon Mott from Barrenjoey estimated homeowners with about $200 billion in mortgages – about 10 per cent of the Australian home loan market – would be at risk of falling behind on their repayments if official interest rates climbed to 3 per cent.

Mott underlined the risk of mortgage delinquency among borrowers who had borrowed at or near their capacity, singling out those in the high-priced Sydney and Melbourne markets. If the cash rate climbed to 3 per cent and stayed at this level, Mott said, “a large proportion of these customers are likely to become delinquent”, as their financial situation would reach the limits of the stress tests undertaken by banks.

Atlas Funds Management chief investment officer Hugh Dive said he was starting to think the Reserve Bank might not go as hard or as fast as some financial markets were tipping. He sees it topping out around 3 per cent, “potentially with a bit of a pause to see the impact because monetary policy is a very blunt instrument”.

“They don’t necessarily want to send a lot of homeowners to the wall,” he said.

“To juxtapose that, we’ve been at zero rates for quite a long time and it’s hard to justify close to zero rates that when you’ve got the lowest employment laws since the early 1970s, we’ve seen a 30 per cent move in house prices since January 2020, and the economy is facing a lot of inflation. So normalisation of interest rates has to occur at some stage.”