Credit Suisse Group moved to contain the fallout from two of the worst hits in its recent history with a surprise capital increase and a sweeping overhaul of its business with hedge funds.

Switzerland’s second-largest bank is raising $US2 billion ($2.6 billion) from investors to shore up capital depleted by $US5.5 billion in losses from the collapse of Archegos Capital Management. Chief Executive Officer Thomas Gottstein, who until recently had brushed off concerns that Credit Suisse was taking excessive risks, struck a humble tone on Thursday, vowing to slash lending in the hedge fund unit at the centre of the losses by a third.

Gottstein, in the role for little more than a year, is trying to persuade incoming Chairman Antonio Horta-Osorio that he’s the right person to lead Credit Suisse, after the bank was hit harder than any competitor by the collapse of Archegos, the family office of US investor Bill Hwang. The timing could hardly have been worse, coming just weeks after the lender found itself at the centre of the Greensill Capital scandal, when it was forced to freeze a $US10 billion group of investment funds. 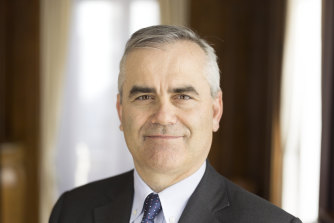 The Archegos collapse has put fresh pressure on Credit Suisse chief executive Thomas Gottstein who has been trying to move Credit Suisse on from a string of bad headlines.Credit:AP

“Clearly this loss came as a big surprise,” Gottstein said about Archegos. “Is it an isolated case? I definitely hope it is and I think it is, but we are obviously reviewing the entire bank now just to make sure that our risk processes and systems are where they should be.”

Credit Suisse fell as much as 6.9 per cent in Zurich trading and was 5.3 per cent lower as of 1:54 pm local time, taking this year’s losses to about 22 per cent. It’s the worst-performing major bank stock this year and has also suspended a share buyback and cut the dividend.

Having taken on the position more than a year ago, the CEO had stumbled over other hits before Greensill shattered what was supposed to be a new era of calm. While seeking to placate investors hurt by the losses, he also now faces the fresh challenge of navigating enforcement proceedings announced by Swiss regulator Finma on Thursday.

The scandals have left the CEO standing while many once powerful members of his management board had to leave. Gone are investment banking head Brian Chin and Chief Risk Officer Lara Warner, along with a raft of other senior executives including equities head Paul Galietto and the co-heads of the prime brokerage business. Asset management head Eric Varvel is also being replaced in that role by ex-UBS Group veteran Ulrich Koerner.

The bank now plans to reduce risk at the investment bank, including cutting about $US35 billion of leverage exposure at the prime brokerage unit that services hedge funds, Gottstein said in an interview with Bloomberg Television. That’s about a third of the leverage its extends in that business. Going forward, the bank plans to only service clients in that unit if they do business with other parts of Credit Suisse as well, such as the wealth management unit.

“Clearly this [Archegos] loss came as a big surprise. Is it an isolated case? I definitely hope it is and I think it is.”

Bloomberg reported earlier that Credit Suisse was planning a sweeping overhaul of the prime business in an effort to protect other parts of the investment bank, which just had a banner quarter. Yet even as Gottstein was explaining steps to prevent future losses, analysts revived a discussion that has haunted Credit Suisse for the past decade, and which executives had hoped to have put to rest with a painful restructuring under Gottstein’s predecessor — whether it needs such a big investment bank.

“Although capital has been mainly addressed, we still see questions remaining in terms of strategy and risk management,” JPMorgan Chase analysts wrote in a note to investors. “Capital has been clearly the main focus.”

The bank said on Thursday it expects to raise more than 1.8 billion francs ($2.5 billion) by selling notes convertible into stock to core shareholders, institutional investors and high net worth individuals. The sale will help bring the bank’s CET1 ratio — a key metric for capital — nearer its target 13 per cent. That number had dropped to 12.2 per cent at the end of the first quarter.

In addition to the enforcement proceedings announced by Finma, Credit Suisse said that the Swiss regulator has told it to hold more capital to guard against losses by taking a more conservative view of its risk. The bank increased its assets weighted according to risk for both Archegos and Greensill. While the capital raising came after Finma boosted capital requirements, Gottstein said the decision was the bank’s own.

“This was not as a reaction to any request by Finma or any other regulator,” Gottstein said on a call with analysts. “It was our proactive view that, together with the board, we decided to issue these two mandatories and that will really help us also against any possible market weakness over the coming months.”

The Greensill debacle is also far from over. Credit Suisse has so far returned about half the $US10 billion in investor money held by the funds at the time of their suspension. While the bank marketed the funds as among the safest investments it offered, investors are left facing the prospect of steep losses as the assets are liquidated. Credit Suisse is leaning toward letting clients take the hit of expected losses in the funds, a person familiar with the discussions said earlier this month.

“We have good visibility for a large portion of the remaining positions,” Gottstein said. “There are three more distinct positions which we will work through in the next months and quarters. We are not planning to do any form of step-in. We are very clearly focused on getting the cash back to our investors.”

US Investing Championship hopeful Evan Buenger raked in a 131.9% return through August. He shares the distinct spin he's putting on a classic trading strategy that's led to his outsized returns