Coles is battling a Federal Court claim of misuse of market power for predatory pricing on its cigarettes.

Former tobacco store owners Anthony, Rebecca and Michael Rachelle have brought the claim against the supermarket giant which will be heard in the Federal Court on Friday. 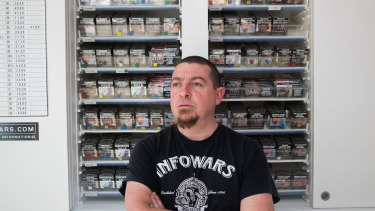 Anthony Rachelle is taking Coles to court over its cigarette pricing. Credit:Jason South

Anthony and Rebecca Rachelle owned a cigarette store in the town of Cowes on Phillip Island and Michael Rachelle owned a store in Kilmore, just north of Melbourne. They claimed their businesses were crippled by Coles' sale of cut-price cigarettes.

The statement of claim accuses Coles of misuse of its market power by selling cigarettes from the big three tobacco companies British American Tobacco, Imperial Tobacco Australia and Phillip Morris, at below supply cost.

"[Coles] has used its substantial degree of market power in the market of acquiring and supplying tobacco products to consumers in Australia, for the purpose of or likely having the effect of substantially lessening competition in the market," the statement claims.

The store owners claim this has aggrieved their customers as they believed the stores were overcharging them, which the business owners said resulted in damage to the reputations of the stores and a significant reduction in tobacco product sales. 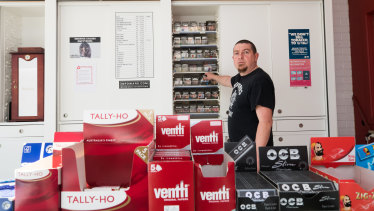 Anthony and Rebecca Rachelle said they were forced to close their store for a three-month period in 2017 and 2018 before closing down and selling the business for $40,000 in August last year, which Anthony Rachelle said "was enough to pay our bank debts".

Anthony Rachelle also made a submission to a parliamentary inquiry into franchising in 2018 in which he and other tobacco franchisees claimed they were bullied by British American Tobacco, Imperial Tobacco Australia and Phillip Morris.

In that submission, he claimed Coles for two years kept selling British American Tobacco products for $30 to $40 cheaper than he could buy them off the tobacco company himself.

Mr Rachelle said due to the lack of action from the franchise inquiry, he had been forced to bring the legal proceedings against Coles.

"My wife Rebecca and I, as well as my brother Michael, are representing ourselves," he said.

"We've spent just over $12,000 so far on getting a solicitor to assist us in preparing our court documents, however, any further representation was going to be completely beyond the realms of anything we could afford, so we're just winging it at the moment. We sold our businesses for next to nothing as the value of them was destroyed."

The matter is listed for hearing in the Victorian Federal Court on Friday.