Challenger chief executive Richard Howes says market crises such as the extreme volatility caused by the pandemic will be a positive for the specialist annuities provider, as it posted a 13 per cent fall in profit for the year.

Shareholders will not be paid a final dividend after Challenger reported investment losses of $750 million and domestic sales for annuities had fallen by $900 million compared to the same time last year.

Annuities are often sold through financial adviser networks and social distancing rules combined with a 16 per cent decline in the number of advisers over the past 12 months had hurt this income stream, the company said. 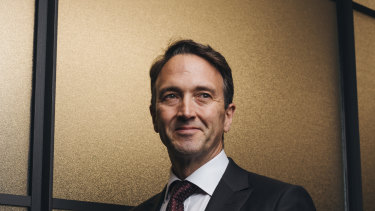 However, Mr Howes said he was taking a long-term view and predicted the company would see growth in demand for annuities – investment products that provide income streams for life – such as occurred after the global financial crisis (GFC).

The post-GFC period was a "pivotal" time for Challenger as retirees became risk-averse and sought out defensive retirement plans, he said.

"I don't think it’s a case of using the crisis – it’s a tragedy and human tragedy we’re living through – but it does serve as a reminder of having important strategies in retirement."

The market rout in March contributed to Challenger's capital arm being covered in a sea of red. The portfolio reported value losses of $463 million in fixed income, $222 million in property, $341 million in equities and $143 million in infrastructure across the year.

The results prompted Challenger's share price to fall by more than 6 per cent to $4.

Chief investment officer Chris Plater said the company had since de-risked its portfolio by selling off all unlisted infrastructure assets and increasing the fixed income component of its investment portfolio to 76 per cent.

The group's capital position was helped by a capital raising in June, that brought in $270 million from institutional investors and $35 million from retail shareholders.

Despite the weaker profit, the group reported its assets under management had grown by 4 per cent to $85.2 billion and as well as 177 per cent growth in offshore annuity sales through its partnership with Japanese insurer, MS Primary.

Mr Howes said a number of structural factors including Australia's ageing population and growing superannuation sector would see strong growth for the company in the next financial year.

"I think there are really important tailwinds which sit behind our business, not least of which is the reminder that severe market disruptions like this create the need to have secure, reliable income streams," he said.

The government is undertaking a review of the retirement income sector and Mr Howes hopes that annuities will become embedded into the country's retirement mix. "Public policy continues to evolve supporting and recognising the retirement phase is under-developed and more needs to be done to develop good outcomes for retirees," he said.