Environmentalists have seized on the visit of BlackRock chief executive Larry Fink to Australia to demand the world's largest fund manager fully divest its holdings of thermal coal producers.

Mr Fink is in Australia this week to meet with major superannuation funds, which have money in BlackRock's offerings. Based in New York, BlackRock is the largest asset manager in the world with US$7.4 trillion ($11.2 trillion) under its control, most of which is in "passive" funds.

Last month the fund manager made global headlines when it pledged to divest its holdings of thermal coal stocks as part of what Mr Fink described as a "fundamental reshaping of finance". 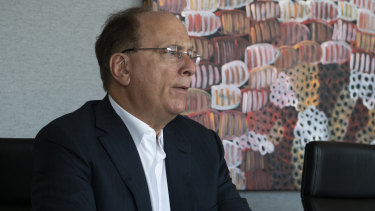 However, the restriction only applies to companies that generate more than 25 per cent of their revenues from thermal coal, thus allowing BlackRock to put money in major producers such as BHP and Glencore. The new policy also only applies to the company's actively managed funds, that make up 27 per cent of total assets, and not its passive products which track the performance of indices.

Market Forces campaigner Will van de Pol said there was growing demand for indexes that screened out thermal coal, oil and gas assets, particularly in Europe.While he welcomed BlackRock's general stance on climate change, he said passive funds should be subjected to the same sustainability filters as active funds.

"Excluding thermal coal from active portfolios is something a lot of investors have been doing for quite some time anyway," said Mr van de Pol. "BlackRock has a far bigger passive portfolio than active."

Lonsec's head of sustainability Tony Adams said it was difficult, but not impossible, to screen out coal companies because these companies often produced both thermal coal – that used for energy – and coking coal, that used to make steel. "There are very few companies that only have thermal coal, no other kinds of coal. It's not a clean line," Mr Adams said.

The Age and The Sydney Morning Herald reported earlier this month that five of the nation's biggest super funds still have billions of dollars invested in coal companies and other fossil fuel producers, much of which is in passive products.

Support among super funds for climate resolutions has also fallen.

A survey by Boston-based researcher Cerulli Associates released this week found 82.4 per cent of Australian institutional investors favoured exclusionary screening as an investment strategy, with tobacco and weapons being the top two assets followed by fossil fuel producers.

"The recent bushfire crisis could be a game-changer, as Cerulli expects to see more investors excluding fossil fuels over the next few years," Cerulli Associates analyst Siau Kean Yung said.

“Window dressing products or marketing products that do not have rigorous ESG screening processes in place will not satisfy those who are seeking sustainable and ethical investments.”

BlackRock said it did not have the discretion to divest from certain companies in its index strategies, but pointed to the work it was doing to double its sustainable exchange-traded fund options, some of which had fossil fuel screens, in the next few years.