The banking regulator is acting to quell the growing financial risks of surging house prices, by forcing banks to be more conservative when assessing how much new customers can borrow.

As cheap debt puts a rocket under house prices, the Australian Prudential Regulation Authority (APRA) on Wednesday said it would require banks to test whether new customers could manage their repayments at an interest rate 3 percentage points higher than the actual rate on the loan. 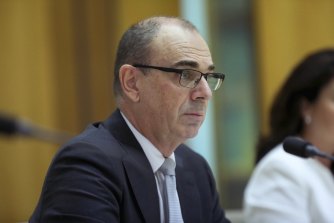 APRA chairman Wayne Byres said the change was aimed at making sure borrowers could afford the debt they were taking on.Credit:Dominic Lorrimer

The change, which compares with current rules requiring customers are assessed on rates 2.5 percentage points higher than the loan’s actual interest rate, will mean many customers will have their borrowing capacity reduced.

APRA chairman Wayne Byres said the move was a response to housing debt growing faster than household income, and growing numbers of customers borrowing more than six times their income, an amount considered to be higher-risk.

“In taking action, APRA is focused on ensuring the financial system remains safe, and that banks are lending to borrowers who can afford the level of debt they are taking on – both today and into the future,” Mr Byres said.

“While the banking system is well capitalised and lending standards overall have held up, increases in the share of heavily indebted borrowers, and leverage in the household sector more broadly, mean that medium-term risks to financial stability are building.”

APRA said the change would affect all new customers, but it was likely to have a larger impact on property investors, who tended to be more leveraged.

It said first home buyers were generally less likely to borrow a high multiple of their income because their borrowing capacity was more constrained by the size of their deposit.