After four straight days of market declines, with no way of knowing how long the coronavirus will stifle the world economy, investors are understandably thinking about safety. But the notion that shares of big consumer-staples companies are the safest plays is easily turned on its head.

“The valuations on anything ‘low-risk’ are really stratospheric, and that creates risk,” according to Charles Lemonides, founder, chief investment officer and portfolio manager at ValueWorks LLC, an investment-management firm with $197 million in assets under management and based in New York.

As this table shows, forward price-to-earnings valuations have stretched over the past year. Before the four-day decline that began on Feb. 20, the S&P 500’s SPX, +0.60% forward P/E valuation was at its highest level since May 2002.

Lemonides said that if an investor is starting out at these high valuations, “if everything goes right, you may not lose money in a year and a half, but if anything goes wrong … you can go to 20 times earnings from 25, and that is a big decline.”

Things that can go wrong include “a hiccup in earnings,” increasing costs or capacity constraints, he said.

• Earnings decline because of a specific problem. Kraft Heinz KHC, -0.88% is an excellent, if extreme, example. The stock declined steadily from June 2017 through May 2019 as the company struggled to adjust to changing consumer tastes. The stock now trades for 11.4 times consensus earnings estimates among analysts polled by FactSet, after trading for a forward P/E as high as 27.8 in April 2015.

• Earnings become lumpy. “You can go from a perceived very steady earnings stream to a bumpier stream, and the multiple goes from 25 to 16 or 13. So trying to find safety in those names is a very risky strategy,” Lemonides said.

The ValueWorks hedge fund run by Lemonides has a short position in Church & Dwight. Lemonides said he had previously shorted Clorox when it traded for 29 times forward earnings, and covered the position at 22 times earnings.

Lemonides called the coronavirus a “tremendous wild card” for investors. It’s easy to point out that the flu infects millions of people each year. The Centers for Disease Control and Prevention estimate that in the U.S. alone, the flu has led to between 9 million and 45 million illnesses and between 12,000 and 61,000 deaths annually since 2010.

Not to make light of the coronavirus tragedy, but those flu numbers dwarf the coronavirus infection and death counts that are causing so much disruption right now. But the quick spread of the virus and the resulting measures being taken have caused a decline in production, especially in China. We simply don’t know how long this will continue or how dramatically it will affect particular companies. 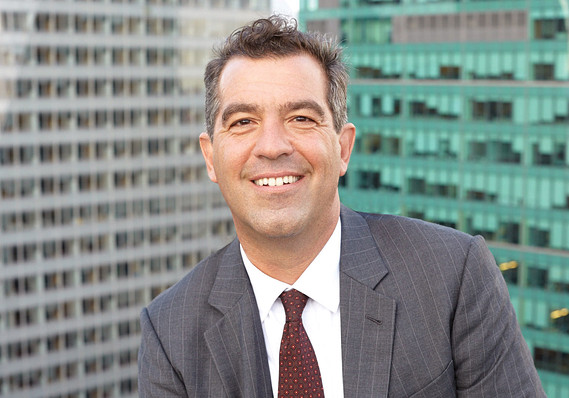 “I do not know what to do about it as an investor, except to hold securities that will turn out fine regardless of what happens,” Lemonides said. He cited stocks he believes are set up for good returns over the next two years for different reasons:

Goldman Sachs GS, -0.30% trades right at tangible book value, according to FactSet, which is low for a profitable bank during a period of economic growth. Lemonides expects Goldman to achieve “consistent” returns on equity from 10% to 15%. “They are doing 12% right now,” he said, adding that because of the low P/E, “you can easily see a 50% expansion just on multiple and expansion to book value. And even if that doesn’t happen, he expects 15% annual earnings growth. “So if your multiple stays the same … you have 15% rate of return,” he said.

Apple’s AAPL, +1.97% forward P/E has increased tremendously over the past year, as the stock price has nearly doubled. It closed at $288.08 on Feb. 25. Lemonides said that despite the multiple expansion, he still likes Apple at this price level because he expects its earnings to increase between 20% and 30% over the next 18 months. “Their brand loyalty is like nobody else’s. Their growth trajectory is extraordinary on 5G,” he said.

Lemonides acknowledged that Apple could face a severe disruption to its supply chain because final assembly of iPhones takes place at factories in China operated by Foxconn Technology 2354, -0.50%FXCOF, +0.00%. “The challenge can be really dramatic” over the next 12 months, he said.

”You have to hold it [ at Apple’s current price] with eyes that it can go down to $190. You then buy more or stay with your investment and look to the horizon,” he said.

Lemonides likes American Express AXP, -0.33% because of its relatively low valuation and because it has weathered the storm after losing its exclusive contract with Costco COST, +1.15% in 2016. AXP’s return on common equity has averaged 30.91% over the past four quarters, according to FactSet.

So Lemonides is satisfied with American Express as a value play, but he is fascinated by the potential for the company to gain entrance into China’s consumer finance market.

The obvious question here: Why would China’s government want to give up its ability to monitor just about every electronic transaction in the country made through Alibaba’s BABA, +2.51% Alipay and similar services?

“Because of a free-trade agreement,” he said, adding that if China doesn’t open up the world’s second-largest consumer market to western financial services companies, “then the trade conflict will not go away.”

“There will be tremendous demand for these services and for an American Express Card if the Chinese government lets it happen,” he said.

If China is opened-up for American Express, Lemonides expects the company’s earnings to increase 30% in two years, with “multiple expansion as those companies are re-rated at 20 times earnings.”

If China doesn’t open up, Lemonides sees 10% to 20% downside risk for American Express — much less than for the consumer-staples stocks listed above.

This one is a long-term recovery play — here’s a chart showing seven years of price action for United Natural Foods UNFI, -1.02% through Feb. 25: 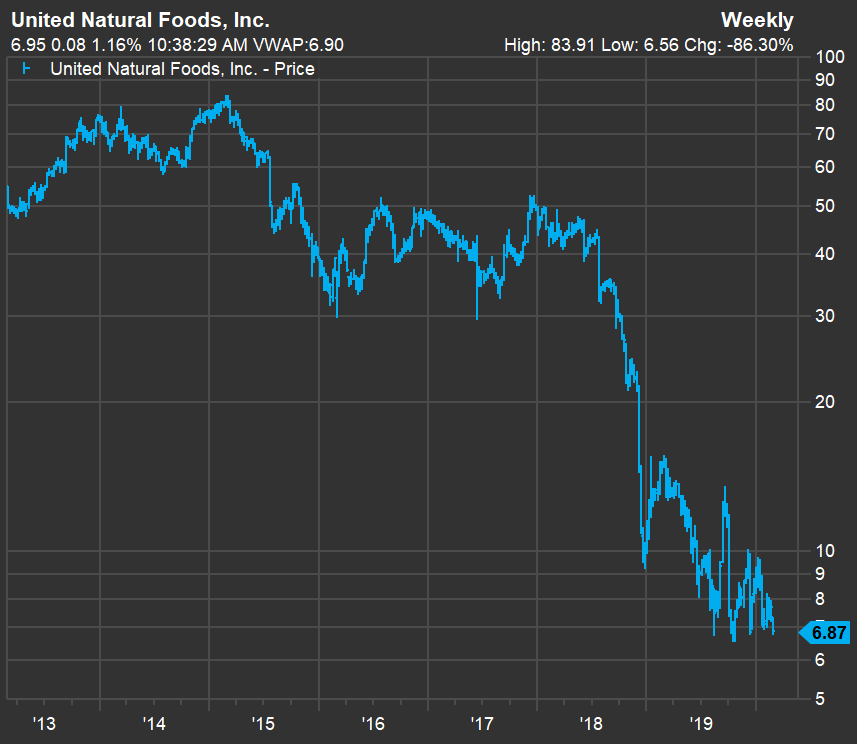 The stock was crushed after United Natural Foods announced in July 2018 that it would acquire Supervalu, a larger food distributor. That deal was completed in November 2018.

Not only did United Natural Foods do something unexpected for a rapidly growing distributor of organic food as it was gaining popularity, it has had difficulty integrating the acquisition, according to Lemonides. The company had $2.82 billion in long-term debt as of Dec. 31, and its market value was $368 million at the close on Feb. 25.

Lemonides estimates the company’s “franchise value” to be $3 billion. With about $600 million in annual cash flow, United Natural Foods can easily cover interest payments and reduce debt, he said. He believes management can return the company to resume its organic growth.

With his estimate that the company can ”easily” increase its annual earnings to $2 a share within the next two years, Lemonides said the stock might increase to a valuation of 20 times forward earnings, which would support a price of $40. The closing price on Feb. 25 was $6.87.

Don’t buy the stock dip yet, says Goldman as it warns coronavirus will wipe out earnings growth this year