If you’ve noticed some delays in your overseas parcels, you’re seeing the tip of the coronavirus iceberg that the world’s supply chain is steaming toward at full pace.

Thanks to the world’s reliance on China to manufacture its goods, virtually everything that has been through the country at some point will be impacted by the deadly virus. 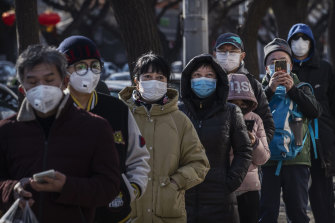 Chinese customers wear protective masks as they line up single file to buy dumplings at a popular local shop in Beijing, China. Due to the world’s reliance on Chinese goods, the impacts of the coronavirus could spread far.Credit:Kevin Frayer/Getty Images

Industry groups and experts warn the price of goods will go up as a result of the crisis and jobs will be shed in sectors such as transport.

Since the outbreak on mainland China, factories in several provinces have been shut down, transport movements heavily restricted and ports closed.

The lack of labour at China’s ports is seeing containers pile up and those stranded ones are impacting empty-container volumes ports.

In WA, the transport industry is bracing for a collapse in container shipments from China and for a huge impact across the state’s economy within two to three weeks.

Western Roads Federation director Matt Bronickis said the supply chain was broken and there would be a fallout across several areas, most noticeably in transport where he expected jobs to be shed.

“If containers aren’t coming in, containers don’t go to warehouses, warehouses don’t restock, they don’t send the transport out to the final destination and then the product on shelf disappears.”

Australian fresh produce exporters could also lose millions with the dumping of their product a real possibility if refrigerated containers sitting on Chinese wharves don’t get access to power supplies.

“The shipping lines are potentially going to call a force majeure and abandon those containers,” Mr Bronickis said.

“If that happens for them there is a short loss but for the exporter, there is a massive loss which then has a flow on to insurance.”

Mr Bronickis called on the WA government to assemble a roundtable of industry heads to discuss the virus’ impacts, a request a government spokesman said they were happy to accommodate.

How the virus will impact households

Curtin University School of Management supply chain expert Paul Alexander said shop shelves would change over the next 12 to 18 months.

“There will be disruptions where you'll find things are going out of stock,” he said.

“There may be some brands that disappear and they make take a while to come back if they do at all.

“Specific things you wanted will just not be there for a while and that might push the price up as well.

“We’re all going to pay for this.”

Professor Alexander wasn’t convinced the coronavirus outbreak would change global reliance on China as a manufacturer.

“The reason we buy from China is not because we couldn’t think of anyone else to buy from, it is because they do that stuff cheaply and it is not going to change any time soon,” he said.

At its half-year results briefing on Wednesday Wesfarmers, owner of major retailers such as Bunnings and Kmart said it was looking at alternative suppliers of stock in case the virus disrupted current supply.

House for sale in London, good location, overlooks park, a bargain at £185m