It is October 17, and the US is just hours away from a historic and highly damaging default on its debt.

The scenario could be from the pages of a financial thriller: money in the world’s largest economy is at risk of running dry in just over two weeks. On Tuesday, Treasury Secretary Janet Yellen said the US will hit its $US28.4 trillion ($39.6 trillion) debt limit on October 18 unless a temporary funding solution is found by Congress. 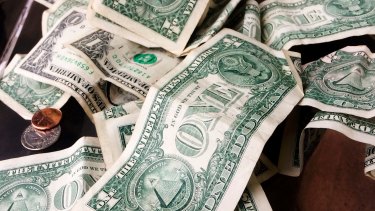 The US is weeks away from defaulting on its debt.Credit:AP

The stock market is at risk of turmoil, while the US government is facing a blow to its reputation. Some politicians are advocating the Biden administration reach for a nuclear option: mint a $US1 trillion coin.

With Democrats and Republicans in deadlock over raising the debt ceiling, creative options are being put forward. One loophole gaining traction is for the Treasury to mint a “commemorative” coin, allowing it to theoretically create the super high-value platinum token to get the White House out of its borrowing bind.

Bypassing a bitterly divided Congress, it would deposit the coin with the Federal Reserve to reduce the overall debt level, providing needed wiggle room under the debt ceiling.

While the White House has rejected the idea, House Speaker Nancy Pelosi is the latest convert and has argued it is an option being discussed by Democrats.

Paul Ashworth, at Capital Economics, says the proposal is “quite wacky” though remains preferable against the US defaulting on its debt.

“Markets would prefer that the debt ceiling was raised through normal channels in Congress, through legislation,” he says. “But if it came down to a choice of: the Treasury is going to default today, or it’s going to pretend it’s got this $US1 trillion coin and the Fed’s willing to go along with it, then they would prefer them to do that.”

The US has never defaulted before and an administration unable to afford to service its debt would deal a big blow to President Joe Biden’s claims of competent governance after the chaos widely regarded under Donald Trump.

Betting on a last-minute agreement has been the right thing to do every time, and we see no reason why it should be any different this time,” says at . “However, the risk of an ‘accident’ exists.”

Most other countries, including the UK and the majority of Europe, do not put a strict limit on government borrowing although many have breakable fiscal rules that aim to constrain the total. The US, however, has a lethal combination of a strict debt ceiling and extreme partisanship.

Raising the debt ceiling used to be routine for Congress, but avoiding funding crises has become more difficult in the last decade as the two sides of the US government become increasingly opposed.

“It could be a cataclysmic event if the US actually does default on its debts,” says James Knightley, an ING economist. “This triggers a whole crisis of confidence in the US financial system and, by extension, the global financial system.”

While it may seem a simple solution, economists say that creating a $US1 trillion coin has severe drawbacks.

First, some believe it is little more than accounting trickery, meaning that resorting to such a drastic option would likely undermine confidence in the US government. 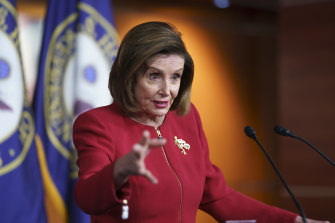 House Speaker Nancy Pelosi says the $US1 trillion coin idea is an option being discussed by Democrats.Credit:AP

Second, it could set a dangerous precedent. Despite independent central banks “printing money” to prop up economies under quantitative easing (QE), allowing politicians access to the printing presses has proved disastrous in the past, not least in Weimar Germany. An increase to the money supply threatens to worsen inflationary pressures that are already on the brink of boiling over.

Knightley says: “You can argue that QE should be inflationary in some respects because it’s helping to lift the economy. But this is just much more a direct transfer of money that’s been magicked up into people’s pockets, because it’s financing government spending.”

Stock markets remain relatively relaxed about the threat of a US default for now. “Betting on a last-minute agreement has been the right thing to do every time, and we see no reason why it should be any different this time,” says Christoph Balz, economist at Commerzbank. “However, the risk of an ‘accident’ exists.”

If a decision comes down to a tie in the Senate, which is split 50-50 between Democrats and Republicans, Vice President Kamala Harris takes the deciding vote. But the Republicans can still block legislation to raise or suspend the debt ceiling through the filibuster, which is only able to be bypassed with 60 votes. The opposing Democrats can still, however, get around this on certain issues through a complicated process called budget reconciliation. This just needs a simple majority.

Linking something so crucial as the debt ceiling increase to a budget reconciliation package is a high-stakes option, particularly when huge divides over spending remain within the Democratic party, between its more conservative wing, including Senator Joe Manchin, and its Leftist arm.

Opinions are divided. The Democrat Senate Majority Leader Chuck Schumer has rejected the solution of a budget reconciliation, warning it take several weeks. Others see it as the last mainstream option on the table.

“It’s not a permanent solution to all of this and it’s not going to do away with the debt ceiling but it is in their hands,” says Knightley. “It’s really high stakes and you can see why people are proposing radical solutions such as this $US1 trillion coin.”

Home appraisals: Everything you need to know

Clients left in limbo as financial advisers head for the exits