He has been dodging his taxes for years. He is a hopeless, failed businessman who never made a dime in his life. He is teetering on the edge of bankruptcy and will take the country down with him. If you happen not to like Donald Trump very much, then the revelation in the New York Times that he paid a paltry $US750 ($1060) in personal taxes for a couple of years will simply confirm your worst fears. He is unfit for office, and the sooner he is gone the better.

But hold on. The tax returns don't show anything of the sort. All they tell us is that the president is a real estate tycoon. Debt, losses and tax write-offs are completely normal in that industry, as they are in many others. His tax returns don't look much different to any busy entrepreneur. In truth, the president's critics would bar anyone apart from career, salaried officials from elected office. And yet the occasional business leader can bring new ideas and energy to government and make lasting, much-needed reforms – even if their tax returns inevitably raise a few eyebrows. 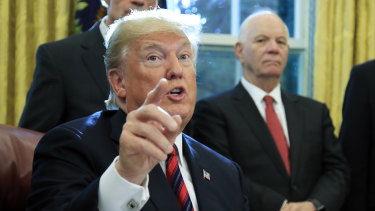 With the election just five weeks away, the race for the White House is still too close to call. Trump could still be re-elected, or his Democratic challenger Joe Biden might easily replace him. Against that backdrop, and with perhaps just a few thousand votes in key battleground states in it, the president's leaked tax returns could well prove explosive enough to cost him re-election.

They show that Trump paid no federal income tax in 10 of the last 15 years. In 2016 and 2017, he handed over the princely sum of $US750 to the federal government. He might have swaggered into office on his reputation as a brilliant businessman. But you wouldn't guess it from his tax returns.

To his critics, that shows two things. The first is that Trump is an inveterate tax-dodger. The second is that, contrary to his image, he has always been a hopeless businessman, creating castles of sand (or rather golf courses and casinos) based on hype and debt but with no real substance. He is either a crook or an idiot, or quite possibly both, and on either count he is disqualified from high office.

If any well-known tycoon occupied the White House, their tax returns might well show something very similar. A mixed picture of losses, debt, consultancy fees, personal loans and possibly not a lot of net tax paid at the end of it.

There are two problems with that analysis, however. The first is the returns don't actually show that. The second is that this would disqualify any tycoon from ever being elected to anything, despite the energy and ideas they can bring to public life.

By the standards of the real estate industry, where Trump has made his career with varying degrees of success, there is nothing especially shocking about the president's tax returns. Most developments are based on a mountain of debt. Not many people build a skyscraper and pay for everything in cash. There are often losses along the way, and write-offs, and it can be a very long time before a profit ever materialises. Often, it never does (which is why banks often lose a lot of money on property loans).

Most critics on the liberal Left take it as given that any big business should be paying lots and lots of tax. Maybe they should. But, in fact, we only tax companies on profits, not on overall sales (for the very good reason that otherwise we would stop anyone ever investing in anything). Lots of great businesses – Amazon most obviously – pay very little tax because they don't make much money.

That is true of lots of companies and lots of entrepreneurs. There is nothing wrong with it. But that doesn't mean they don't create lots of jobs and wealth along the way.

The second, more important, point is this. We shouldn't automatically disqualify business leaders from holding public office. If any well-known tycoon occupied the White House, their tax returns might well show something very similar. A mixed picture of losses, debt, consultancy fees, personal loans and possibly not a lot of net tax paid at the end of it.

By that standard, we would restrict every presidency or prime minister role to salaried, elected officials, who have preferably spent their entire lives in government office, with perhaps the occasional spell in academia or a think-tank (such as Biden, come to think of it, who worked briefly as a lawyer before being elected to the Senate way back in 1972).

And yet it is healthy to have entrepreneurs and business leaders in office occasionally. They do things differently and push through reforms. Trump has a very mixed record in his first term in office (to put it mildly).

And yet there can be no doubt he has brought some much-needed vigour to a country that had lost much of its entrepreneurial energy (remember that under Obama, net business creation fell to zero, a shocking outcome for a country that was once one of the most pro-business in the world). Some of the highest corporate taxes of any developed nation have been slashed. Red tape has been rolled back, under a rule that forces Congress to repeal two regulations for every new one created. And enterprise zones, often only a block or two, have revitalised urban areas. The result was an economy growing more robustly before the epidemic than its rivals and which will recover more rapidly.

Their taxes may be complex. But that is normal, and shouldn't disqualify tycoons from office.

There are lots of reasons for hoping Trump doesn't get re-elected. His oafish sexism, for example, or his bullying manner, his simplistic views on trade, or his muddled management of the COVID-19 crisis. But his tax returns are not one of them.

Latest Posts
Facebook Let Trump Launch New Political Ads After Ban Went Into Effect
Trump Tax Extension Could Cut Millionaires’ IRS Bills by $71,000
Cornyn predicts 2020 elections in Texas 'will be much closer' than in past years
Stocks making the biggest moves after hours: Microsoft, First Solar, FireEye & more
US stocks close mixed as tech surge battles against industrial sell-off | Currency News | Financial and Business News
Recent Posts
This website uses cookies to improve your user experience and to provide you with advertisements that are relevant to your interests. By continuing to browse the site you are agreeing to our use of cookies.Ok