The latest World Bank assessment of the state of the global economy and its outlook makes for gloomy, even depressing, reading with its focus on comparisons with the stagflationary era of the 1970s.

While it likens the current outbreaks of inflation at levels not seen for decades, slumping growth rates amid surging energy and food prices to the period of the oil shocks of the 1970s (when food prices also spiked) the outlook depicted in the bank’s latest Global Economics Prospects report isn’t quite as grim as the experience of the 1970s. 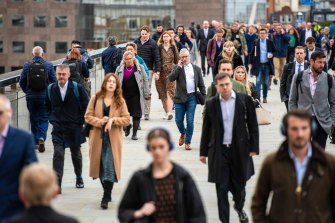 The outlook depicted by the World Bank would be the “sharpest deceleration following an initial recovery from global recession in more than 80 years.”Credit:Bloomberg

Nevertheless, the bank is depicting “a protracted period of feeble growth and elevated inflation” and therefore the risk of stagflation.

It has cut its forecasts for global growth from last year’s 5.7 per cent to 2.9 per cent – well down on the 4.1 per cent it anticipated at the start of the year. Most of the 1.2 percentage points revision between the January and current forecasts is attributable to the effects of the war in Ukraine.

The key strands that support the rather dark assessment have been well-chronicled.

The world is still emerging from the worst of the pandemic, with supply chains yet to return to their pre-COVID condition and periodic outbreaks and lockdowns in China continuing to disrupt global supply chains.

That, and the dramatic levels of the monetary and fiscal responses to the pandemic, ignited inflation in developed economies at levels not seen for four decades and is now producing a belated policy response – the withdrawals of unconventional monetary policies and the liquidity they created and rising interest rates.

The pandemic, and the increased focus on responding to climate change, crimped energy production and investment even as the receding of the recession ignited demand, causing a dramatic rebound in energy prices. The pandemic, floods, droughts, extreme temperatures and labour shortages also impacted global agricultural production.

That was all before Russia invaded Ukraine and exacerbated the energy and food shocks and increased the potential for economic and humanitarian crises in many developing economies.

With Russia and Ukraine key global producers of grains and fertilisers, the combination of significant increases in food prices and the reduced availability of grains in particular is a severe threat to the world’s poorest countries, which also happen to be among the most-indebted at a time of sharply rising global interest rates. 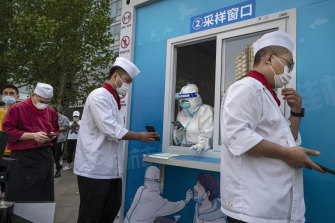 China’s strict COVID measures are just one of the factors battering the global economy.Credit:Getty Images

It’s not just developing countries at risk from the mix of COVID and war-related stresses.

The World Bank expects advanced economies to grow only 2.5 per cent this year, with major recessions in Europe and central Asia.

China’s growth has been downgraded from last year’s 8.1 per cent to 4.3 per cent and Russia’s economy is expected to shrink by 8.9 per cent. Both those forecasts are quite optimistic when compared to most private sector forecasts.

The outlook depicted by the World Bank would be the “sharpest deceleration following an initial recovery from global recession in more than 80 years.” It could, however, still prove too optimistic.

It is obvious that, if inflation in the developed economies proves more stubborn that the World Bank or central banks currently anticipate, interest rates will keep rising until it is brought under control. The experience of the 1970s, when the central banks were slow to respond to the burst of inflation, hasn’t been lost on them.

That would export tighter financial conditions through the rest of the world, probably triggering financial crises in some developing economies akin to the disaster that has unfolded in Sri Lanka.

The war in Ukraine and the efforts by the West to squeeze Russia’s revenues from its energy exports – efforts recently significantly intensified with the bans on insurance for vessels carrying Russia oil – could prolong and intensify the energy shock, adding to the squeeze on supply and forcing already elevated prices even higher.

The impact of the war and sanctions on Russia and Ukraine’s other commodity exports could also feed further into their inflationary effects.

The other source of threat to the already-weak global outlook is the combination of China’s “zero COVID” policy with its imperfect locally-developed vaccine, which has already resulted in abrupt and severe lockdowns of major cities and ports and, given the experience of other economies that have shifted to living with COVID, appears likely to cause more of the same.

While the World Bank appears sanguine that the outlook isn’t for a re-run of the 1970s – primarily because it thinks central banks and other economic policymakers and more flexible economies are better equipped to deal with a period of high inflation rates and low growth rates – the balance of the risks would appear tilted towards the downside.

Those risks are magnified by the record levels of global debt after the most aggressive level of fiscal stimulus (in response to the pandemic) since World War II.

In responding to the initial outbreaks of COVID, debt in the advanced economies grew at about twice the rate as it did during the 2008 financial crisis. Global debt topped $US300 trillion ($415 trillion) last year. It was about $US197 trillion in pre-pandemic 2019.

That, and the inflation rates, limit the ability of governments to respond to the downturn and will amplify the impacts of rising interest rates and reducing liquidity and means an already-weak global economy is especially vulnerable to existing and potential threats.

The World Bank sees anaemic growth for at least the next two years. It is forecasting 3 per cent global growth in 2023.

Unless inflation is brought under control relatively quickly and painlessly and there is a resolution of the war in Ukraine and the increasing disruption to energy, food and other markets it is generating, that looks more like a best-case scenario than the likely outcome.

Dunkin' skips breakfast with Beyond Meat

Russian invasion of Ukraine: How Toyota, Ikea and other companies are responding