Is it possible that the coronavirus could produce the outcome that Donald Trump and the hawks in his administration have sought, but so far failed to achieve?

Trump’s "Make America Great" ambition has been largely about "de-Americanising" the world economy and the multilateral approaches and institutions that have underpinned globalisation.

It is an "America First" campaign that, to succeed, had to diminish China’s increasingly powerful and assertive role in the global economy and geopolitics while repatriating the offshore activity of America’s multinationals. 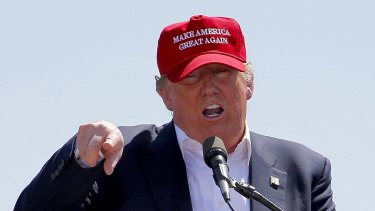 The outbreak of the coronavirus could help Trump achieve his isolationist objectives for America.Credit:AP

The trade war with China was in pursuit of both those goals, as has been America’s withdrawal from multilateral trade pacts like the Trans-Pacific Partnership and its assault on the World Trade Organisation and other multilateral institutions.

While the trade war did have an impact on China’s economy, where the growth rate slowed to "only" 6.1 per cent last year – its slowest in nearly three decades – it also damaged the US economy as its consumers and businesses absorbed the costs of the higher tariffs.

When it effectively ended with the "Phase One" trade truce at the start of this year, it had succeeded only in shifting a modest amount of activity from China to elsewhere in Asia, rather than creating a surge in investment in the US as factories relocated.

The coronavirus threatens to do a lot more damage to China’s economy and geopolitical aspirations than the trade war.

The coronavirus, unless contained within a relatively short timeframe, threatens to do a lot more damage to China’s economy and geopolitical aspirations than the trade war, with major and potentially destructive spill-over effects elsewhere. It could also encourage American economic isolationism.

It is already obvious that the lockdowns of large regions within China will have a material impact on the country's economic growth rate this year and that the flow-on effects through the global supply chains anchored within "the world’s factory" will generate significant damage in other parts of the world.

Economists are debating whether the impact of the virus on China’s economy will be V-shaped, with a quick and exaggerated rebound as activity rebounds, or L-shaped, with a gradual and protracted recovery. 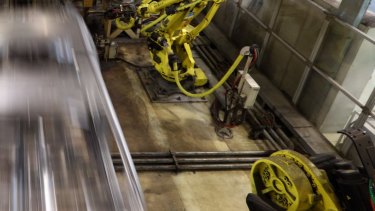 A Hyundai plant in China. Companies like Hyundai and Apple can’t run the risk of having no products to sell.Credit:Bloomberg

Where the growth of China has had deflationary impacts on consumer goods and inflated raw material costs (to Australia’s benefit) over recent decades, it is more than conceivable that those effects will reverse.

If the virus isn’t quickly contained, the effects will be deeper and more structural within China and beyond.

While it appears China’s rate of new infections has peaked, Beijing is now rushing to re-open factories and ramp up production with an inherent risk that lifting lockdowns and freeing up travel will reignite the spread of the virus within China.

The alternative, of course, would have been to accept a deep domestic recession and social unrest.

Moreover, China went into the trade war grappling with severe financial imbalances and threatening debt levels that it was just starting to address. A prolonged shutdown of its economy threatened a financial crisis along with recession and social tensions.

That risk remains and is amplified by the spread of the virus outside China.

China has the most exposure to the global economy and therefore faces both domestic and external threats now with the likelihood that global growth is going to be materially and adversely impacted by both the real and psychological effects of the virus.

With new cases cropping up outside Asia from Europe to South America, and the US authorities resigned to the probability of the illness spreading to the US, global travel and economic activity is being undermined.

The potential for something beyond a sharemarket slump will rise if containment of the virus is a drawn-out process.

The world, including the US, has too much debt and the quality of corporate credit, especially in the US, has been deteriorating because there has been so much cheap central bank liquidity sloshing around the financial system.

If the freezing of the corporate credit market in the US, which is spreading to Europe, were to be prolonged, there will be a lot of highly-leveraged, or over-leveraged, companies experiencing liquidity crises.

If the virus does get a real hold outside China – if it does become a pandemic – there are likely to be destructive and structural real economy and financial system effects.

The virus – even if contained relatively quickly — could help him achieve some of his objectives.