While Congress is deadlocked on another coronavirus relief package that's widely expected to include a second stimulus check, millions of Americans are still awaiting the arrival of their first $1,200 cash payment.

At the beginning of June, the IRS still had to pay out between 30 million and 35 million checks, according to the House Ways and Means Committee. But two months later, the agency "appears to have made little progress towards issuing the remaining payments," a letter from House Ways and Means Chairman Richard Neal and Sen. Ron Wyden, the top-ranking Democrat in the Senate Finance Committee, says.

Between early June and late July, the IRS had made fewer than 1.5 million additional stimulus payments, an "unacceptable pace," the lawmakers said.

"Americans cannot wait any longer for the emergency assistance they were told would arrive in the spring," the letter, dated July 27, said. "Treasury must take immediate and decisive action to pay all eligible Americans."

At the end of June, IRS Commissioner Chuck Rettig testified the agency had distributed some 160 million economic impact payments, worth roughly $270 billion, since April. During that testimony, Rettig said the IRS was dealing with a backlog of paper tax returns and was focused on trying to send stimulus payments to those filers.

More than 14 percent of households making under $50,000 have not received their stimulus payment yet, according to a study released by Prosperity Now, a research and policy organization based in Washington, D.C. An even bigger number — more than 21 percent — of individuals earning less than $25,000 reported receiving a payment.

TRUMP SAYS SECOND STIMULUS CHECK COULD BE 'WAY HIGHER' THAN $1,200

For some Americans, the payments are not automatic: Individuals who normally do not file a tax return — including homeless people, low-income people and others – can register for the payment and must submit their information through the IRS's “Non-Filers” tool by October 15.

Although recipients of Social Security benefits, survivor or disability benefits, or Railroad Retirement benefits automatically received the $1,200 even if they didn’t file a tax return, they are still required to use the non-filer tool to obtain the extra $500-per-child benefit available.

If you submitted your information through the non-filers tool before May 17 and received your stimulus check but it was missing the extra $500 payment for a dependent, the IRS said it began mailing out those payments on August 5.

Starting on Monday, the Taxpayer Advocate Service is going to accept cases from individuals who are missing some of, or all of, their stimulus payments. The watchdog agency said it will help taxpayers determine whether they need to wait until they file their 2020 tax return in 2021 to obtain the cash. 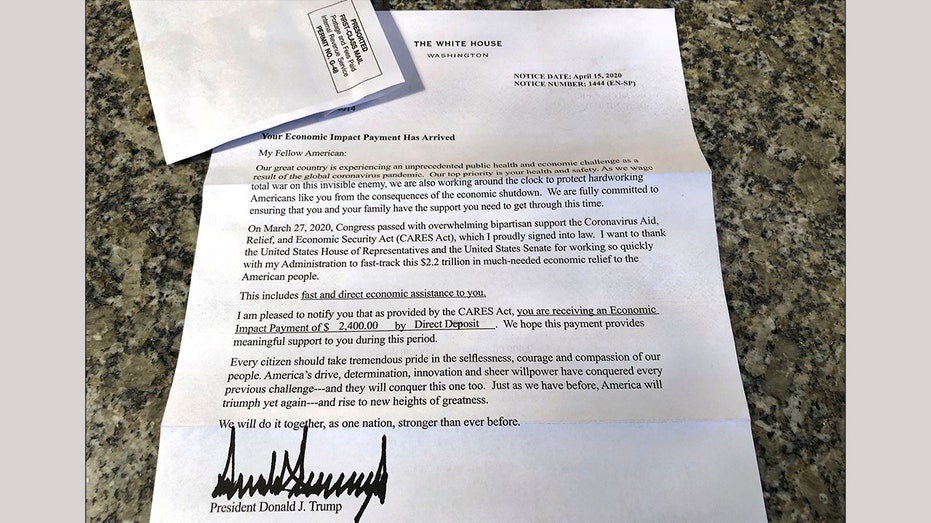 A letter from the Internal Revenue Service, signed by President Trump, notifies a family via U.S. Mail of an economic impact payment direct deposit made to their account. (AP Photo/Charles Krupa)

If the IRS sent you a letter (notice 1444) notifying you that the money was issued but you still have not received the cash, you can request a trace on your payment by calling the agency at 800-919-9835 (be prepared for long wait times) or submitting Form 3911.

The IRS recommends you initiate a trace if it's been:

You should not request a payment trace to determine if: you are eligible for the money, the size of your payment and the scheduled payment date.

You can also track your stimulus check in the mail by using the US Postal Service's Informed Delivery tool.

The money can be substantial, particularly for low-income individuals who qualify for the maximum one-time payment of $1,200 (or $2,400 for couples). The payments are tapered for higher-earners and phase out completely for individuals who earn more than $99,000.