Few could disagree that Geelong is a remarkable success story – a phoenix risen from the ashes.

Not that long ago it was a city on its knees, crippled by the loss of its traditional blue-collar industries, not least the Ford production line, a major employer. The collapse of the Pyramid Building Society in 1990 caused a catastrophic loss of life savings that still casts a shadow decades later. 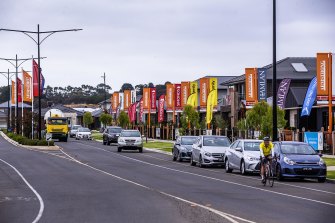 Today, Geelong is a boom town once again, with a surging population, a revitalised CBD and a sunny outlook across the pretty bay it once turned its back on.

As The Age has reported, while the “Geechange” was already a phenomenon before COVID-19, the pandemic and the emergence of remote and flexible working arrangements has accelerated the influx.

In 2021, greater Geelong accounted for 4 per cent of all migrations from capital cities nationally – the third most popular after the Gold Coast and the Sunshine Coast.

It’s not hard to see the appeal: a mix of (relatively) affordable period homes and new builds in an increasingly cosmopolitan city just an hour’s commute from Melbourne (for those two or three days in the office, if ever); and within striking distance of the Surf Coast for weekends. Count us in.

Increasingly, Geelong is losing its reliance on Melbourne, thanks to the arrival of major white-collar employers including the Transport Accident Commission, the National Disability Insurance Agency and WorkSafe Victoria, which have not only created jobs locally but also brought with them thousands of employees who have chosen to relocate rather than commute.

This influx has supercharged the local economy, which now has a flourishing dining and cultural scene that would have been alien to earlier generations, not to mention the proliferating luxury apartment towers and a waterfront that has been transformed from industrial relic to seaside playground.

There are similar, albeit slightly less dramatic, stories in Ballarat, Bendigo, the Surf Coast and other regional hotspots, where the sea change/tree change trend has been spurred by the pandemic.

No doubt the trend will be welcomed by both federal and state governments, which have for decades tried to reverse the regional population drain.

What this means for the people who already live in such areas, though, is a mixed bag; it is almost a case of being careful what you wish for.

While growing populations have brought with them a Melbourne-style cafe lifestyle, increasingly they have also brought Melbourne-style house prices. That may be fine for locals who own their homes, but it presents a barrier for would-be homebuyers. Greater Bendigo, greater Geelong and Ballarat all recorded median house price increases above 20 per cent in the year to December 2021.

Victorian Council of Social Service chief executive Emma King says demand for property in regional Victoria means traditionally affordable locations are no longer accessible to many lifelong residents, and there are pressures on health and support services.

The challenge for regional and state governments is to ameliorate the growing pains booming areas experience, among them increased inequity, insufficient infrastructure such as schools and public transport, urban sprawl in new developments, and traffic congestion.

As Geelong mayor Trent Sullivan puts it, “We are growing, but if we lose what makes us unique, that benefits no one.”

Gay Alcorn sends an exclusive newsletter to subscribers each week. Sign up to receive her Note from the Editor.

Morton Williams cracks down on Ben & Jerry’s over Israel controversy

What credit score do you need to get a student loan?