I was reading yet more about the troubles besetting the rich economies when it struck me: we’d do a lot better if our politicians and their advisers just managed the economy in ways that gave first priority to benefiting the ordinary people who constitute it.

The bleeding obvious, you say? Well, of late, not so you’d notice. Just what we’ve always been doing, the pollies and economists say? Again, not so you’d notice. Too simple? Not if you do it right.
Economics is the study of “the daily business of life” – going to work to earn money, then spending that money. If so, the economy is nothing more than all those who work (paid or unpaid) and consume, which is all of us. 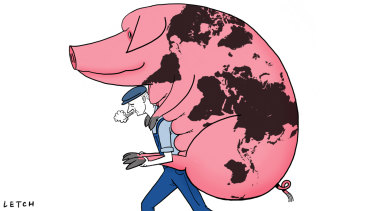 The fact that we are the economy means it’s actually our economy. So all the other players – politicians, economists, even business people – are there to serve our interests. Rather than becoming alienated from the process, we should be holding them to account.

During the past 30 or 40 years of what it’s now fashionable to call neo-liberalism, we were acting on the theory that the best way to benefit all Australians was to reduce the role of government in the daily business of life and give freer rein to businesses.

This indirect approach didn’t work well. We gave our bankers and business people greater freedom from government regulation, but they abused our trust. The lenience of regulators has seen business become remarkably lawless. Too much of the extra income the economy has generated has gone to the very highest income-earners, leaving too little going to middle and lower income-earners.

This era of “economic rationalism” and “microeconomic reform” has ended, leaving Scott Morrison with much damage to clean up. Meanwhile, many voters are disillusioned and distrustful of both main parties, and are turning elsewhere to populists such as Pauline Hanson, who not only have no answers to the problems that bother us, but also seek our support by blaming our troubles on unpopular scapegoats – Muslims, city-slickers etc.

The economic rationalists’ solution to misbehaving businesses, caveat emptor – let the buyer beware – is good advice but, in the modern complex world, it’s impractical. There aren’t enough leisure hours in the day for us to spend most of them checking that all the businesses we deal with aren’t overcharging us or taking advantage of us in some way, and our employer isn’t underpaying us.

So why don’t governments cut to the chase and simply make treating us in such ways illegal? And when doing so is already illegal – as it usually is – why don’t they resume adequately policing those laws?

Something almost everyone craves in their lives, but politicians and economists long ago lost sight of, is a high degree of security. We want the security of owning our own homes and we want security in our employment.

Some degree of flexibility in the job market is a good thing provided it works both ways. Under economic rationalism, the goal was more flexibility for employers without any concern about what this did to the lives of casual workers mucked about by selfish and capricious employers.
It’s good that part-time jobs are now available for those who want one – students, parents of young children, the semi-retired – but we could do more to make part-time jobs permanent rather than casual.

Many young people worry that we’re moving to a “gig economy” in which most jobs are non-jobs: short-lived, for only a few hours a week and badly paid, with few if any benefits.

I don’t believe we are moving to such a dystopia, mainly because I doubt it would suit most employers’ interests to treat most of their employees so shabbily. But, in any case, the way to avoid such a world is obvious: governments should make it illegal to employ people on such an unacceptable basis.

And governments will do that as soon as it’s the case that not to do so would cost them too many votes. That is, we have to make democracy work for the masses, not just the rich and powerful.
Of course, the security many of us would like is to live in a world where nothing changes. Sorry, not possible. Economies, and the mix of industries within them, have always changed and always will – often for reasons that, though they disrupt the lives of some people, end up making most of us better off.

New technologies are a major source of disruptive, but usually beneficial, change. Another source of disruptive change is the realisation that certain activities are bad for our health (smoking, for instance) or for the natural environment (excessive irrigation and land clearing, burning fossil fuels) and must be curtailed.

Coronavirus lockdown in California forces business to flee the state