Sometimes I think the smartest thing a nation can do to improve its economic fortunes is elect a leader who’s lucky. The miracle-working Scott Morrison, for instance.

This may be a controversial idea in these days of heightened political tribalism, when one tribe is tempted to hope the other tribe really stuffs up the economy and so gets thrown out. What does a wrecked economy matter if your tribe’s back in power? 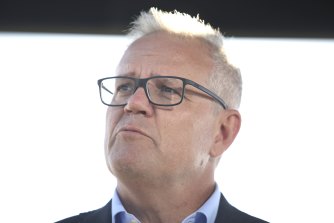 Morrison was not only lucky to win the 2019 election, there’s been as much luck as good management in his success in suppressing the virus and the way the economy’s bounced back from the coronacession. (Of course, it may be blasphemous of me to attribute his success to luck if, in truth, he’s getting preferential treatment from above.)

Anyway, it’s “providential” – as my sainted mother preferred to say – that the politics and the economics are almost perfectly aligned for Treasurer Josh Frydenberg’s budget next week.

Politically, Morrison must make an adequate response to the royal commission’s expensive proposals for fixing our aged care disaster. And must make recompense for last October’s all-macho budget by making the economic security of women a preoccupation of this one.

Economically, he must lock in the stimulus-driven rebound from the recession by “continuing to prioritise job creation” and driving the rate of unemployment down towards 4.5 per cent or less.

What’s providential is that both aged care and childcare are “industries” largely reliant on federal government funding and regulation, as well as having predominantly female customers and employing huge numbers of women.

The Australia Institute’s Matt Grudnoff has calculated that, if the government were to spend about $3 billion in each of five industries, this would directly create 22,000 additional jobs in universities, 23,000 jobs in the creative arts, 27,000 jobs in healthcare, 38,000 in aged care and 52,000 in childcare.

If ever there was an issue of particular importance to women, it’s aged care. Women outnumber men two to one among those in aged care institutions. Daughters take more responsibility than sons for the wellbeing of their elderly parents. And those working in aged care are mainly women.

The royal commission concluded the government needed to spend a further $10 billion a year to rectify aged care’s serious faults, though the money would need to be accompanied by much tighter regulation, to ensure most of it didn’t end up in the coffers of for-profit providers and big charities syphoning off taxpayers’ funds for other purposes.

With that proviso, most of the new money would end up in the hands of a bigger, better-qualified and better-paid female workforce. The Grattan Institute’s Dr Stephen Duckett estimates that at least 70,000 more jobs would be created.

If you ask the women’s movement – and female economists – to nominate a single measure that would do most to improve the economic welfare of women they nominate the prohibitive cost of childcare.

They’re right. And right to argue the issue is as much about improving the efficiency of our economy as about giving women a fair deal.

Going back even before the days when most girls left school at year 9 and women gave up their jobs when they married, the institutions of our labour market were designed to accommodate the needs of men, not women.

These days, girls are better educated than boys, but we still have a long way to go to renovate our arrangements to give women equal opportunity to exploit their training in the paid workforce – to the benefit of both themselves and their families, and the rest of us.

Wasting the talent of half the population ain’t smart. The key is to eliminate the disadvantage suffered by the sex that does the child-bearing and (still) most of the child-minding. And the key to that is to transfer the cost of childcare from the family to the whole community via the government’s budget.

This government is sticking to the legislated third stage of its tax cuts which, from July 2024, and at a cost of about $17 billion a year, will deliver huge savings to high income-earners, most of whom are old and male (like me).

We’re assured – mainly by rich old men – that this tax relief will do wonders to induce them to work harder and longer. But, as the tax economist Professor Patricia Apps has been arguing for decades, there’s little empirical evidence to support this oft-repeated claim.

Rather, the evidence says that the people whose willingness to work is most affected by tax rates and means-tested benefits are “secondary workers” – most whom are married women.

There is much evidence that it’s the high cost of childcare that does most to discourage the mothers of young children from returning to paid work, or from progressing from part-time to full-time work.

If the huge cost of the looming tax cuts helps discourage Morrison from spending as much as he should to fix aged care and the work-discouraging cost of childcare, we’ll know his conversion to Male Champion of Change has some way to go.

Latest Posts
'QAnon Shaman' lawyer makes offensive comments about Capitol rioters: 'They're all f—ing short-bus people'
Use Google services? These five updates will make your lives easier
anti infective medicines
Biden pitches $174B electric vehicle plan as he warns US losing race with China
Israeli airstrikes kill 11 children who were enrolled in a program to address past trauma from war
Recent Posts