Using three decades of house price data between 1990 and 2019, the research found housing prices in more expensive areas are more sensitive to changes in interest rates than in cheaper areas. 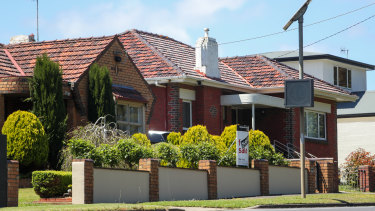 The research, released by the central bank on Monday, said housing prices are more sensitive to monetary policy in regions with higher shares of housing investors and higher levels of income, because they are more easily able to borrow when interest rates are low.

"This suggests that lower interest rates increase housing wealth inequality, while higher rates do the opposite," the research said.

Researchers Calvin He and Gianni La Cava said looking within states, the more expensive areas of NSW and Victoria saw much larger increases in housing prices than cheaper areas during the recent upswing.

Areas with less land available and therefore a lower level of housing stock, for example popular coastal suburbs, are also likely to be more susceptible to interest rate changes.

"We also find that the local housing markets with relatively high levels of mortgage debt are those in which local housing prices are more sensitive to changes in monetary policy," the researchers found.

Looking at over three decades of data, the paper found a one per cent increase in the cash rate will see the median house price fall up to 2.3 per cent after two years. At the 75th percentile, house prices fall up to 3.5 per cent.

"The differential effects of monetary policy changes on housing prices appear to be temporary," the researchers said. "The differences across all price deciles becomes statistically insignificant beyond two years."

Last week, Dr Lowe said there were risks to a prolonged period of low interest rates as home-owners take on higher mortgages.

"It's quite likely we're going to be in this world of low interest rates for years, perhaps decades, because it's driven by structural factors in the global economy," he said.

"Perhaps we're moving to a cross-over point where the lower level of interest rates are encouraging people to borrow yet even more which could create a vulnerability down the track."

The Reserve Bank will release the minutes of its first monetary policy meeting of the year on Tuesday.

Messages from employees prove the US Postal Service is in disarray

Coronavirus causes France to close Paris' Louvre, as disease spreads to over 60 countries

Keep your career going and don't do this