On a ferry from the town of Palau in northern Sardinia to the island of La Maddalena, famed for its white sand beaches and turquoise bays, the young woman behind the on-board bar is bored witless.

"We've got 80 per cent fewer tourists than normal. Look around – the boat is nearly empty," she says, scanning hopefully for a customer. A few hundreds of miles away, in Rome, it is a similar story. "Our takings are down by about 75 per cent compared with normal," says the woman in a bakery close to the Trevi Fountain.

From tourism to manufacturing and construction to food production, Italy's economy has suffered a catastrophic blow from the COVID-19 pandemic. First detected in late February, it has since killed more than 35,000 people and infected a quarter of a million. 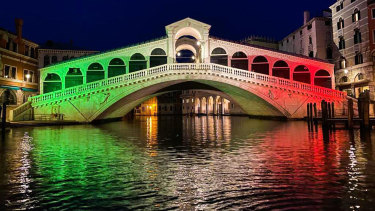 The Rialto Bridge in Venice is lit up in the colours of the Italian flag in honour of the medical workers on the COVID-19 frontlines. The city’s economy has been hit hard by the pandemic.Credit:AP

Italy's GDP dropped by 12.4 per cent between April and June, the second quarter of the year. The health emergency has wiped out about 30 years of growth.

"It has taken the country back to levels of GDP of the early Nineties," says Federico Santi, a Europe analyst with Eurasia Group.

The number of Italians who will lose their jobs as a result of the pandemic and the ensuing three-month lockdown, one of the strictest in the world, is not yet known. Amid warnings of social unrest, the government has extended until the end of the year a scheme under which companies receive financial help to keep on their employees.

A ban on firing people has also been extended until December but it will have to come to an end at some point, and depending on the strength of economic recovery, it may just delay the inevitable.

More than one third of Italian businesses now say they are at risk of closure, according to Istat, the national statistics agency, despite the government providing cheap loans, furlough schemes and emergency welfare support.

"The impact of the crisis on businesses was of an extraordinary intensity and rapidity, leading to serious risks to their survival," said the agency's Roberto Monducci in a recent presentation to parliament. Tourism is one of the most visible sectors to have been hit hard by COVID-19. Millions of tourists who would normally have headed for the beaches of Sicily or the canals of Venice have stayed away this summer, depriving the country of billions of euros in revenue.

International arrivals were down by 90 per cent by the end of July, according to the national tourism agency, Enit. Five of the most famous destinations – Rome, Venice, Florence, Turin and Milan – will lose €7.6 billion ($12.5 billion) in revenue this year as a result of the dearth of foreign visitors, said a report by business group Confesercenti.

There will be 34 million fewer tourist "presences" – or overnight stays – this year compared with normal years and thousands of businesses risk going bankrupt, it said.

Venice is the worst affected city and is predicted to lose more than 13 million overnight tourist stays this year, amounting to €3 billion in lost revenue.

"Tourism is paying a very high price for the emergency caused by COVID-19," says Patrizia De Luise, the president of Confesercenti. "It's a situation of exceptional gravity that requires extraordinary measures."

The collapse in the number of foreign visitors has been extraordinary.

If it goes on like this, we risk a catastrophe by October. We are expecting up to 26,000 shops to close. That is one in three. For the economy of Rome it will be a disaster.

"The hotels are empty. Only 200 out of 1200 have reopened and even some of those are closing down again, with some not opening until March next year," says Giuseppe Roscioli, president of the Rome branch of Federalberghi, a hoteliers' association.

The absence of tourists has had a devastating knock-on effect for many businesses. Since the end of lockdown, 3000 commercial activities in Rome have closed down, excluding bars and restaurants, according to Confesercenti. "That means thousands and thousands of families who no longer have an income," says Valter Giammaria, the head of the association's Rome chapter.

"If it goes on like this, we risk a catastrophe by October. We are expecting up to 26,000 shops to close. That is one in three. For the economy of Rome it will be a disaster."

The collapse in customers is not just because of the lack of foreign tourists; with millions of Italians still working at home, they are not travelling and spending as they normally do.

"We can't do much about the lack of foreign tourists – we won't see them come back en masse until there is a vaccine," says Giammaria.

"But an additional blow has been smart working. People are no longer going out to buy a pair of new shoes or a dress or go to the hairdressers."

The national lockdown and consequent decline in demand for goods and services has hit the whole economy, not just tourism. To take one example – farmers who produce mozzarella from herds of water buffalo in the south of Italy are in crisis. Demand for the creamy white balls of cheese is down by a quarter as a result of restaurants and hotels being closed during lockdown, according to the consortium that represents mozzarella producers. The contraction left farmers with around €35 million worth of unused milk and threatened the jobs of the sector's 30,000 employees. 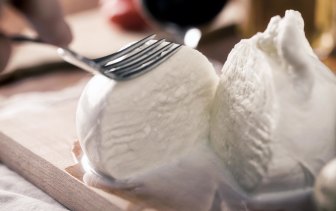 Demand for Mozzarella is down by a quarter as a result of restaurants and hotels being closed during lockdown.Credit:Shutterstock

Amid the gloom, there are glimmers of hope and tentative signs of a recovery. Some businesses are bouncing back. Industrial output increased by just over 8 per cent in June and there are expected to be more positive signs in the third quarter of the year.

Italy was given a massive boost in July when Brussels agreed on a €750 billion stimulus plan for the EU, 28 per cent of which is due to go to Rome. The €209 billion destined for Italy will not be disbursed until next year, but might just give the country enough breathing space as it anxiously waits for economic recovery to kick in.

"We should see signs of recovery in the third quarter," says Santi from Eurasia Group. "The most recent data were relatively encouraging in terms of retail sales and industrial output, although they were still low compared with pre-crisis levels.

"I would say there are optimistic signs. Business activity has picked up since the lifting of the lockdown."

Tourism is starting to rebuild. Millions of Italians flocked to beaches and mountain resorts this month and the first post-crisis cruise in the Mediterranean departed when the MSC Grandiosa left Genoa on a week-long tour of ports in Italy and Malta.

"The tourists are returning," says Andrea Rotondo, the president of the Rome branch of business body Confartigianato. They are a "breath of oxygen" for the city's hotel and restaurant owners, he adds.

But a halting recovery could be wiped out again if there is a brutal second wave of COVID-19.

Already, the signs are worrying – in mid-August, daily cases topped more than 600 for the first time since May. They have since doubled to more than 1200 on Sunday. On Saturday, there was a similarly alarming number – 1071 cases. The total number of deaths from coronavirus in Italy is over 35,400.

With fears that summer nightlife at the beach is fuelling a return of the virus, the government ordered nightclubs across the country to close.

Ministers and health experts have warned they will not hesitate to impose new lockdowns if there are significant outbreaks of the virus in the autumn and winter, and that would imperil the country's hesitant recovery.

"We still have a manageable situation. But it is precarious and the quantum leap can be very fast," says Agostino Miozzo, an expert who advises the government on the coronavirus emergency. Local lockdowns "may become inevitable if the situation gets out of hand".