A government can impose taxes and spend the proceeds on achieving some objective – say, helping the retired with their living expenses – or it can achieve the same objective by charging those people less tax than they’d otherwise pay. 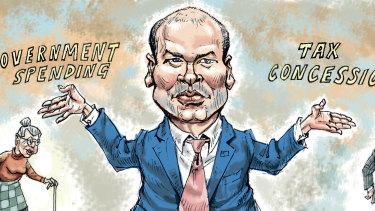 The only difference is that the two ways of assisting people appear on opposite sides of the budget. One adds to government spending while the other subtracts from government tax revenue. But, reason economists, this is a distinction without a difference. In principle, it doesn’t really matter.

Which is why economists have long sought to highlight the lack of difference between the two ways of assisting particular people or businesses by referring to special tax concessions as “tax expenditures”.

But though there may be no difference between the two in principle, in practice there’s an important difference. Government spending – on the age pension, for instance – is highly visible. It’s “salient” as psychologists and behavioural economists say.

By contrast, tax concessions – such as those applying to income that’s saved in a superannuation scheme, for instance – are much harder to see.

The practical consequence of this big difference in visibility is that actual government spending is examined carefully each year by the bureaucrats and by the Expenditure Review Committee of Cabinet, whereas all the spending on tax concessions tends to be ignored until someone decides to play around with a few of them.

This relative lack of attention paid to our many tax breaks prompted Treasury many years ago to begin estimating the value of the most important of them and publishing an annual Tax Expenditures Statement.

In 2019, however, the statement’s name was changed to the snappier, more enticing and informative Tax Benchmarks and Variations Statement. What a page-turner.

When the latest statement, for 2021, was published a few weeks ago, Dr John Hawkins, of the University of Canberra – in an earlier life, a senior Treasury official – used an article on the universities’ The Conversation website to explain that the name change reflects the truth that the amount of tax the government forgoes by granting a certain tax concession isn’t necessarily the same as the amount of tax it would regain if it abolished the concession.

(Hawkins points to one exception to that rule: the exemption of fresh food from the goods and services tax favours the poor over the rich because fresh food accounts for a higher proportion of the spending of the poor.) 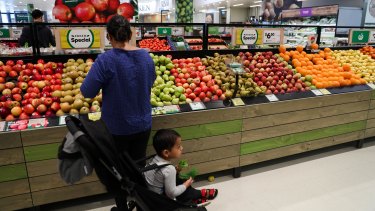 The exemption of fresh produce from the GST favours the poor.Credit:Edwina Pickles

Conversely, it suits you for the support you get from the government to come in the form of tax concessions and thus be hidden from the public’s and the politicians’ view.

Last financial year, the top 10 tax expenditures totalled just under $120 billion, which compares with total actual tax collections by the federal government of $460 billion. This year, 2021-22, the cost’s expected to be $150 billion. That increase of almost a quarter is explained mainly by the boom in house prices and share prices.

While tax expenditures primarily benefit the individual taxpayers who receive them, there’s a flow-on benefit to the industries conducting the economic activity that’s getting favourable tax treatment.

One stand-out is the property industry – developers, builders and real estate agents – which sees itself as benefiting from negative gearing and the 50 per cent discount on capital gains tax.

Another stand-out is the superannuation industry. It’s selling a product that’s heavily subsidised by the government – apart from the small fact that the government compels employers to buy its product on behalf of their employees.

A final “benefit” from the near invisibility of tax expenditures is that it allows recipients to delude themselves – and others – that they’re not dependent on government handouts.

Once, when I wrote that the Institute of Public Affairs think tank had its snout in the government trough, I got an indignant denial from its boss. When I replied that it benefited mightily from having donations to it declared tax-deductible, I heard no more.

Ross Gittins is the economics editor

Bernie Sanders: It’s ‘unfair’ to say ‘everything is bad’ in Fidel Castro’s Cuba