The coronavirus pandemic will cause a global recession in 2020 that could be worse than the one triggered by the global financial crisis of 2008-2009, but world economic output should recover in 2021, the International Monetary Fund said on Monday.

IMF Managing Director Kristalina Georgieva welcomed extraordinary fiscal actions already taken by many countries to boost health systems and protect affected companies and workers, and steps taken by central banks to ease monetary policy. "Even more will be needed, especially on the fiscal front," she said. 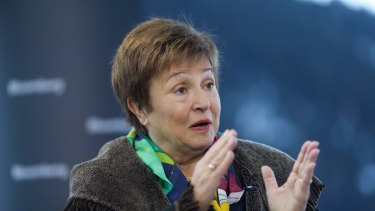 Georgieva issued the new outlook after a conference call of finance ministers and central bankers from the Group of 20 of the world's largest economies, who she said agreed on the need for solidarity across the globe.

"The human costs of the coronavirus pandemic are already immeasurable and all countries need to work together to protect people and limit the economic damage," Georgieva said.

More countries are imposing lockdown measures to contain the rapidly spreading virus, which has infected 337,500 people across the world and killed over 14,600.

Georgieva said the outlook for global growth was negative and the IMF now expected "a recession at least as bad as during the global financial crisis or worse."

Earlier this month, Georgieva had warned that 2020 world growth would be below the 2.9 per cent rate seen in 2019, but stopped short of predicting a recession. Trade wars pushed global growth last year to the lowest rate since a 0.7 per cent contraction in 2009.

On Monday Georgieva said a recovery was expected in 2021, but to reach it countries would need to prioritise containment and strengthen health systems.

"The economic impact is and will be severe, but the faster the virus stops, the quicker and stronger the recovery will be," she said.

Georgieva said the IMF would massively step up emergency finance, noting that 80 countries have already requested help and that the IMF stood ready to deploy all of its $US1 trillion in lending capacity.

Consumers start to wake up to COVID-19 threat to the economy, new survey shows

Big Pharma pushes back on Trump's drug pricing plan, Pfizer says it could cost US jobs

Is it better to pay off student loans or invest?