It is almost too good to believe. The days go by and there is still little evidence that the Omicron wave in South Africa is leading to a concomitant surge in severe illness.

Professor Francois Balloux, director of the UCL Genetics Institute, says we cannot rule out the “highly optimistic scenario” of a late-epidemic mutation that is extremely contagious, displaces Delta, but does less harm. 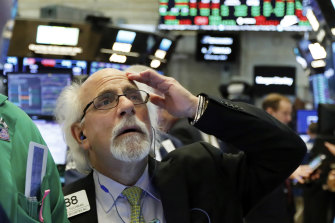 The Omicron news initially hammered markets but they have since steadied.Credit:AP

If we are “a bit lucky”, he says, the replication rate of the virus in host cells proves slower than the Delta variant, leading to less hospitalisation and death.

If we are “really lucky”, it also replicates preferentially in mucosa cells of the upper airways, rather than in organs such as the lungs and the kidneys where it does greatest damage. This would be the answer to our prayers.

Laymen cannot usefully judge the 30-odd mutations in the Omicron spike protein, but we can all see that asymptomatic infections are spreading like wildfire across the world, and can therefore draw the first, tentative, investible conclusions.

Goldman Sachs has gamed four Omicron outcomes: “severe downside”, “downside”, “false alarm”, and a surprise “upside”. These scenarios have starkly different implications for asset prices and macroeconomic policy over the next year. Get it wrong at your cost.

You can already see this tension playing out in wild moves on global bourses, or in oil prices, with each snippet of fresh information.

Markets have taken a fresh beating on warnings from Moderna that it is “not going to be good” for the existing vaccines. But if the disease is indeed milder, a slippage in antibody protection levels may not matter, and we still have T-cell memory as the next line of defence.

For the sake of argument – as a Gedankenexperiment – I assume that the benign picture from South Africa holds up over the winter and that we will land at the optimistic end of the Goldman spectrum.

The picture for markets is “bad” in the immediate sense that jumpy, snake-bitten governments will shutter parts of the economy as a precaution.

Cross-border travel is already paralysed. But I doubt it will last long and it is in any case a small fraction of global GDP. In other respects, business has learned to cope brilliantly with the pandemic.

It is “good” to the extent that it brings this ordeal to a rapid climax and pulls forward the day when we can dismantle the suffocating architecture of perma-testing, flight curbs, vaccine passports, forced isolation, and state intrusion in people’s lives.

Scientists will know in a couple of weeks whether Omicron has a lower case fatality rate than Delta.

They flag two obvious grounds for caution: viral infections tend to start with mild disease; and past waves show that young people tend to catch COVID first before it spreads up the age ladder.

The original cohort of patients breezing through surgeries in Johannesburg with little more than a headache may be a trick of the time sequence. 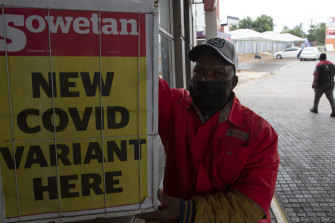 Scientists will know in a couple of weeks whether Omicron has a lower case fatality rate than Delta.Credit:AP

Should the benign scenario prevail, it will turbo-charge global economic growth and set off another leg of the commodity boom, probably pushing stock market indices to even frothier levels. You would not want to be in US Treasuries, gilts, or Bunds.

Remember that the Atlanta Fed’s instant tracker of US growth is running at 8.6 per cent for the fourth quarter, and the Fed is still adding its coup de whisky with $US105 billion ($148 billion) a month of quantitative easing.

China’s economy touched bottom last month after a recession (unacknowledged) and the regime had begun to crank up credit again just before Omicron hit.

Goldman Sachs thinks global inflation will fall faster in its ‘upside’ scenario because spending will shift from goods back to services, alleviating supply chain blockages.

This reflects the New Keynesian orthodoxy of central banks that shortages are causing the surge in prices. Heaven forfend that it should be the result of their own money creation.

Critics say the Fed conflates symptoms with cause, overlooking the deeper monetary roots of US inflation now running at a 30-year high of 6.2 per cent. I will happily take the other side of the Goldman trade, willing to bet that a faster global recovery would keep inflation bubbling and force central banks to tighten harder than they dare admit, or markets expect.

Note that Professor Raghuram Rajan, ex-governor of the Reserve Bank of India and now at Chicago University, has come close to accusing the Fed of losing the plot in a recent piece for Project Syndicate, warning that the institution has embarked on a structural inflation policy that is going to end badly.

My presumption is that the dam will break across the world rapidly if Omicron proves to be as mild as it looks and wins the transmission contest against Delta.

He said the Powell Fed is stuck in a psychological time-warp, still “fighting the last war” from the era of secular stagnation, and furthermore that it is a political hostage to a Congress on a fiscal rampage.

“In the past, the current levels of inflation would have prompted them to square their shoulders, look determinedly into the TV cameras, and say, ‘we hate inflation, and we will kill it’. But now they are more likely to make excuses,” he said.

The implication is that overheating in the world’s paramount economy – the anchor of dollarised international finance – is likely to be a bigger issue over the next year than anything COVID-19 throws at markets.

A benign Omicron outcome reshuffles the political debate and splits the world into different camps. Those countries such as the UK, the US, Mexico, Brazil, or India, inclined to ‘live with the virus’ will return to normal very fast.

At the other extreme, China is trapped by zero-COVID ideology and two years of state propaganda extolling the country’s superiority over the West for having successfully bottled up the virus. China has scant natural immunity and prefers not to put its semi-defective vaccines to public test. 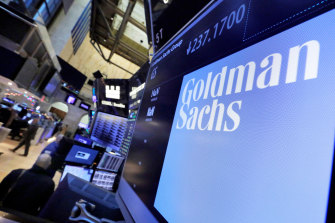 Goldman Sachs has outlined four scenarios for markets after the discovery of the Omicron variant. Credit:AP

The Chinese Centre for Disease Control and Prevention published a report this week warning that infections could top 630,000 a day if the country opens up. This document should be read as a statement that China aims to tough it out with zero tolerance.

But Xi Jinping cannot dodge the issue. He faces the invidious choice of hermetically sealed isolation for years, or accepting what the report called the “real possibility of a colossal outbreak which would almost certainly put intolerable stain on the medical system”.

“If we can cope with the Delta variant, we can also cope with Omicron,” says a breezy Zhang Wenhong, China’s COVID guru. Fine, but is zero-COVID a rational policy against a milder variant? Is it politically tenable at a time when Korea, Singapore, and others are switching to controlled endemic spread?

Europe is in a quandary. Delta is pushing hospital systems to the brink in Germany, Austria, Holland, and most of central Europe, with France catching up as its vaccine immunity wanes with a lag. Harsh measures are needed. Yet a milder Omicron variant would call for the opposite policy in quick succession.

Those states still pursuing suppression strategies to varying degrees may find it ever harder to justify coercive action, risking ‘gilets jaunes’ movements of spontaneous dissent. It is arguable that Austria’s policy of forced vaccination – soon to be copied by a string of neighbours – is already a violation of the European Convention on Human Rights, as are discriminatory lockdowns for the unjabbed.

My presumption is that the dam will break across the world rapidly if Omicron proves to be as mild as it looks and wins the transmission contest against Delta. The urge for normality will overcome all else and health authoritarianism will progressively lose its legitimacy.

We’ll know by mid-December. Until then, expect whiplash from violent markets.

Tips for if you’re let go because of coronavirus