It’s probably always true that democracies take too long to accept the need to act decisively to avert foreseeable problems. We never do it well, but always manage to muddle through. We wait until the problem’s reached crisis point. Everyone’s panicking, and thus willing to accept the tough remedies needed. But I fear climate change is too “wicked” a problem to be solved this usual way. 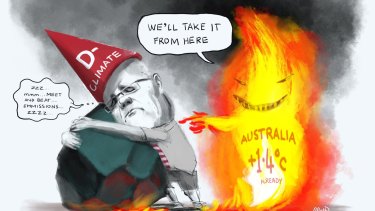 An extra problem for Australia is that we have a government rendered impotent by its internal divisions. The good news – of sorts – is that when the captain of the ship goes AWOL, the crew take over. The premiers – Liberal and Labor – are stepping in to fill the gap. And business can see the writing on the wall and is taking evasive action.

It’s obvious the world is moving to renewable energy and, before long, oil, gas and coal will become “stranded assets” selling a product for which demand can only decline. Here and overseas, banks are worrying about the security of their loans to fossil-fuel businesses, pension funds and investment managers are worrying about their members’ distaste for investing in polluting businesses, and energy businesses such as AGL and now BHP are dividing themselves into good bank and bad bank, so to speak.

Much of the wake-up call to finance and business is coming from financial regulators. Our Australian Prudential Regulatory Authority (APRA) has initiated a climate vulnerability assessment for banks, encompassing scenarios up to 3 degrees of average global warming, and has issued draft guidance for companies to stress test their own finances against scenarios of up to 4 degrees warming.

But in the report, Degrees of Risk, released this week by the Breakthrough – National Centre for Climate Restoration, and written by David Spratt and Ian Dunlop, the authors warn that if by these actions the climate-risk regulators imply warming of 3 to 4 degrees is manageable, or could be adapted to, APRA risks doing more harm than good.

Why? Because with warming of that extent, it’s doubtful we’d still have any banks. The authors say scientists consider 4 degrees of warming to be an existential threat, incompatible with the maintenance of human civilisation. And 3 degrees would be catastrophic, perhaps leading to outright chaos in the relations between nations.

If warming was anything like that bad, applying “stress tests” and doing “scenario planning” would be largely irrelevant.

The authors quote one professor saying that a 4-degree future is “incompatible with an organised global community, is likely to be beyond ‘adaptation’, is devastating to the majority of ecosystems and has a high probability of not being stable”.

Another prof says “it’s difficult to see how we could accommodate 8 billion people or maybe even half that . . . it will be a turbulent, conflict-ridden world”. 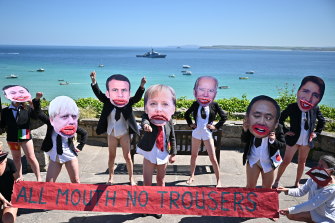 Among other impacts, the authors say, 4 degrees would in the long run melt both polar ice caps, with a sea-level rise of about 70 metres. Even 3 degrees would be catastrophic and make some nations, and regions, unliveable.

The authors say that Western Sydney has already reached heatwaves of 48 degrees. Add 12 degrees to that and you get summer heatwaves of 60 degrees. Phew.

Now, remember that psychologists and communications experts have been warning climate change campaigners that, if they make their message too frightening, the reaction of many people won’t be to rush out and join Extinction Rebellion, but to close their ears and do nothing.

Remember, too, that the modelling and projections of the climate scientists are far from certain sure and, as with the virus modelling of the epidemiologists, are based on assumptions that keep changing as our understanding of the phenomenon improves.

For these reasons, the UN’s Intergovernmental Panel on Climate Change has long erred on the side of understatement. But the risk with all this is that sensible people with the best intentions – such as regulators of the financial system – don’t realise how bad things could get.

The authors of Degrees of Risk say the science of climate change is inherently complex because it describes the dynamics of a multi-dimensional, “non-linear” system, involving many sub-systems and networks of adverse “cascade effects”.

‘In a period of rapid warming, most major tipping points, once crossed, are irreversible on human time frames.’

“Some responses to increasing levels of greenhouse gases are relatively linear and able to be projected well by climate models” but other responses are “non-linear, characterised by sudden changes, rather than smooth progress, which take the system from one discrete state to another, possibly with system cascades” where one change touches off a chain of changes.

“Factors contributing to this non-linearity include the existence of tipping points – polar ice sheets [melting], for example – where a threshold exists beyond which large, system-level change will be initiated, and positive feedbacks [that is, self-reinforcing loops] drive further change.

“In a period of rapid warming, most major tipping points, once crossed, are irreversible on human time frames”.

The authors’ message to regulators of the financial system is that the risk to banks and businesses at degrees of warming of anything like 3 or 4 degrees are huge, but so uncertain as to be unmeasurable. We need to act on the precautionary principle of significantly reducing emissions now, so we never get to find out how bad it could be.

The more prosaic message I draw is that we mustn’t kid ourselves that climate change is just another problem with unpopular solutions that we’ll muddle through as we always do.

How coronavirus chaos is affecting payroll in China

U.S. Existing Home Sales Extend Pullback In May But Drop Less Than Expected