The coalition’s plan to allow first home buyers to tap up to $50,000 from their superannuation fund to add to their deposit is unlikely to help many people enter the property market.

With restrictions on the scheme and an expected limited uptake, it is neither likely to drive up property prices, nor would it impact retirement savings or income.

The plan appears to be window dressing before an election, rather than offering significant help to those who want to stop paying rent and buy their own home. 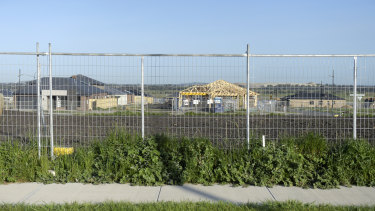 Allowing first home buyers to access their super may not assist many in any significant way, apart from a small of number of higher earners.Credit:Bloomberg

The Super Home Buyer Scheme has no cap on the incomes of the first home buyers, or the property price. However, there is a catch. Many potential first home buyers have little super, after accessing it when suffering financial hardship during the pandemic.

Under the early super access scheme, which ran from April to December 2020, super fund members who lost their jobs or had their hours reduced significantly could withdraw up to $20,000 from their retirement savings.

The Australian Institute of Superannuation Trustees says in its analysis of the impacts of the scheme that an estimated one million workers under the age of 35 had either closed their super accounts or had less than $1000 left in retirement savings.

‘Restrictions on the scheme are likely to result in a limited uptake, which means it is doubtful if it would drive up property prices.’

Under the Super Home Buyer Scheme, first home buyers must have already saved at least a 5 per cent deposit on a property’s purchase price before being allowed to dip into their super. Those who would be able to withdraw up to $50,000 would need a balance of $125,000, given the limit of 40 per cent of the total.

Restrictions on the scheme are likely to result in a limited uptake, which means it is doubtful if it would drive up property prices, particularly in Sydney and Melbourne, where prices are already beginning to fall as mortgage interest rates rise.

If the Morrison government is re-elected, the new scheme would not start until the middle of next year, and with official interest rates tipped to keep on rising, prices in our two largest cities are expected to continue their downward trajectory. Some economists are tipping peak to trough property price falls of up to 15 per cent.

Any move by young first home buyers to tap their super for housing is unlikely to significantly impact their retirement income either. That is because when the initial property is sold, the money that was withdrawn from super must be repaid, along with a “share” of any capital gains made on the sale price.

The first-time buyer would have less money from the sale to purchase their next property.

Still, home ownership remains a crucial determinant of standard of living in retirement. That is not only because homeowners do not have to pay rent, but the generous treatment of the family home for social security purposes: It is excluded from the assets test for the age pension.

Profits from the sale of a residence are also free of capital gains tax.

Overall, the Super Home Buyer Scheme appears to be more of an election pitch, rather than offering much help to those looking to get a foot on the property ladder.

By contrast, the expanded number of places for schemes that allow first homebuyers to get into the market with just a 5 per cent deposit – which has bipartisan support, and has income and purchase price caps – have been effective in getting people into their first homes.