There’s nothing new about pandemics. Over the centuries, they’ve killed millions upon millions. But economic historians are discovering they can also have benefits for those who live to tell the tale. Take the Black Death of the 14th century.

In October 1347, ships arrived in Messina, Sicily, carrying Genoese merchants coming from Kaffa in Crimea. They also carried a deadly new disease. Over the next five years, the Back Death spread across Europe and the Middle East, killing between 30 and 50 per cent of the population. 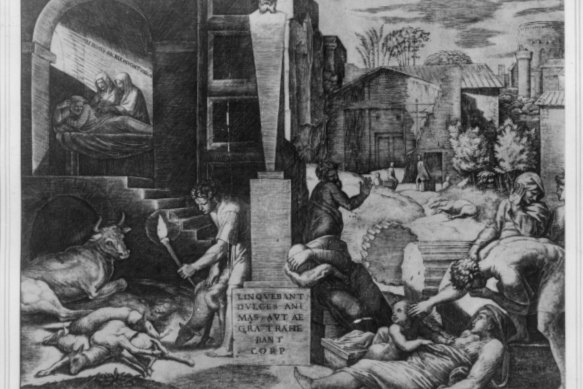 A line engraving by Marc Antonio Raimondi shows the suffering of a town in Europe during the bubonic plague outbreak in the Middle Ages. Natural interest rates remained lower than normal in the wake of the outbreak.

What happened after that is traced in a recent study, The Economic Impact of the Black Death, by three American academics, Remi Jedwab, Noel Johnson and Mark Koyama, and summarised by Timothy Taylor in his popular blog, the Conversable Economist.

The immediate consequences of all the deaths were severe disruptions of agriculture and trade between cities. There were shortages of goods and shortages of workers, so those who did survive had to be paid well. This will ring a bell: with shortages of supply but strong demand, inflation took off.

In England, the Statute of Labourers, passed in 1349, imposed caps on wages. It was highly effective during the 1350s, but less so after that. Similar restrictions were imposed elsewhere in Europe.

Over the next few decades, after economies had adjusted to the worst of the disruptions, the continuing shortage of workers resulted in many rural labourers moving to the cities, which had vacant houses as well as jobs. Farmers had to pay a lot to keep their workers, so real wages had grown substantially by the end of the century.

Since many noblemen had died, the distribution of income became less unequal. Ordinary people could afford better clothing. So, many countries passed “sumptuary” laws under which only the nobility were allowed to wear silk, gold buttons or certain colours. Nor could the punters serve two meat courses at dinner.

Sumptuary laws were an attempt by elites to repress status competition from below.

The authors say the economic effects of the Black Death interacted with changes in social and cultural institutions – accepted beliefs about how people should behave. Serfdom went into decline in Western Europe because of the fewer labourers available.

People became even more inclined to marry later and so have fewer children. Stronger, more cohesive states emerged and the political power of the church was weakened.

It’s widely believed that all these developments played a role in the economic rise of Europe, particularly north-western Europe.

Taylor notes that one of the great puzzles of world economic history is the Great Divergence – the way the economies of Europe began to grow significantly faster than the economies of Asia and the Middle East, which had previously been the world leaders.

This divergence began soon after the Black Death.

“Of course, many factors were at work. But ironically, one contributor seems to have been the disruptions in economic, social and political patterns caused by the Black Death,” he concludes.

Fortunately, advances in medical science mean our pandemic has cost the lives of a much smaller proportion of the population. And believe it or not, advances in economic understanding mean governments have known what to do to limit the economic fallout – even if we didn’t see the inflation coming.

Governments knew to spare no taxpayer expense in funding drug companies to develop effective vaccines and medicines in record time.

One consequence of our greater understanding of what to do may be that this pandemic won’t alter the course of world economic history the way the Black Death did.

Even so, it’s still far too soon to be sure what the wider economic consequences will be. Changing China’s economic future is one possibility. Come back in 50 years and whoever’s doing my job will tell you.

Even at this early stage, however, it’s clear the pandemic has led to changes in our behaviour. Necessity’s been the mother of invention. Or rather, it’s obliged us to get on with exploiting benefits from the digital revolution we’d been hesitating over.

Who knew it was so easy and so attractive for people to work from home – with a fair bit of the saving in commuting time going into working longer. And these days many more of us know the convenience of shopping online – and the downside of sending back clothes that don’t fit.

Doctors were holding back on exploiting the benefits of telehealth, but no more. Prescriptions are now just another thing on your phone. And I doubt if the number of business flights between Sydney and Melbourne will ever recover.

Fascinating answers to perplexing questions delivered to your inbox every week. Sign up to get our Explainer newsletter here.

US, China pledge cooperation on trade agreement despite coronavirus spat

US rents surge, leaving behind generation of younger workers