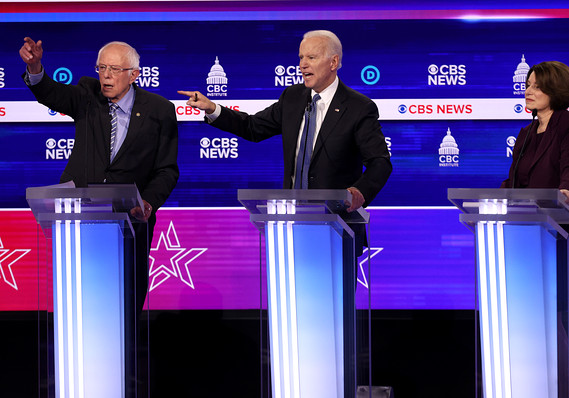 Joe Biden is getting positive reviews for his Tuesday-night debate performance in South Carolina, which analysts say buoys his prospects in the Democratic presidential primary even as Bernie Sanders retains pole position.

The debate, in which seven candidates including Biden and Sanders repeatedly talked over one another, came just four days before the pivotal South Carolina primary. Biden, once the national front-runner, is banking on winning South Carolina and giving his flagging campaign a boost before Super Tuesday on March 3.

Here’s a sampling of what analysts are saying about the debate, which featured candidates Mike Bloomberg, Pete Buttigieg, Amy Klobuchar, Elizabeth Warren and Tom Steyer in addition to Biden and Sanders.

• “Joe Biden still has a pulse rate; he was animated and reasonably articulate. Bernie Sanders is still the favorite, but he took some major body blows and we still think Biden has a narrow opening. No one else does; Mike Bloomberg went from terrible last week to mediocre last night.” — Greg Valliere, chief U.S. policy strategist, AGF Investments.

Now read: Is fear of a Sanders presidency bern-ing markets?

• “As the South Carolina front-runner according to the latest polls, Joe Biden emerged relatively unscathed from the debate. Most of the fire was trained on Bernie Sanders and Michael Bloomberg, definitely to Biden’s benefit. South Carolina is a must-win for the former vice president.” — Melissa Miller, associate professor, department of political science, Bowling Green State University.

• “Biden did have a good debate and the best chance of someone taking on Sanders is with a decisive South Carolina win by Biden that he can parlay into a relatively strong Super Tuesday. That outcome, though, is far from certain, as the race in South Carolina has narrowed considerably over the past couple of weeks.” — analysts at Beacon Policy Advisors.

• “Despite some assumptions of the inevitability of Sen. Bernie Sanders winning the Democratic presidential nomination, there is still a clear path for Democrats to nominate someone else. We note that it was not that long-ago observers were calling Vice President Biden’s rise inevitable…The window, however, will close quickly after Super Tuesday.” — Height Capital Markets analysts in a note.