Despite a healthy March-May quarter (Q3FY22) show by global IT consulting firm Accenture, Indian IT companies shed up to 3 per cent on the National Stock Exchange (NSE) on Friday as analysts continued to highlight medium-term pain points for the sector. 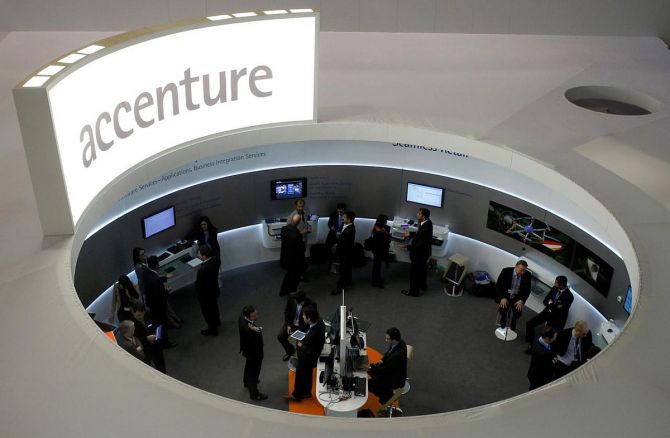 The Nifty IT index settled 0.9 per cent lower on Friday, as against a 0.9 per cent rise in the Nifty50 index.

According to analysts at ICICI Securities, Accenture’s Q3 saw moderation in year-on-year growth rate across verticals and US regions, which signals at likely normalisation in revenue momentum for Indian IT services going forward.

The brokerage remains ‘underweight’ on the Indian IT services as the risks might further degrade valuations.

Dublin-based Accenture clocked a revenue of $16.16 billion in Q3, an increase of 22 per cent over $13.26-billion revenue reported a year earlier.

In constant currency (CC) terms, the growth was 27 per cent, and well above the guidance range.

Revenue growth was largely boosted by Communications, Media and Technology (CMT) and products verticals (growth of 31 per cent each); and consulting (30 per cent).

That apart, Jefferies pointed out that Accenture’s revised FY22 guidance of 25.5-26.5 per cent from 24-26 per cent YoY in CC terms implies a 3 per cent revenue decline at the lower end and flat revenues at the upper end in QoQ CC terms.

Accenture reported deal bookings of $17 billion, up 10 per cent YoY, but down 13 per cent QoQ.

“Accenture’s commentary suggests that the demand environment remains supportive, and the weakening macro environment has not yet started impacting growth in the sector.

Furthermore, its net hiring in Q3 reduced to 12,000 – the lowest in six quarters.

“Accenture’s pace of net headcount addition slowed down with net addition of 11,928 employees vs 40,000 average net addition per quarter in the last four quarters.

“Slowdown in headcount addition, decrease in book-to-bill ratio, and moderation in revenue growth all point towards normalisation of growth momentum ahead for the IT services industry,” said ICICI Securities.

We believe revenue momentum is likely to slow down in H2FY23 for Indian IT services as enterprises delay new projects amidst macro uncertainties, it added.

“Strong outlook and robust bookings for Accenture reflect the secular nature of demand for IT services in the near-term, though medium-term risks persist,” said IIFL Securities.

Emkay Global, too, concurred that robust demand and steady decision-making alleviate near-term growth concerns for Indian IT; however, elevated attrition and volatility in foreign exchange pose challenges to earnings.

AI IN BANKING: How forward-looking banks are using maturing AI solutions to design both customer- and employee-facing innovations

Most Iconic Musical Duos of All Time

Coping With COVID-19 Crisis: ‘Caroline, Or Change’ Composer Jeanine Tesori Contemplates The Hope In Plans, The Lessons Of Plagues And How We Serve Now