It’s the first step in the Air Force’s plan to divest 17 of the bombers in coming months, reducing the active B-1 fleet to 45 aircraft.

“Beginning to retire legacy bombers, to make way for the B-21 Raider, is something we have been working toward for some time,” said Gen. Tim Ray, Air Force Global Strike Command commander, in a news release.

“Due to the wear and tear placed on the B-1 fleet over the past two decades, maintaining these bombers would cost tens of millions of dollars per aircraft to get back to status quo, and that’s just to fix the problems we know about. We’re just accelerating planned retirements,” Ray said in the release.

In the fiscal 2021 budget request, the Air Force proposed retiring 17 B-1B bombers from its 62-aircraft fleet in order to better sustain the most functional planes. Officials on Wednesday said a small number of the sweep-wing bombers are in a state that would require “approximately ten to 30 million dollars per aircraft to get back to a status quo,” according to the release.

The service plans to retire the entire fleet by 2036. 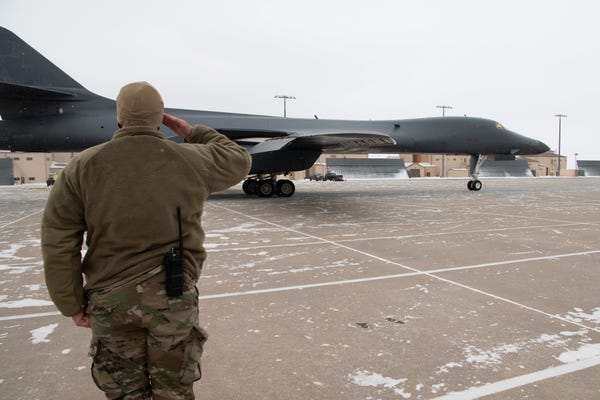 Lawmakers allowed the service to go ahead with retirements, but said officials must provide a new bomber roadmap strategy detailing how its current “bomber aircraft force structure … enables the Air Force to meet the requirements of its long-range strike mission under the National Defense Strategy,” according to the FY 2021 National Defense Authorization Act. The strategy is due this month.

The law mandates that the bombers kept at the boneyard will be preserved well enough for their parts to be used for other bombers.

The Air Force spokesperson said that while final details are still being evaluated, 14 bombers will head to Davis-Monthan’s aircraft boneyard by the end of September.

Plans for the remaining three are still up in the air, but the bombers will likely be sent to Edwards Air Force Base, California for test purposes, or to Tinker Air Force Base in Oklahoma for depot management and structural evaluation, the spokesperson said.

In 2012, the Air Force began the Integrated Battle Station, or IBS, modification for the B-1 — likely the largest and most complicated modification the bomber will see. The enhanced navigation and communication system upgrade — completed in September 2020 — cost the service roughly $1.1 billion, officials said.

Still, due to heavy use in the Middle East over a decade as the only US supersonic heavy-payload bomber, the Lancer fleet has seen repeated breakdowns and required extensive maintenance.

The repeated deployments caused the aircraft to deteriorate more quickly than expected, Ray said in 2019.

Ridding the fleet of these 17 bombers “will not affect the service’s lethality or any associated maintenance manpower,” officials said.

“Retiring aircraft with the least amount of usable life allows us to prioritize the health of the fleet and crew training,” Ray said, adding that fewer aircraft gives maintainers the ability to devote more time and attention to the remaining fleet.

The B-1 is capable of carrying both precision-guided and conventional bombs; plans are underway to make it more versatile for future operations.

In August 2019, the Air Force proved it could transform the Lancer to hold more ordnance, a first step toward carrying hypersonic weapons payloads.

B-1s have also been busy conducting flights around the world.

Over the last few months, the bombers have been spotted conducting multiple high-visibility patrols — known as a dynamic force employment — in the Indo-Pacific region, most notably across the East and South China Seas.

Last May, bombers from Ellsworth held their first-ever training mission over Sweden near the Arctic; B-1s will deploy to Norway in coming days for similar training, the Air Force said this month.

‘Hope’ the Giraffe Born in New Orleans Amid Pandemic