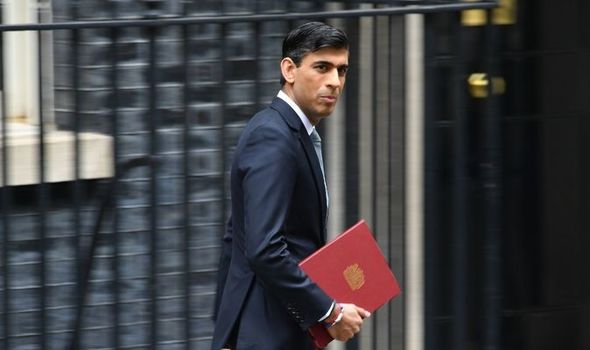 Official figures show the Government borrowed £303.1billion in the 2020/21 financial year, as the Chancellor flexed the public purse to help weather the effects of the pandemic. This equates to 14.5 percent of gross domestic product (GDP), with the Office for National Statistics (ONS) saying it marked the highest annual total since 1946 – when comparable records began. As Britain emerged from the end of the war, the deficit hit 15.2 percent of GDP.

The level of borrowing came well under the £335billion predicted by the Office for Budget Responsibility (OBR) last month.

Since the first lockdown, Rishi Sunak has sought to inject vast sums of money into the economy to help prevent mass bankruptcies and unemployment.

His job retention scheme has proved widely popular, and allowed firms to furlough staff while the Government paid 80 percent of wages up to £2,500 per month.

The furlough scheme was first announced in March 2020, when the Chancellor unveiled a series of financial measures to help companies and employees affected by the national lockdown.

Due to the introduction of a second and third national lockdown, the furlough scheme has been extended until the end of April 2021.

JPMorgan CEO Jamie Dimon: People with these traits succeed–'not the smartest or hardest-working in the room'