Deutsche Bank's chief equity strategist is expecting a "significant pullback" of up to 10% in the S&P 500 over the next three months.

In a Monday note a team of strategists led by Binky Chadha said they expect stocks to grind higher in the "very near term," supported by earnings upgrades and a growth acceleration. The S&P 500 and Dow Jones Industrial Average hit record highs on Monday as a strong jobs report propelled economic optimism.

Chadha explained that stocks have historically traded closely with indicators of cyclical macro growth like the ISM manufacturing index. Macro growth typically peaks around a year after a recession ends, and the US appears to be at that point now. Historically when the ISM flattens or peaks and then begins to fall, the S&P 500 has sold off.

"With a strong correlation between equity performance and cyclical growth indicators, it follows that a decline in the ISM from its peak should see equities sell off; and the bigger the decline, the larger the equity selloff should be," Chadha added.

Deutsche Bank's economists forecast that ISMs will flatten out beginning in the second quarter and continuing into the third quarter.

Chadha also said that overall equity positioning is already elevated-which is unusual for so early into an economic recovery-and that supports a bigger-than-average historical pullback of up to 10% in the next three months. 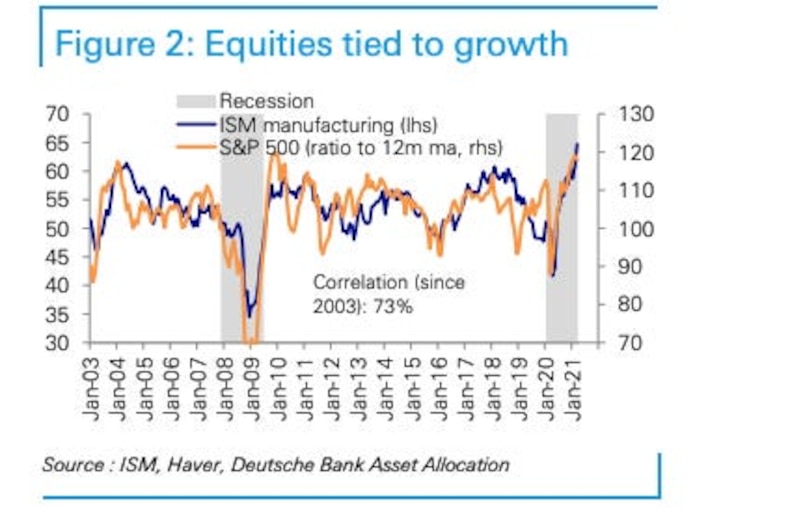 Sam Darnold on Jets exit: ‘My expectations were to go in there, play 20 years and win Super Bowls’