After unseasonal rains, supply disruptions and pandemic-induced woes pushed retail inflation well over the Reserve Bank’s comfort zone in 2020, the scenario is likely to stay that way at least in the short term as economic recovery slowly gains foothold. 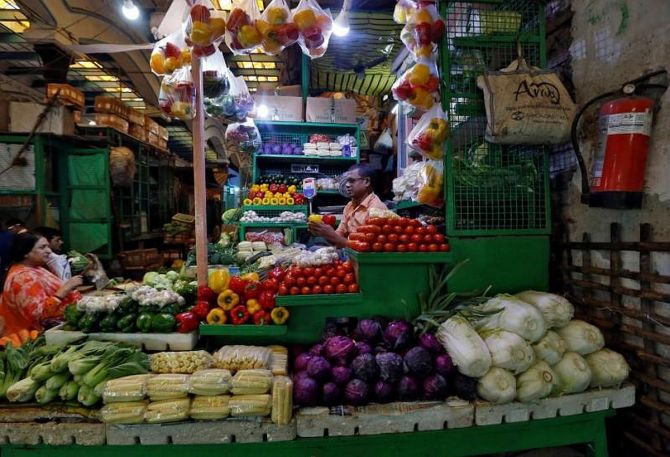 For most part of this year, pricier food items pushed the retail inflation, based on Consumer Price Index (CPI), higher in the range of 6.58-7.61 per cent, except for March when the reading was 5.91 per cent.

Experts believe retail inflation is likely to average around 6.3 per cent this fiscal and mostly will remain sticky going forward owing to pick-up in demand across sectors.

In indications of supply chain bottlenecks, wholesale price-based inflation was mostly benign this year, touching a low of (-) 3.37 per cent in May and a maximum of 3.1 per cent in January.

The economic recovery is witnessing early signs of revving up after being ravaged by the coronavirus pandemic and a historic nationwide lockdown for a few months that began in late March to curb COVID-19.

In a rare instance, no retail inflation data was published by the government in April and May as field visits by officials could not happen during the lockdown.

Consumers shelled out more to buy ‘Tomato, Onion and Potato’ or the TOP.

The trio is also the focus of the central government’s Operation Greens initiative announced two years ago to ensure their adequate supplies throughout the year without any price shocks.

TOP ruled as high as Rs 60-80 per kilogram (kg) at some or the other point of time during the year as unseasonal rains affected output and coronavirus-induced lockdown caused supply disruptions, among other factors.

Even as prices of cereals may soften due to bumper kharif crop arrivals and winter-season vegetables, other food prices are expected to remain elevated, according to the Reserve Bank of India (RBI).

The RBI expects retail inflation to be at around 5.8 per cent by the end of March 2021, and will further ease to 5.2-4.6 per by September next year, not a very uncomfortable position vis-a-vis its mandate of 4 per cent with a bias of 2 per cent on either side (+/-2 per cent).

At the policy review earlier this month, RBI Governor Shaktikanta Das said the Monetary Policy Committee (MPC) was of the view that inflation is likely to remain elevated, barring transient relief in winter months from prices of perishables.

“Our paramount objective is to support growth while ensuring that financial stability is maintained and preserved at all times,” Das said on December 4.

With demand now strengthening, the concern is that despite some easing of supply and logistical disruptions, inflation will not ease meaningfully in the near term, other than a base effect driven moderation, rating agency Icra’s principal economist Aditi Nayar said.

She noted that with demand strengthening and some households having greater visibility on their income outlook, inflation expectations are expected to remain high.

During the year, retail inflation was highest at 7.61 per cent in October, before softening down to 6.93 per cent in November.

The inflation print for December will be known in mid-January.

Meanwhile, the wholesale inflation print in November at 1.55 per cent was the highest in 9-months due to costlier manufactured items, even as food prices cooled, indicating improving economic activity. It was 1.48 per cent in October.

India Ratings and Research Principal Economist Sunil Kumar Sinha said, “We will see some moderation in retail inflation mainly due to the high base of 2020, but given the structural nature of inflation in some of the food items, focus on health care products in combination with elevated fuel prices, I expect the average retail inflation in 2021 to remain in the band of 4-5.5 per cent.”

As per Emkay Research, retail inflation may average around 6.3 per cent in the current fiscal.

“The healthy kharif arrivals, import duty cuts, favourable base effects and a bright outlook for the upcoming rabi season should aid in cooling food inflation.

“However, high global prices of oils and domestic supply-side issues for protein items as well as vegetables, may prevent a meaningful decline in the overall food inflation in the near term,” Aditi Nayar said.

According to her, improving sentiment related to early visibility of a COVID-19 vaccine is expected to push up the prices of various commodities including crude oil, which would seep into the non-food portion of retail and wholesale inflation.

“Inflation should further ease in FY22 helped by a favourable base effect, wide output gap and rebalancing of effective demand-supply dynamics.

“But despite sub-par growth backdrop and sub-optimal fiscal response, the above-target inflation will constrain the RBI from delivering further conventional rate cuts.

“That said, we do not see the RBI changing its accommodative stance and liquidity stance in the coming months,” Emkay said in a note.

“We expect the central bank to keep the repo rate on hold in the rest of FY21.

“We think any room for further policy easing (25bp) will be dependent on either growth surprising significantly on the downside and/or inflationary pressures moderating significantly over the coming months on lower food prices,” UBS Securities India Economist Tanvee Gupta Jain said.

Esports Ecosystem Report 2020: The key industry players and trends growing the esports market which is on track to surpass $1.5B by 2023