If you came of age as a basketball fan in the 1990s, it was impossible to be neutral about Mike Krzyzewski.

The program he built at Duke had become so big, so successful, so polarizing — and, yes, so annoying — that every time they took the court, it was cast as a battle of good vs. evil depending on which side you were on.

The complaints and conspiracy theories about the Blue Devils ran wild whether it was Krzyzewski intimidating the refs into giving them a friendly whistle or broadcasters like Dick Vitale supposedly rooting for them on the air. The Cameron Crazies were obnoxious, the flopping on defense was out of control and slapping the floor was an annoying gimmick.

Everything about Duke seemed like it dripped privilege and arrogance, all the way down to wriggling out of any responsibility for potential scandals like Corey Maggette playing while ineligible in 1999 or the still-mysterious case of Lance Thomas buying $100,000 worth of jewelry mostly on credit in the middle of the 2009-10 national championship season.

The more you hated Duke, the more it ate at you that year after year, decade after decade, nothing changed. No matter what else was happening in college basketball, which coaches were coming and going, which programs were rising and falling, Duke was always there. For three solid decades, it was the Blue Devils and everyone else.

When Krzyzewski walks off the floor at Cameron Indoor Arena one last time next March after a farewell tour in his 42nd season as Duke’s head coach, he will do so as the greatest college basketball coach of all time.

For many reasons, that will not be a unanimous view. John Wooden won more national titles, Roy Williams and Dean Smith won a higher percentage of their games and others like Rick Pitino and Tom Izzo are widely considered superior tacticians. Some critics could even argue that despite the five national titles Krzyzewski won, he probably should have had a few more. 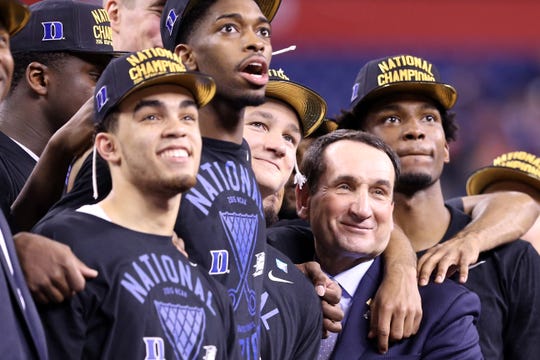 Economic meltdown: UK economy to shrink by 15 percent this quarter– biggest dip since 1997