(CNN Business)Approximately 200,000 shipping containers remain gridlocked off the coast of Los Angeles on Monday as pandemic-related disruptions continue to affect various supply chains, according to Gene Seroka, the executive director of the Port of Los Angeles.

“We have about two weeks’ worth of work sitting at anchor right now,” Seroka said in an interview with CNN’s Jake Tapper. “The question right now is how do we segment this cargo.” 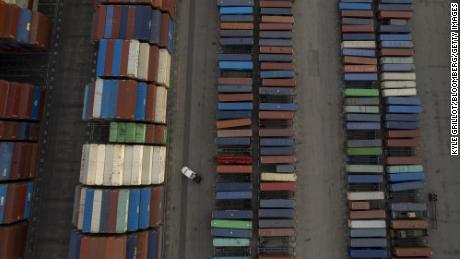 Easing the backlog is crucial during the final months of the year because retail items are in high demand as holiday shopping begins to kick off, Seroka said. Automotive parts are also being prioritized because US auto manufacturers and many suppliers through the Midwest are waiting on components so they can build their final products.

“We had 25% of all cargo on our dock sitting here for 13 days or longer [and] that’s been cut in just about half over the last week,” Seroka said.

Five days ago, President Biden announced the Port of Los Angeles would move to a 24/7 operating schedule. While this has alleviated some of the congestion at the ports, Seroka said officials are not expecting to see the import market strengthen until February 2022.

“We’ve been buying more than ever as American consumers and the retailers have really tried their best to keep up with demand,” Seroka said. “The second quarter of next year is going to be focused on replenishing this inventory.”

Around the world, ports are congested as a result of the rapid rebound in demand for commodities and goods as much of the global economy has recovered from the pandemic. Shipping costs have soared, and companies wanting to move goods around are struggling because there just aren’t enough ships or containers available. All the while prices are going up for consumers.
– Anneken Tappe contributed to this report
Source: Read Full Article