Has any Broadway production in recent (or even not so recent) memory arrived with as much emotional baggage – or carried it as lightly – as the visually and sonically ravishing MJ? The Michael Jackson musical, as unlikely as such a prospect might have seemed a year ago, now appears poised to take Manhattan with the same hurricane force that the real Jackson funneled when he moonwalked into television history on Motown 25.

If MJ can’t contain the shock of the new that turned his 1983 television performance into an era-defining moment, it is in no short supply of its own thrills, not least the reminder, after all these years of scandal and accusations, that we once observed, in real time, the blossoming of undeniable talent into unavoidable genius. That’s a transition, not since equaled, that director-choreographer Christopher Wheeldon, book write Lynn Nottage and an impeccable cast led by the star-is-born Myles Frost, bring to pulse-quickening life on the stage.

To address the elephant man in the room: While MJ depicts Jackson’s drug problems, raises (if only to dismiss) charges of racial self-loathing, references the Bubbles-and-Joseph Merrick eccentricities, the third-rail allegations of child molestation go unstated if not entirely ignored. The approach is, historically speaking, defendable: The events of MJ are set in 1992 as Jackson rehearses his upcoming Dangerous world tour. The setting places the musical a year before the public accusations and police investigations that would shadow Michael Jackson until his death in 2009, and his legacy to this moment.

Within the musical’s universe, the closest MJ comes to confronting the topic is a vague reference to a family being invited on tour with the singer, but even that comment is open to interpretation: Is the business associate raising the issue merely worried about the expense of additional people on tour, or is he fretting about putting a young boy in such close proximity to the star? Is the reference’s sense of foreboding rooted in concern for victims of child abuse, or for a victim of scheming blackmailers? MJ‘s unspoken response: Decide for yourself. 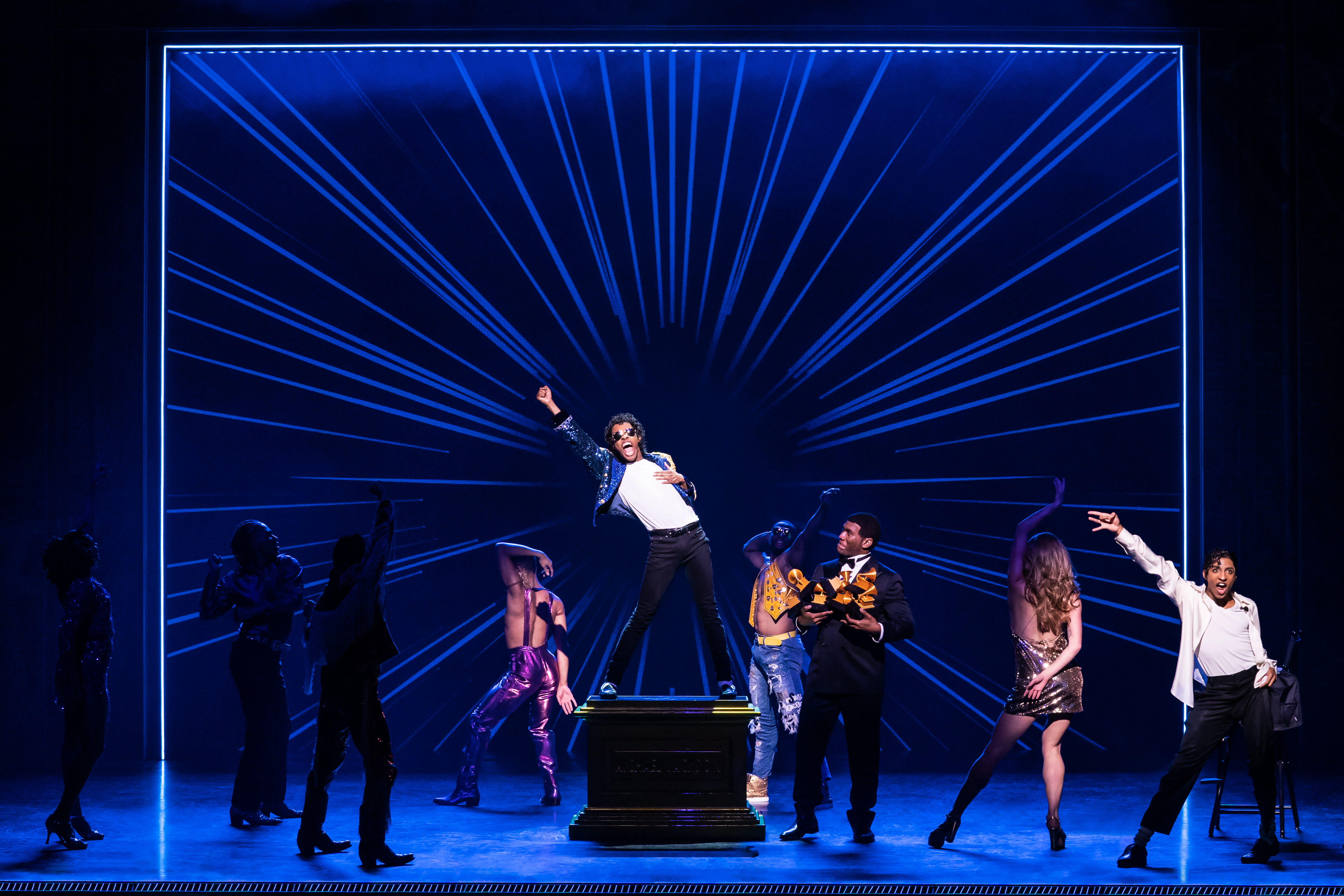 Clearly, audiences shelling out big bucks to attend MJ have decided in favor of the man on stage, a fact the musical’s book, written by the double-Pulitzer winner Lynn Nottage, slyly acknowledges with repeated references to the art-versus-artist debate, here most often given voice by the musical’s single most clunky device: Nottage creates an MTV producer and cameraman to film Jackson as he prepares and rehearsals for the much anticipated world tour. While promising the star and his protectors that MTV’s interests and intentions are solely about the music, the producer can’t resist poking around for signs of, well, anything, her interest piqued by overheard references to pill-popping, the pervasive atmosphere of tension, rumors of bleached skin and bobbed noses and chimpanzees and Elephant Man bones and hyperbaric oxygen chambers. Anyone within the gravitation pull of Michael Jackson needn’t look far for signs of the mind-boggling eccentricity that will, at least in the public mind, very quickly begin to overshadow a monumental talent.

We’re told (if we need reminding) that the stakes for Jackson couldn’t be higher: Nine years after his enormously successful, groundbreaking and career-defining Thriller album will be scrutinized by the press, the public and, not least, by Jackson himself for even the vaguest hint that the King of Pop can’t hold his crown forever. The Dangerous tour and album will either return Jackson to the cultural pinnacle or simply return him to the earthly realm inhabited by the Madonnas and Bowies and Springsteens of the world. As Jackson says so often if becomes a mantra, the Dangerous show must be perfect.

Watching MJ, one easily suspects its top-flight creative team was motivated by the same near-maniacal drive. Aside from the pedestrian framing device, MJ pushes hard and unceasingly to move beyond the just-good-enough nostalgia that can turn even second-rate jukebox productions into crowd pleasers. It succeeds: MJ is a wildly entertaining marvel. 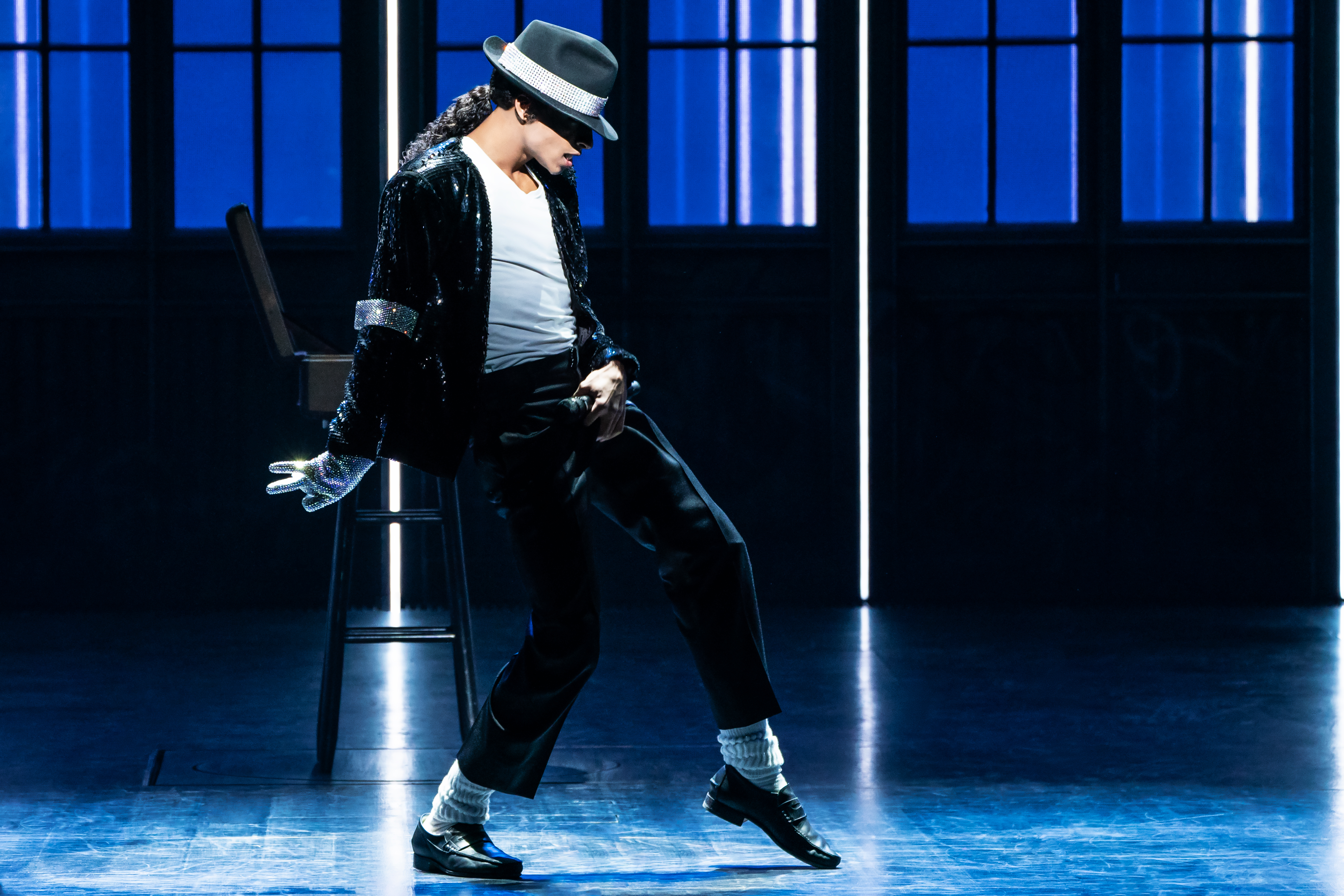 The thrills start early. Ten minutes before “curtain,” an assemblage of dancers, back-up singers, security staff and recording technicians begin to populate what we quickly recognize as a rehearsal studio. A buzz of excitement builds with every announcement that the star is five minutes away, then three, then…By the time Jackson – immediately knowable with his slight frame and hunched posture, his loose-fitting clothes, his presence – quietly ambles in, the rehearsal space – and the Neil Simon Theatre stage – is primed for action. Mingling and genial chatter gives way to the shapes, forms and sounds that we recognize from the very first note: “Beat It.”

No sooner has the song ended than MJ establishes its central theme: Jackson as a quiet but firm taskmaster, as exacting in his own quest for perfection as his abusive father had been. In the soft, fey speaking voice we all know, Jackson keeps everyone in line with his vision: “Thank you, beautiful work,” he all but whispers after the final notes of the first song. “Loved the harmony. But, Keith, you keep stepping all over my vocals. Can you pull back a little?…you gotta take your cues off of me. Remember, the melody is king, ease into the pocket and you’ll have no problems…And Rob, what if we change things up, just now I began seeing something more abstract…”

Over the course of its two acts, MJ presents one hit after another, the orchestrations and arrangements by David Holcenberg and Jason Michael Webb a fitting testament to Jackson’s impossible standards, and Gareth Owen’s superb sound design capturing each and every intricate rhythm. The songs breathe fire.

And what songs they are, nearly three dozen of them. Sticking roughly – very roughly – to real-life chronology, MJ offers up tunes from the Jackson 5 era (“ABC,” “I’ll Be There,” “I Want You Back,” “The Love You Save”) through Michael’s early “Rock With You” solo period, the triumphant Thriller (“Thriller”, “Wanna Be Startin’ Somethin’,” “Human Nature,” “Billie Jean”) and beyond (“Bad,” “Smooth Criminal,” “They Don’t Care About Us”).

As with other stand-outs of the jukebox genre – Ain’t Too Proud, Jersey Boys, Tina – Nottage’s book and Wheeldon’s direction/choreography tap into collective nostalgia without sacrificing of-the-moment vitality. Will younger audience members be as delighted as Boomers by the faithful recreation of the still astonishing “Dancing Machine” (complete with Michael’s Robot)? Or with that culture-rocking Motown 25 rendition of “Billie Jean” that introduced the glove, the hat and the moonwalk? Hard to imagine they wouldn’t be. 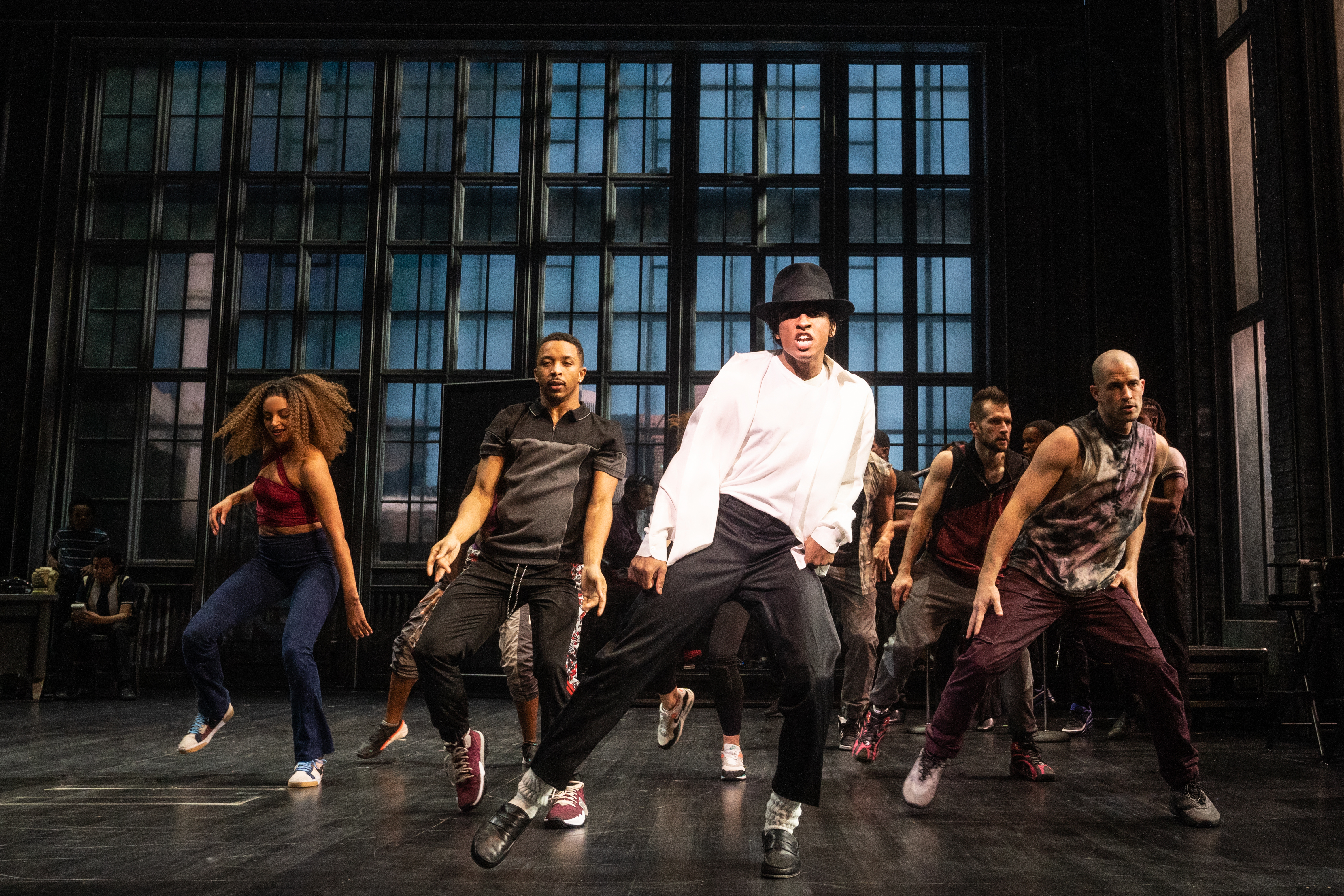 Aside from an excellent cast (more about that later) and the speaks-for-itself source material, MJ is distinguished by a visual spectacle that would have dazzled the King himself. Set designer Derek McLane transforms that immense rehearsal space into, by turns, the intimate confines of the Jackson childhood home, the set of Soul Train and, in one of the musical’s showstoppers, the haunted graveyard of the “Thriller” video.

I say one of the showstoppers because they come fast and furious: A press conference table – upended with Michael atop it – becomes a small stage within a stage. Or later, when Jackson acknowledges his dance heroes by showcasing (and augmenting) the styles of Bob Fosse, Fred Astaire and the Nicholas Brothers. Or when a wall explodes into glass shards, tabloid headlines projected onto each one. (Peter Nigrini’s gorgeous projections make yet another case for a separate Tony Award category, so much do they add to Natasha Katz’s flawless lighting design).

Like Diana, The Musical before it, MJ even gets applause for its (yes, overused word) iconic costumes. Not only does costume designer Paul Tazwell get every last stitch of Jackson’s famous fashions just right, from the black sparkly jacket, the too-short pants, the gold brocade waistcoat, the “Beat It” red leather), but he takes great care in outfitting the supporting players in styles that are as appealing as they are era-correct. (Oddly, the only notable slip-up comes with that press conference, when Tazwell dresses the flock of reporters in long black coats, apparently to resemble a flock of vultures; flapping around in a choreographed manner nearly identical to a similar scenein Diana, the effect, then and now, is on-the-nose and silly).

As the primary Michael – there are three incarnations – Myles Frost, in his Broadway debut, brings a fully formed presence to a career-launching performance. His singing and dancing mimicry – that’s not a slam – is immaculate and his acting chops are more than up to the task of giving emotional dimension to this endlessly imitated man. Nottage’s book goes heavy on the armchair psychology – Michael Jackson’s artistic brilliance was inseparable from his self-destruction, and both stemmed from the stern (to put it ludicrously mildly) no-excuses heavy hand of father Joseph Jackson (well- played by Quentin Earl Darrington, doubling, in the production’s clever approach, as Rob, the Dangerous tour boss).

As the middle (post-Jackson 5, pre-Dangerous) Michael, Tavon Olds-Sample nails the jitters and impatience of an artist just beginning to come into his own, while Christian Wilson (at the reviewed performance; he shares the role of Little Michael with Walter Russell III) does that famous purple hat-and-fringed-vest ensemble proud.

Also notable among the large cast: Ayana George as Jackson matriarch Katherine, and Gabriel Ruiz as the star-struck MTV cameraman Alejandro. Only Whitney Bashor, a fine singer when she finally gets the chance, is let down by her material: As the MTV producer Rachel, she can do little to enliven the reams of Wikipedia exposition heaped on her.

Could a jukebox musical survive without such audience-leading devices? We can only wonder. Nottage, winner of two Pulitzer Prizes for drama (for Ruined and Sweat) and author of this season’s excellent Clyde’s and Intimate Apparel, hasn’t come up with an alternative, and if anyone is up to the challenge it would be her. Time and again in MJ she demonstrates a real ability to walk thin lines, perhaps most notably in the Joseph Jackson character. While giving voice (maybe too much voice) to the familiar apologia (offered most recently by Jackson’s sister Janet Jackson) that the family owed its success to the patriarch’s unforgiving and demeaning approach, Nottage and MJ ultimately make clear that the abuser was (hint, hint) a monster to rival any horror film.

As for what would come for Michael Jackson – the child molestation allegations, the ever-more-serious addictions, the spiraling paranoia, the tragic, absurd and lonely demise – MJ stops before it all starts. How could it otherwise? Not even a writer as gifted as Nottage could walk a line so thin that she squares the Michael Jackson of Thriller with the Michael Jackson of Leaving Neverland. The rest of us can only try to forget one for the other, and MJ makes it thoroughly, unnervingly easy to do. 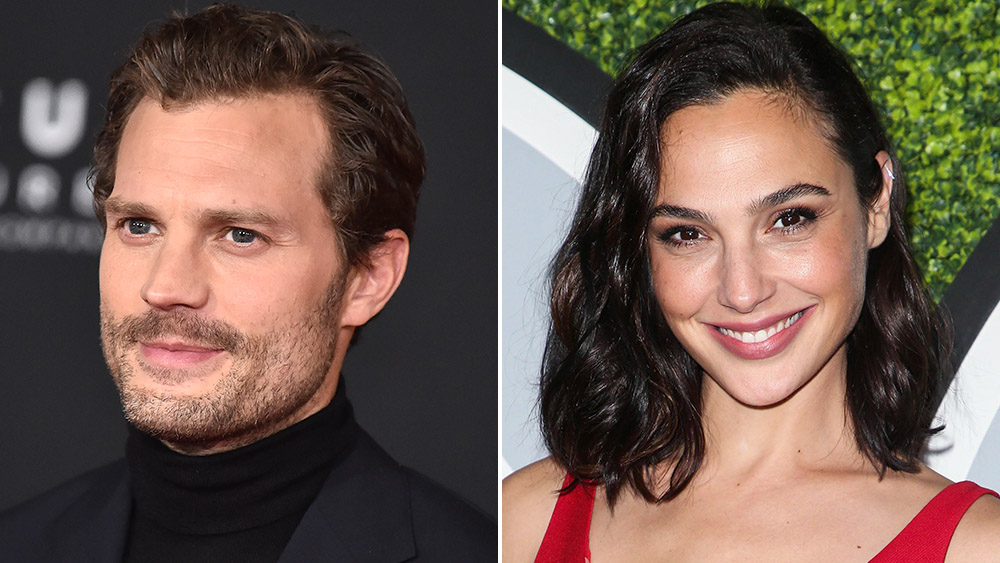 ‘Jackass Forever’ To Punk ‘Moonfall’ As Exhibition Looks To Thaw Out: Weekend Preview 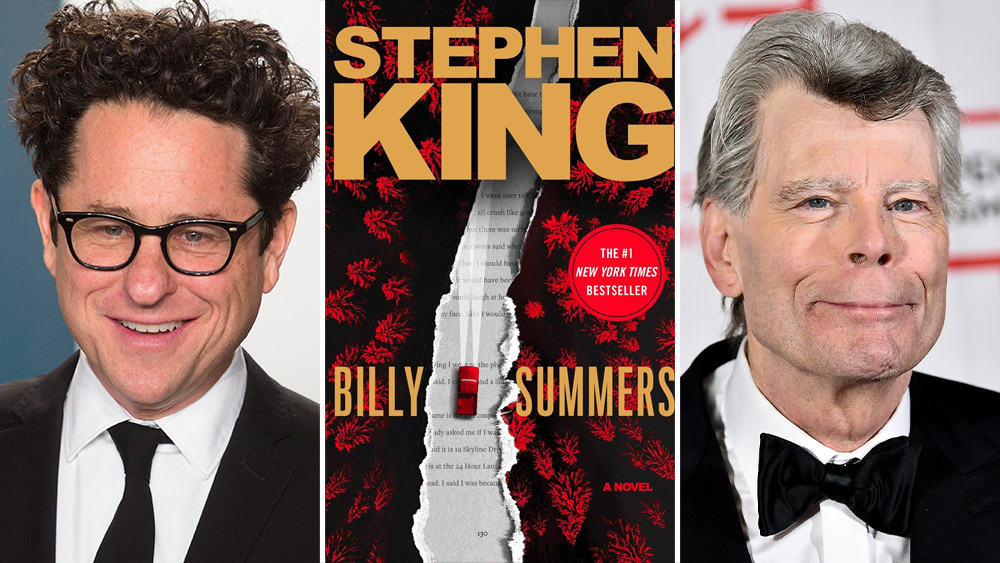 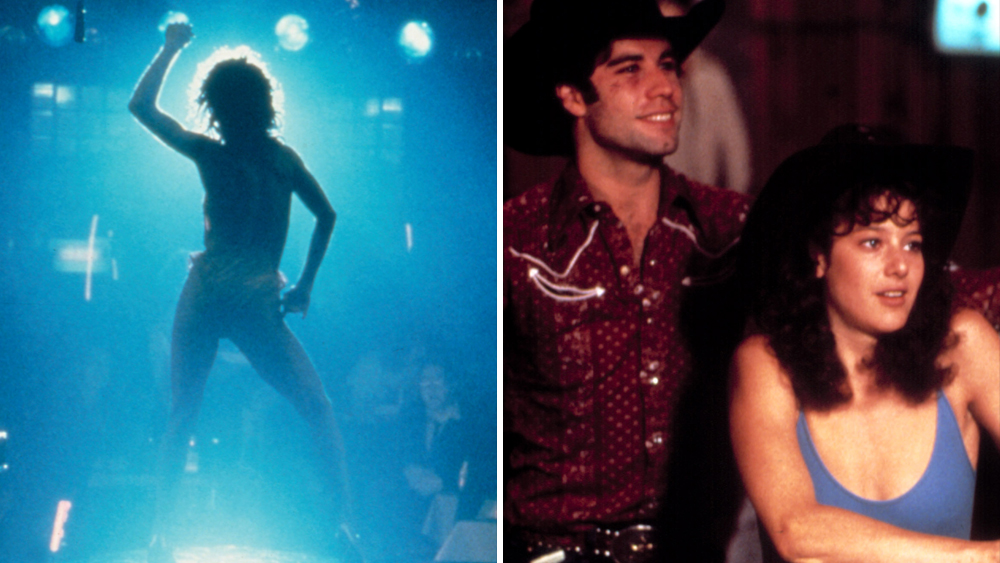 This Is the Shortest Living Dog Breed in the World

This young couple earn $168,000 a year—here's everything they spent in a week, including a 5-day vacation