The government is drawing up a relief package for industry with steps such as relaxation of asset-classification norms by banks, thus allowing companies to delay the repayment of loans, and tax holidays for the worst-hit sectors like aviation and hospitality.

But it might not be enough to stop more bankruptcies from getting filed. 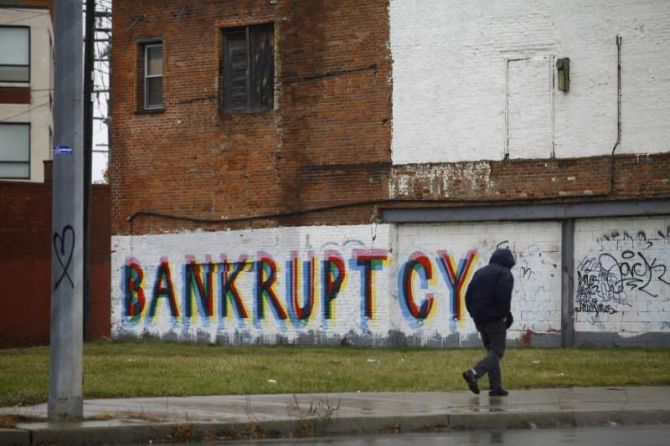 A promoter of a stressed mining company had been working with financiers for weeks, almost ready with a plan to reach a settlement with the banks.

The deal was about to be closed.

But last week, the investment committee formed to give a final go-ahead refused to discuss the plan due to the changed market dynamics amid the COVID-19 pandemic.

The company, a person close to the matter said, is now facing the threat of bankruptcy.

“Many funds who invest in such assets do it through their indirect portfolio which includes stocks, mutual funds etc…markets have tanked and now funds are in deep trouble,” he said.

As COVID-19 grips the markets and economy, companies are bracing for the impact it would have on bankruptcies – both new and ongoing.

“There is an impact on bankruptcy proceedings.

“Acquirers don’t want to evaluate the assets in these uncertain times. Many acquirers are also facing liquidity crunch due to impact of stock prices as well as business lockdowns in many states.

“This will push back many deadlines for ongoing corporate insolvencies,” said Anshul Jain, partner, PwC India.

The government is drawing up a relief package for industry with steps such as relaxation of asset-classification norms by banks, thus allowing companies to delay the repayment of loans, and tax holidays for the worst-hit sectors like aviation and hospitality.

But it might not be enough to stop more bankruptcies from getting filed.

Finance Minister Nirmala Sitharaman’s announcement on Tuesday that after monitoring the situation the government might consider suspending the provision for triggering insolvencies for a period of six months under section 7, 9 and 10 of the Insolvency and Bankruptcy Code could bring a much needed breather for companies.

“If the situation continues beyond April we may consider this…so companies can be stopped from being forced into insolvency proceedings for such force majeure causes of default,” Sitharaman said.

The code allows operational creditors and promoters themselves to trigger insolvencies.

Experts say while financial creditors such as banks may not go through that route, the operational creditors are already thinking on these lines.

Many are considering invoking the force majeure clauses which refer to unforeseeable circumstances that prevent someone from fulfilling a contract.

While contracts where the government is a party, such as a road contact with the national highway authority of India, there is no impact of such clauses, but when a private party comes into the picture such clauses are a cause of worry.

“The government is looking at it more liberally…But in a lot of private commercial contracts, epidemics or health emergencies are not considered as force majeure.

“This is impacting even genuine cases where the delay is not intentional but is forced due to this pandemic.

“But parties are considering that as an event of default for those contracts.

“It’s a matter of time that we will start seeing those litigations appear in courts and NCLTs,” Jain said.

As far as filing insolvency applications goes, there could be a rise.

However, how many of these will be admitted by the National Company Law Tribunal is still a matter of question, given the circumstances.

In case of homebuyers, if a builder is unable to deliver the project because some equipment such as elevators is to be imported from China, the tribunal may take a view in favour of the builder.

On the supply side, China is an important source of critical inputs for many sectors.

The lockdown in China has resulted in supply disruption for sectors such as chemical and chemical products, electrical and non-electrical goods, metals and Textiles.

A recent study by State Bank of India said supply shock was akin to higher price of inputs, which in turn affects the price of all the commodities up the supply chain.

“A simultaneous demand and supply shock to the economy will have implications for the banking sector.

“The demand side shock is expected to lead to an output loss of 1.2 per cent in banking and insurance combined,” the study said.

“Extension has to be given to the companies to be declared NPAs. We have to give time to society to settle down,” said Soumya Kanti Ghosh, chief economic advisor, State Bank of India.

However, industry experts said many would also try to take advantage of the situation and blame the delay or non-delivery of projects on the COVID-19 pandemic.

“Supply chain shock will be felt across the board. Shock like this will be hard especially in the physical sector. This will also impact formation of new companies,” said Chinmay Tumbe, economics professor, Indian Institute of Management, Ahmedabad.

In 1918-19 as an after effect of the influenza or the spanish flu which claimed over 15 million lives, there was a steep decline in the number of new companies registered.

The new paid up capital had declined from Rs 250 crore to Rs 20 crore, according to research done by Tumbe.

“After every crisis whether it was the 2008 financial crisis or the more recent demonetisation, the number of total companies drops drastically. Many companies may get struck off in this crisis,” Tumbe added.