Four years ago, Dave Lewis, the boss of Tesco, ran a “doomsday” management exercise in which UK’s biggest supermarket chain imagined its head office in Welwyn Garden City would have to shut down completely.

“At the time people said it was a bit ridiculous and extreme,” says Lewis.

As it turns out, it wasn’t extreme at all, and now looks extraordinarily prescient.

Fewer than 30 people have been working at the giant grocer’s vast campus in Hertfordshire, which usually houses about 6,500 workers, in the past six weeks. Lewis is one of them, popping in from his nearby flat on a regular basis.

British supermarkets draft in army of temps to ‘feed the nation’

Thanks to a plan informed by that doomsday exercise, Tesco already had the kit in place for remote working. Some teams have been using Zoom calls to gather hundreds of staff together for about two years.

In January, Tesco’s first concerns about the coronavirus were focused on ensuring its non-food ranges were not affected by the impact of the outbreak in China.

But by the end of that month the supermarket had spied big potential problems looming, and had a crisis response group in place which was holding daily meetings.

As the UK government dithered on implementing a national lockdown, Tesco’s chief executive signed off the retailer’s plan to help feed the nation in mid-February.

Lewis, 55, who is to leave the retailer in October after six years in the job, says Tesco has since “changed fundamentally” how it operates. 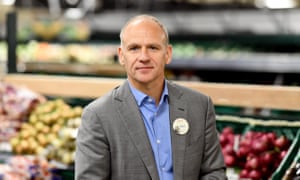 The most visible change is in stores, with one-way systems, physically distanced queues and protective kit for staff.

Lewis says the industry has now “bounced back” from the shock when panic buying set in and shoppers loaded the equivalent of the peak-Christmas trading day into their baskets for five days on the trot.

“Our biggest day of the year is normally 23 December. We know when that is and have all year to plan for it,’ says Lewis. “With no notice we had five days at that level and no chance to plan. In certain categories we were selling seven weeks’ worth of sales in five or six days.

“That pace in demand is unbelievable. The whole industry emptied the front end of the supply chain and then we had to recover.”

Lewis says it has been an “absolute privilege” to work with teams who have shown “great spirit” in tough conditions in stores and adapted rapidly to change.

“We’ve seen difficult things, but also humanity and acts of kindness I don’t think I’ve ever seen before. It has been hugely humbling,” he adds.

Lewis says shortages have now disappeared in all but a handful of categories, such as flour, but the way people shop has altered dramatically. 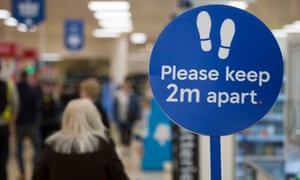 The big weekend shopping trip has disappeared in favour of a steady flow of shoppers throughout the week.

Instead of visiting an average three or four different shops to keep topping up their fridge, shoppers now rarely visit more than one, and have returned to a big weekly stock up any day of the week.

The retailer took on 47,000 additional staff within days to help cope with demand although at least 7,000 of those have already been stood down, partly as regular staff have returned.

Off our trolleys: what stockpiling in the coronavirus crisis reveals about us

There may be fewer visitors in stores but sales remain strong, according to Lewis. “Transactions last week were down by 48% but our basket size more than doubled. People are going back to shopping once a week.”

But perhaps the most dramatic change has been on grocery home shopping. Tesco has nearly doubled capacity for delivery and click & collect slots in just six weeks as demand has soared, especially from vulnerable and sick shoppers.

The retailer has reached its target of offering 1.2m slots a week, and Lewis says the grocer is now aiming to offer 1.5m slots within the foreseeable future.

Unlike online specialist Ocado, which uses robot-driven warehouses to pick groceries, 90% of Tesco’s home deliveries are picked by hand in stores. That has given it the flexibility to expand by about two Ocado-sized businesses in just six weeks. 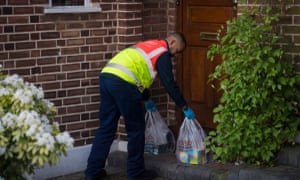 To meet that demand the first big change was to switch the opening hours of the 350 stores where it picks home shopping orders, from 24-hour trading to daytime opening hours, so that more orders could be picked overnight.

Refrigerated lorries were parked in Tesco car parks so shoppers could order online and then pick up their groceries in their own vehicle. 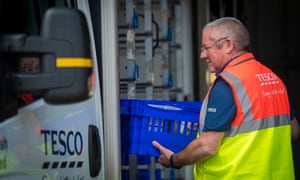 Lewis says they are breaking records, but still not meeting demand: “Last week we picked over 10m items [for online orders] in one day for the first time. We don’t think there is a business anywhere in the world that does 1m food orders a week like us, but there are still people out there without a delivery slot.”

The 1.5m target will partly be achieved by extending click & collect, with 15 more sites due to open this week.

Improvements on the computer algorithms which drive picking technology and the growing expertise of new pickers hired to cope with the surge in demand will also help.

Tesco has another weapon in its arsenal. Before lockdown the retailer was just three weeks away from completing the build of its first mini robot-driven distribution hub in the back of a stores, in partnership with the robotic supermarket specialist Takeoff. Once construction is allowed to restart, that facility could rapidly help deliver groceries ordered online more quickly and efficiently.

The virus is expected to continue to cause disruption in stores until the end of the year at least, and no one knows whether shoppers will continue to be so keen on shopping from home once, hopefully, Covid-19 becomes a distant memory.

“We don’t know ,” says Lewis, but picking from stores means they can “flex up and down” and “follow demand”, says Lewis.

He says the ability to increase capacity has helped Tesco answer the government’s call to get food to the up to 400,000 people it had identified as extremely vulnerable to the virus, such as cancer patients, and those without regular support.

But there are not enough delivery slots, and never will be, Lewis says. “There is more demand out there but we can’t meet it all.

“Even if capacity triples across the whole industry, which is something very difficult to do in a short time, there will still be 80% of the market that needs to visit a store. That’s why we need to make shopping environments as safe as possible.”

Rolls-Royce Cullinan is truly a work of art