There was no announcement from the government on guaranteeing a minimum basic income, which is the need of the hour. The announcements on portability of ration cards and affordable rental housing to workers are for the long and medium terms. Migrant workers need immediate relief. 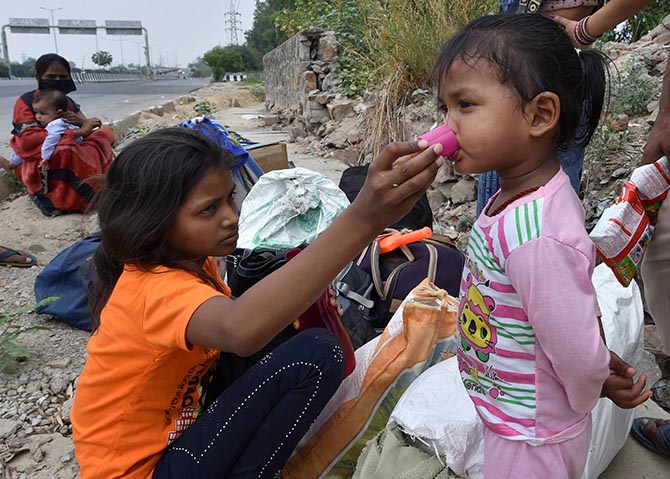 Experts called for more measures to take care of the needs of migrant workers from the central government that announced a set of measures on Thursday.

There are two types of migrant workers that may need further assistance – ones who have gone back to their home states and are in search of jobs and the other set that are still stranded in cities with no income and resources, experts said.

“The piece-meal approach adopted by the central government to deal with the COVID-19 crisis will be of little help.

“Migrant workers need immediate relief. There was no announcement from the government on guaranteeing a minimum basic income, which is the need of the hour,” lawyer and activist Anjali Bhardwaj said.

Bhardwaj, who has been helping migrant workers since the national lockdown was imposed in March, had moved the Supreme Court, along with activist Harsh Mander, seeking a direction to the Centre and states on payments of minimum wages to all migrant workers.

“The announcements on portability of ration cards and affordable rental housing to workers are for the long and medium terms.

She said the government should universalise the distribution of foodgrain, as a targeted scheme leaves scope for exclusion, as has been witnessed during the lockdown.

Migrant families that are not covered under the National Food Security Act or any state government scheme will be provided 5 kg of grain and 1 kg of chana per month.

The benefit will be passed on to 80 million migrants for two months, Finance Minister Nirmala Sitharaman announced on Thursday.

“How did the Centre arrive at the 80 million figure? Who will be considered a migrant for availing this facility? We will have to wait for the fine print,” Bhardwaj added.

One of the key issues faced by migrant workers during the lockdown was their inability to afford house rent or get proper accommodation.

Sitharaman emphasised that the workers who have returned to the villages will be given jobs through the Mahatma Gandhi National Rural Employment Guarantee Act (MGNREGA) and the Centre has already written to states in this regard.

Radhicka Kapoor, senior fellow at Indian Council for Research on International Economic Relations (ICRIER), suggested that the government frame an urban employment guarantee programme to incentivise migrant workers to return to cities, along with increasing the number of days per household for work under MGNREGA scheme.

“Reverse migration will compound the agrarian distress in the absence of non-agricultural jobs in villages.

“It will affect income levels and to avoid the problem of crowding, MGNREGA needs to be strengthened.

“The government can increase the number of days,” Kapoor said.

The MGNREGA scheme provides at least 100 days of guaranteed wage employment in a financial year to every rural household whose adult members volunteer to do unskilled manual work.

However, the number of household members willing to work in villages might rise because of the reverse migration.

“We require an urban employment generation scheme, especially looking at the difficulties faced by workers in returning home and the level of unemployment that will follow.”

Univision Takes Stake In MMA Circuit Combate Global, Whose Bouts It Has Aired Since 2018