Director and choreographer Camille A. Brown and her cast of seven female singer-dancer-actors breathe life and vitality into Ntozake Shange’s still-potent mid-1970s touchstone for colored girls who have considered suicide/ when the rainbow is enuf. Opening tonight at the Booth Theatre on Broadway, Shange’s fantasia of poetry, dance and stories of confession, defiance, sisterhood and, above all, perseverance, holds a power that’s not been weakened either by decades or the loss of a once startling newness.

Shange called her mix of spoken word set to dance and movement a “choreopoem,” a word as lovely and evocative today as it was when for colored girls (as it’s often abbreviated) began Off Broadway performances back in 1974. If the word itself seems tied to its era, the form would take root and work its influence on any number of theatrical works in any number of decades, from The Vagina Monologues of the 1990s to this season’s Thoughts of a Colored Man.

For such a seminal work, for colored girls feels like anything but a museum piece under the guidance of Brown, her each and every cast member, and a design team – sets by Myung Hee Cho, costumes by Sarafina Bush, lights by Jiyoun Chang, sound by Justin Ellington, projections by Aaron Rhyne, and hair & wig by Cookie Jordan – that combine into a sumptuous whole.

The premise is clear from the start: A group of seven Black women, each identified only by her color of costume, a whimsical touch that gives the title at least one other layer of meaning, take to the stage in a commingling of movement and music, Juba blending with hip-hop and ballet and avant-garde, all developing in strength and union before the first tale is told. 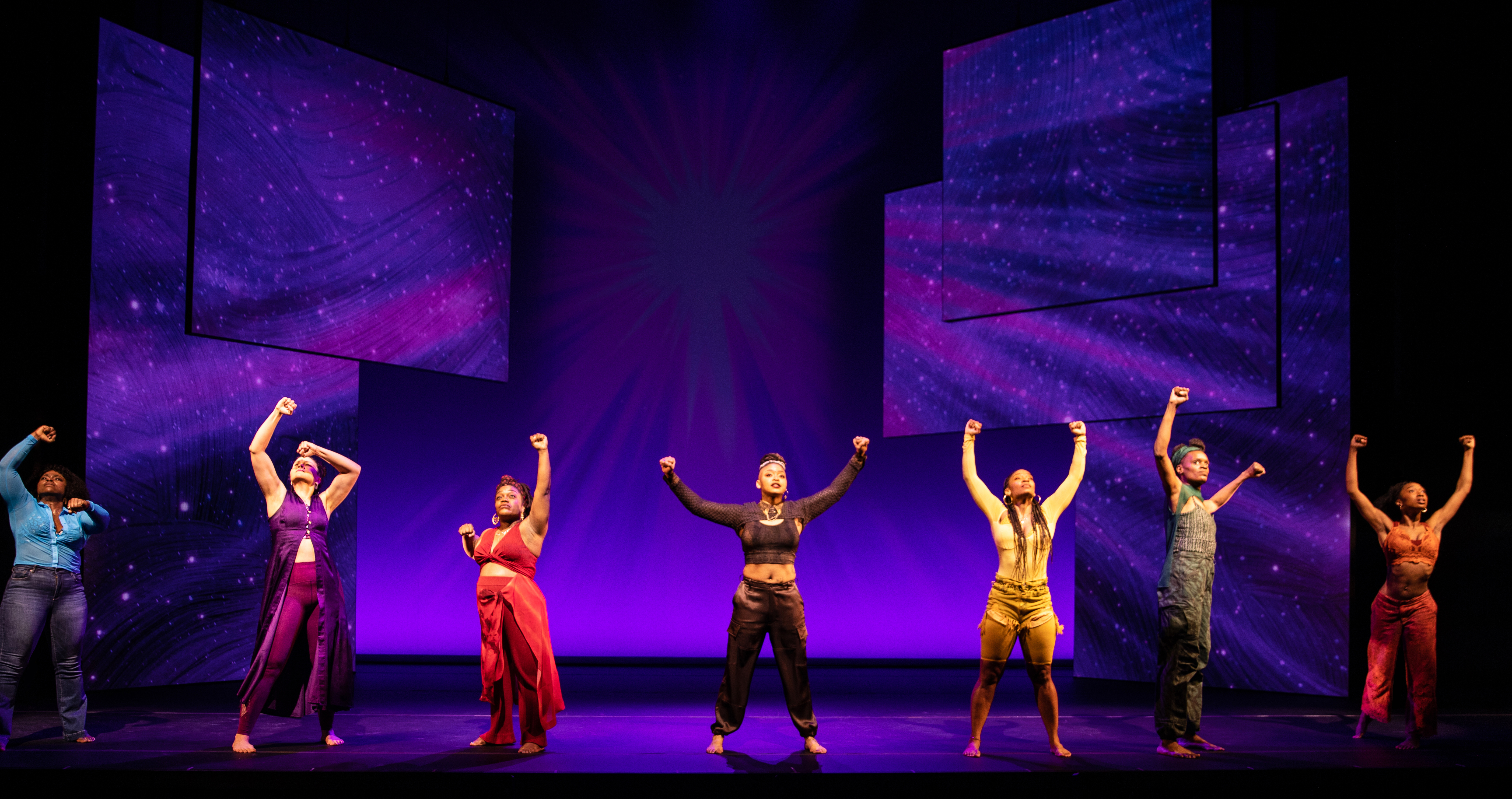 From there, the characters will tell or sing or sign or dance their stories, though Brown rarely allows the stage to remain unpopulated by the soloist’s comrades. By twos or threes or all seven, the women move and respond and embrace, sometimes physically, the storyteller.

And so we hear Lady in Yellow (D. Woods) recall a graduation party that would change her life, and Lady in Brown (Tendayi Kuumba, late of David Byrne’s American Utopia) summon up memories of her precocious childhood worship – through the books she loved – of Haitian revolutionary Toussaint Louverture. Lady in Blue (Stacey Sargeant) delivers the scalding “i used to live in the world” soliloquy that ends with one of Shange’s great lines of poetry: “I had a right to the world. Then I moved to Harlem for six blocks of cruelty piled up on itself, tunnel closing.”

That speech is topped in ferocity by one of the play’s most popular highlights: Lady in Green’s “somebody almost walked off wid alla my stuff.” Delivered with locomotive force and rhythmic ingenuity by Okwui Okpokwasili, the poem of independence and reclamation retains its power after all these years.

Each cast member is as compelling as the next, some of their segments more impressionistic than narrative. Of those not already mentioned, there’s Amara Granderson as Lady in Orange and deaf actress Alexandria Wailes (who mostly signs her dialogue) as Lady in Purple. Those two team up to convey the story of a St. Louis woman away from home:

sechita/ waz anxious to get back to st. louis/
the dirt there didnt crawl from the earth into yr soul/
at least/ in st. louis/ the grime waz store bought second-hand/ here in natchez/ god seemed to be wipin his feet in her face

As is tradition, the play nears its close with a searing tale of spousal abuse, violence and tragedy, recounted by Lady in Red (Kenita R. Miller, giving 1000%). An unspeakable horror is brought into the open, confronted and lamented. The director once again summons all the cast members to the stage, not for anything as simple as hugs and condolences but for dance and poetry and music, driving home the message yet again that for these women, survival and endurance is inseparable from sisterhood. In one another, they find themselves.

Nikola CEO: GM is helping us drive down cost

Here are five charts tracking the U.S. economy amid the coronavirus pandemic