Sitting behind the wheel of Aston Martin’s new luxury SUV in Wales last week, Prince Charles was marking his own anniversary with the carmaker.

It is 50 years since the Queen gave him an Aston Martin Volante for his 21st birthday – a half-century in which fortunes for both the prince and the company have peaked and troughed .

Many executives at the car manufacturer would be forgiven for wanting to be transported back five decades, considering the fraught times that it has gone through of late.

Last month, a £500m rescue deal led by the Canadian billionaire Lawrence Stroll saved the company from collapse, as its huge debt pile threatened to cause it to go bust for the eighth time in its 107-year history.

This Thursday will see the announcement of full-year results for 2019, but investors have already been warned to expect bad news. Last month, the company issued its second profit warning in 12 months after flagging a “very disappointing” year of falling sales and higher costs. It predicted adjusted profits of between £130m and £140m for 2019 – almost half the £247m it made the previous year and well below analyst forecasts of £196m. Aston Martin blames a decline in cars sold through dealers alongside higher marketing costs and a fall in its average selling price.

The price of the company’s shares has plummeted since they launched on the stock market in October 2018 at £19. They now sit at just above £4, prompting some analysts to describe Aston as the one of the biggest flops on the market in recent memory, at a time when there is a lot of competition for luxury cars. The value of the company at launch was £4bn, but it had plummeted to £1bn by the beginning of this year. 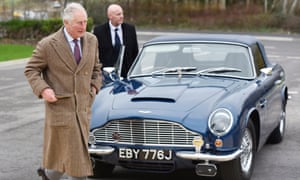 Aston’s chief executive, Andy Palmer, has said the company was forced to discount more heavily than intended to sell cars at the end of last year, and paid higher-volume bonuses to dealers in a big sales push in December.

The company is now pinning its hopes on the new DBX sports utility vehicle, for which it has received 1,800 orders since its launch in late November. It hopes the £158,000 4×4 will widen its appeal to wealthy women – nearly all its current customers are men. Deliveries from Aston’s new factory in St Athan will commence between April and June.

The rescue deal led by Stroll includes an investment of £182m in return for 16.7% of the struggling carmaker, and includes an immediate £55.5m capital injection.

Stroll’s consortium includes business partners from many of the fashion investments in which he made his fortune, together with Anthony Bamford, chairman of the digger maker JCB, who is also known for his political donations to Boris Johnson and the Leave campaign. Forbes estimates Stroll’s net worth at $2.6bn.

On Friday, Charles joined a reception to celebrate the factory, placing a winged badge on the front of a DBX that will be located in the reception area of the company’s newest facility. Both staff and investors – and probably 007 too – will be earnestly hoping that this is ninth time lucky.