The men — and it’s almost always men — who run hedge funds don’t speak publicly, and they definitely don’t like doing so in front of Congress.

But compared to the last time Citadel founder Ken Griffin sat in front of a congressional panel, Thursday’s hearing on last month’s GameStop-addled market frenzy comes at a much more pleasant time.

In November of 2008, roughly two months after Lehman Brothers went bankrupt with the housing market in ruins, Griffin along with fellow hedge-fund billionaires Jim Simons, George Soros, John Paulson, and Philip Falcone answered questions for two hours on whether there needed to be more regulation on hedge funds. While Paulson famously made billions on the collapse of the housing market, Griffin did do not nearly as well — Citadel, then 17 years old, was slammed by Lehman’s collapse, with funds down more than 30%.

Of course, Citadel survived and has since thrived, hitting its 30th anniversary with more assets than ever while Griffin’s separate market-making business, Citadel Securities, continues to grow its market share.

This time around, it’s a different hedge-fund golden boy who is down big as he steps up to mic in front of Congress: Melvin Capital founder Gabe Plotkin.

The two hedge funds are being called to testify as Congress examines the links between social media, short-selling, and retail traders. Along with Griffin and Plotkin, Reddit cofounder and CEO Steve Huffman, Robinhood cofounder Vlad Tenev, researcher Jennifer Schulp, and GameStop trader Keith Gill, also known as Roaring Kitty on Twitter and YouTube, will also testify.

Plotkin’s fund lost more than half of its assets in January thanks to a large short position against video-game retailer GameStop. The stock jumped to prices more than 20 times what it started the year at in late January as traders on popular Reddit forums like Wall Street Bets using apps like Robinhood pumped up the stock — and targeted Plotkin specifically.

Griffin is in the spotlight for having roles on both sides of the saga. Citadel Securities was a key player in executing Robinhood users’ trades that catapulted GameStops shares last month, while his hedge fund came Plotkin’s rescue, infusing $2 billion into Melvin Capital as it got crushed.

Plotkin, who owns a minority stake in the NBA’s Charlotte Hornets and bought $44 million of property in Miami at the end of last year, may do what few – if any — wealthy hedge fund managers have done before: Ask for pity.

Melvin became a target of retail traders because it disclosed some of its bets against GameStop, in the form of put options, in a 13F filing months before the end of 2020. While well-known short-sellers like Andrew Left had publicly spoken about betting against the video-game retailer, Melvin’s disclosure showed investors in the r/WallStreetBets subreddit how much he had to lose if the stock went soaring.

It wasn’t just GameStop either; the Robinhood traders targeted other stocks Melvin had put options on, including Bed, Bath & Beyond and AMC.

The losses led to a bailout from Griffin and Plotkin’s former boss Steve Cohen to the tune of $2.75 billion.

In an opening testimony released ahead of the hearing, Plotkin defends his short position in GameStop saying it reflected the retailer’s fundamentals and that it never was part of an effort to “artificially depress or manipulate downward the price of a stock,” as some Redditors saw it.

He also addressed how he was personally zeroed in on the message boards.

“Many of these posts were laced with antisemitic slurs directed at me and others,” Plotkin said. “The posts said things like ‘it’s very clear we need a second holocaust, the jews can’t keep getting away with this.’ Others sent similarly profane and racist text messages to me.” 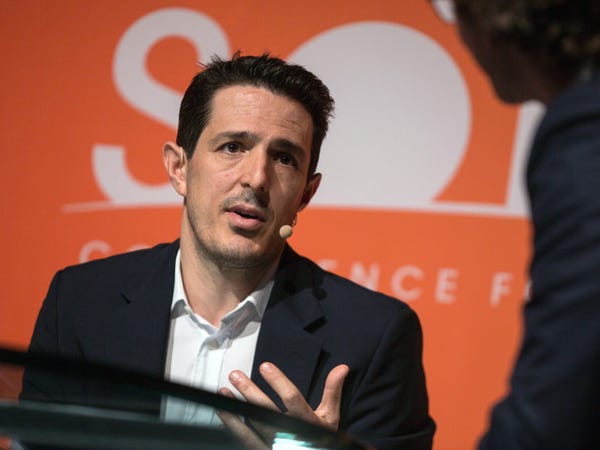 Retail traders’ attack on Plotkin’s hedge fund was highlighted by many people in the industry as something that needed to at least be checked out by regulators. Others think more drastic measures should be taken.

Leon Cooperman, in a CNBC interview at the end of January, said the day traders were using their stimulus checks from the government to trade stocks as “a way of attacking wealthy people.” One long-time hedge fund manager told Insider if people were to collude to send a stock price down by 80%, participants would likely go to jail. Another said the targeted trading would have been considered “extremely illegal” if it had been done by a group hedge funds instead “Reddit gangsters.”

Nonprofit Better Markets put out a memo Wednesday outlining the areas Congress should consider asking about and possibly legislating on, including “whether some class of retail investors demonstrably intended to engage in manipulative trading practices to effect a short squeeze.”

While Plotkin doesn’t strike a sympathetic figure in the middle of a pandemic that has costs millions their job, he could be backed in pushing for some type of oversight on this type of retail trading as more stories trickle out of big losses sustained by retail investors. Better Markets’ memo notes that “real people lost billions of dollars in GameStop trading.”

Robinhood already has come under fire from people as varied as Senator Ted Cruz to rapper Ja Rule for temporarily stopping certain tickers from being traded on its platform, and its cofounder Tenev will have to answer Thursday about its relationship with Griffin’s Citadel Securities.

Citadel Securities pays Robinhood and other online brokerages for its order flow — which is how these brokerages can offer users commission-free trades. The connection – between Griffin’s market-making firm and his hedge fund that backed hard-hit Melvin – sparked Reddit rumors about Griffin’s influence on the entire market.

According to Griffin’s prepared testimony, Citadel executed 7.4 billion shares on behalf of retail investors on Jan. 27 — more than the average daily volume of the entire US equity market in 2019.

The volatility in the markets and in the specific names give market makers like Citadel Securities wider spreads and more profits, though price discovery is more difficult when markets are as choppier as they were at the end of January.

Payment for order flow (PFOF) is a common industry practice and lowers the cost of investing for millions of retail traders. But Better Markets said in its memo that it “causes an inevitable conflict-of-interest between the retail broker-dealer’s duties to seek best execution for its customers and its duties to shareholders and others to maximize revenues.” The nonprofit recommends Congress “explore legislative solutions that would prohibit the practice.”

In his prepared testimony, Griffin argues that PFOF is the key reason retail investors are able to trade for free or low-cost today.

He suggests that any regulatory focus should be on shortening settlement cycles from two days to one instead.

Robinhood and other brokerages said they limited trades on “meme stocks” after Depository Trust & Clearing Corp., or DTCC — the central clearing and settlement organization for US stocks — raised collateral requirements for brokers in response to the market volatility.

“As we have seen, longer settlement periods expose firms to more risk in the time between execution and settlement, requiring higher levels of capital,” Griffin said.

Griffin, a big donor to Republicans who keep regulation to a minimum, may not be interested in any additional guidelines from federal agencies. In 2008, he lobbied for clearinghouses to be set-up for the derivatives market, but said: “it is not my belief that we need greater government regulation of hedge funds with respect to the systemic risk they create.”

“Our financial markets work best when they are competitive, fair, and transparent,” he said.

Here's the 14-page pitch deck that lays out how this contract-editing startup seeks to disrupt a $35 billion industry, which it used to nab $3.2 million from investors including DocuSign