Axminster Carpets, the Devon company that made a coronation carpet for George VI in 1937 and could trace its history back 265 years, has collapsed into administration with the loss of 80 jobs.

The company, which continued to supply the royal family and had recent commission for Buckingham Palace, appointed the administrators Duff & Phelps on Wednesday after failing to secure a rescue deal. Axminster had also recently installed carpets at the US Congress and a Donald Trump hotel in Miami.

It is the second time the company has gone into administration in seven years. In 2013, the company was bought out of administration from Duff & Phelps by the local businessman Stephen Boyd. About 400 people lost their jobs in the 2013 collapse.

The administrators said they had immediately sold the company’s underlay business, Axfelt, to Ulster Carpets and expected to sell the Axminster carpet shop to Wilton Flooring. 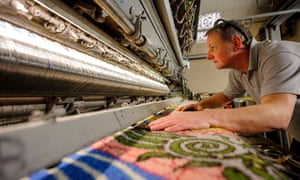 Duff & Phelps said it would continue to seek a buyer for the remaining assets and the famous brand, but had made the remaining 80 staff at the Axminster manufacturing site redundant. “A small number of employees will continue to work through the company’s order book,” the administrators added.

The luxury carpet maker was started by Thomas Whitty and subsequently run by four generations of his family before a fire destroyed the factory in 1835. But 100 years later Harry Dutfield heard about its rich heritage from a vicar in the Devon town and resurrected the business. The carpets then became renowned again for their quality.

Dutfield expanded and opened factories as far afield as New Zealand, introducing new techniques and materials. In the 1970s he met an antipodean professor who was developing a heavy fleeced strain of sheep that became known as a drysdale. Dutfield introduced the first flock to Britain in 1976, using their wool in Axminster’s carpets.