Availability of jobs at India’s auto companies has shrunk significantly over the last two years, as the industry goes through one of its worst slowdowns. More than 60 per cent of the total workforce fell by 24 per cent in 2019-20, against 2017-18. 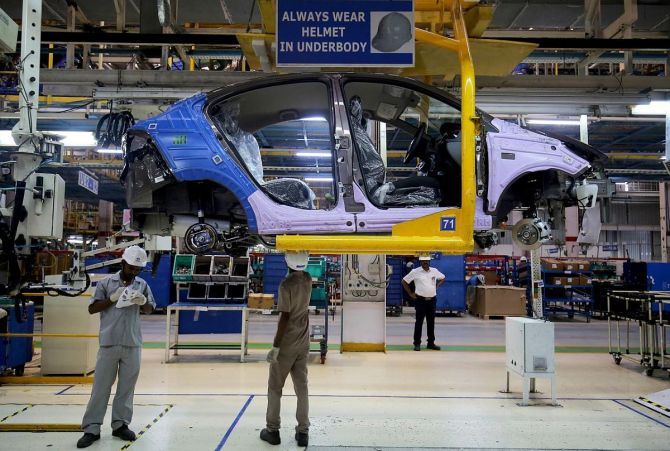 In July last year, as auto companies recorded their worst sale in 20 years, 35-year-old Sumit Lal, who worked as a fitter with one of India’s leading two-wheeler firm, was asked to proceed on “temporary leave” by his employer.

One year has passed since then and Sumit’s wait to return to Manesar – the country’s largest auto hub – continues.

He now works as a daily wager despite having a degree from ITI, Begusarai.

Availability of jobs at India’s auto firms have shrunk significantly over the past two years, as the industry goes through one of its worst slowdown.

Most firms said the slowdown had forced them to reduce number of temporary workers as they reduced production hours.

Temporary workers and student trainees are primarily hired for a cycle of seven to eight months.

Then, there are outsourced hires that are primarily engaged in non-core areas such as loading and unloading of raw material, security, and canteens.

The auto sector is one of the largest job drivers in India and on average employs 8 per cent of total employment in all industries.

As of March, the company hired 17,337 temporary workers, including student trainees, 11.4 per cent less, compared to March 2018.

The firm said there had been a contraction in demand in 2019-20 due to multiple challenges which was closely followed by Covid-19 pandemic.

“Passenger vehicle sales in FY20 fell 18 per cent, compared to the previous year.

“Manpower deployment changes according to volumes.

“The firm hires and trains temporary workers for a fixed period to meet these business exigencies,” a company spokesperson said.

He said despite production halting during lockdown, it didn’t lay-off any employee.

“We have paid wages and allowances during the entire lockdown period.”

Tata Motors, which has been trying to reduce its employee cost over the past few years, has almost halved the number of temporary workers to 19,169 in FY20, compared to 38,107 in FY18.

“Hiring of flexible workforce is directly related to volume of production, which, in turn, is aligned to market demand.

“Such a worker is engaged for a specific period when there is a surge in activity,” a Tata spokesperson said.

Mahindra & Mahindra’s temporary workforce dropped by 7.9 per cent in FY20, compared to FY18.

Managing director Pawan Goenka had earlier said that the carmaker had to retrench about 1,500 temporary workers in 2019 due to the slowdown.

“Temporary workforce may be rationalised when production isn’t at full capacity.

“As we ramp up, we look to increase manpower,” a spokesperson said.

Executives said job generation was likely to stay muted as they did not expect a revival in demand in the near future.

This is despite a significant number of workers migrating to their villages.

“The idea of hiring temporary workers is to have the flexibility to rationalise according to production demand.

“Presently, factories are operating at not more than 60 per cent capacity due to which there is not much requirement of labour,” said R C Bhargava, chairman at Maruti Suzuki.

For blue-collar workforce, new hiring will have to wait for a while, said Rahul Mishra, principal at consulting firm Kearney.

“Firms are scaling down operations. So, there is likely to be surplus labour availability in the near future,” he said.

Delta CEO: Our goal is to restore confidence in air travel